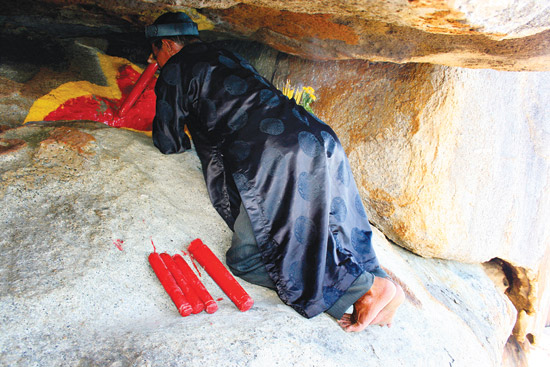 Heavenly sex for a good catch

Many fishermen in Khanh Hoa Province in south central Vietnam put their fishing nets at certain places and wait for the fish to be caught in them. They call it l??i ??ng.
To do l??i ??ng means to depend heavily on luck. Also, they can only fish for about half a year. Perhaps, that is why the l??i ??ng fishermen of Khanh Hoa have had a custom of worshipping sexual organs, symbols of fertility. People in Hon Do still keep this custom.
Hon Do in Ninh Phuoc Commune is an islet northeast of Hon Heo, off the shore of Ninh Hoa Town, Khanh Hoa Province, about 10km inland. The locals there say that the islet is called Hon Do (Red Island) because the rocks on the island look dark red at sunrise or sunset.
The islet is quite beautiful with white sand beaches, rocks of different sizes and shapes, natural reservoirs and temples.

On the south-eastern part of the island, there is a huge rock on which there is a small cave. Its mouth measures two metres and it is almost a metre high and more than three metres deep. The cave is about 15 metres above sea level.
At the bottom of the cave are two rocks laying side-by-side, creating a fissure, which looks like a woman’s vulva. The fissure is about 20 centimetres at its widest part. Standing a few metres away and looking into the cave, anyone would immediately recognize the shape as that of a woman’s personal anatomy. For generations, the fishermen on the island considered that fissure a goddess’s yoni that they, with respect, call L? L??ng, and they call the cave L? L??ng Cave.

Hon Do Island, near Nha Trang

In the past, fishermen painted the fissure with whitewash. Today, the fissure is painted red with a yellow outline. Nearby is a concrete altar. Next to the altar are five cylindrical wooden sticks about the size of a man’s forearm and they measure from 20 centimetres to 30 centimetres long. They are painted red and look like a man’s penis.
In the past, those sticks were kept in Bà L??ng Temple and they only brought them to L? L??ng Cave when a worshipping rite was held. Now, those sticks are kept at the altar to make it convenient for the locals to perform rites when they think it is necessary. The wooden sticks are of different sizes, as if they are intended for people of different ages.
About a dozen metres from L? L??ng Cave is Bà L??ng (L??ng Goddess) Temple. Bà L??ng Statue is made of porcelain accompanied by two ceramic horses on her sides.

The special fissure in the cave

According to the elderly, in the past, on the days the fishermen didn’t catch any fish, they sent a representative who got formally dressed and brought offerings to the cave. He picked one of the five wooden sticks and put it into the fissure three times. Then, it was thought that the fishermen could catch some fish.
Today, on spring and autumn worshipping ceremonies, the fishermen always bring offerings to Bà L??ng Temple and L? L??ng Cave. At the end of such a rite, the chief of the ceremony solemnly picks a [lingam] wooden stick to thrust into the fissure nine times. That ritual performance is a symbol of sexual intercourse, offered to please the Goddess so that she will help fishermen catch a lot of fish.

Text by Nguyen Man Nhien and photos by Hanh Nguyen