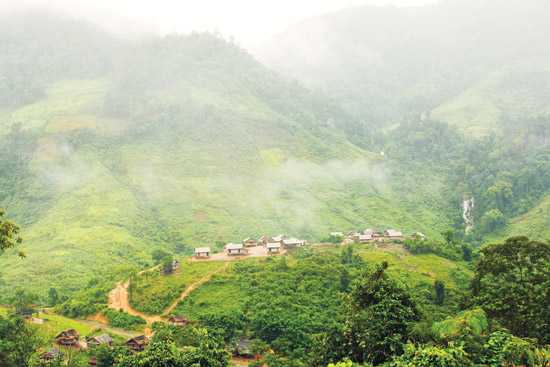 Ta Vong Village from a hill.

Ta Vong Village, Trong Hoa Commune, Minh Hoa District, Quang Binh Province, Central Vietnam, lies along the border between Vietnam and Laos. Viewed from the top of a nearby pass, the dozens of houses on stilts look like blurred music notes dancing on the slashing lines drawn by rain drops, amongst the rocking and rolling mountains and forests.
Ta Vong Village used to be about two kilometres from its current location, deeper in the mountains on the other side of the Ta Leng Spring. But it was dangerous there during the rainy season, because of the steep slopes. In 2010, a whole mountainside slid down to the spring. Seeing the potential danger, the local government persuaded the villagers to move to the current location, on a hill. The new, strong houses, built with support from PetroVietnam, were constructed at the beginning of 2012.
In the plans for sustainable livelihood for the population in the buffer zone of the Project of Nature Conservation and Sustainable Resources Management of the Phong Nha – Ke Bang National Park, Ta Vong was chosen to develop community tourism. Three households in the village will be selected to host tourists.
I joined a group of representatives from travel companies and local officials in a trip to Ta Vong to explore its tourism potential. Smiling warmly and shaking our hands under the first rain of the season, village elder Ho Khien couldnâ€™t hide his emotions. â€˜So glad you come even in the rain. I thought the big water had dampened your will. I would be so sad then.â€™ He signalled for the village young men to carry our luggage to his house. Meanwhile, Ho Thi Pang, Ho Khienâ€™s wife, quickly pounded a handful of fresh green tea leaves, put them in a pot and boiled them for his guests. Ho Khien explained, â€˜The tea tastes and smells better if pounded like thisâ€™. Indeed, the sweetness and the peculiar aroma of the thick, hot tea made me feel warm and comfortable, despite the rain.
My first impression was that the village was very clean; perhaps partly due to the custom of living high in the mountains, where the spring begins. The people were warm and smiling. The kids were timid, hiding behind doors, curiously studying us.
Ta Vong Village has 25 households, with 136 persons, mostly Chut ethnics. Among our hosts was also Ho Xep, the eldest of the village, an 87-year-old man, but still strong and sound. Ho Khien was his eldest son.
Walking us around the village, Ho Khien said, â€˜Right now, water is conducted from the source to a common container shared by the whole village. The communeâ€™s primary school is right down the hill, and Ta Vong also has a kindergarten.â€™
Ta Vong has no electricity yet. For the guests that night, Ho Khien had a tiny, dim bulb connected to a few batteries in a bamboo tube.
Lunch, prepared by Ho Thi Pang, consisted of forest banana flower, spring fish, boiled forest vegetables and rice. All was served on a very beautiful rattan tray. Mr Dinh Tien Dung, Trong Hoa communeâ€™s cultural officer said, â€˜The local government is persuading the villagers to stop slashing the forest and farm only on land that was already cleared. Up here, they can only plant low-yield rice, alternating with cassava, corn and sweet potato.â€™ The government subsidizes the villagers with 15kg of rice per person per month during the first five years of farming, to stabilize their lives.
We ate and talked, our spirits fermented by rice wine. From time to time, old Ho Xep pensively and with much melancholy pointed at a high mountaintop on the other side of the spring, â€˜Our village used to be there. Moving around was hard because the slopes are so steep. We lived in fear every time it rained. The house could be swept down at any moment. The kids had to skip school. Now we are happy. If the project people teach us how to develop tourism to earn our living, then we have no more worries.â€™

In the afternoon, we took a walk around the village and the neighbouring Do Village to ask about the festivities and customs of this people. The Chut people in Ta Vong still keep some of their traditional festivals. The rain had stopped. The clouds slid slowly between the dwellings, making the whole scene drift and bob somewhat. Darkness fell quickly, pulling with it the dim light of the month-end moon, just enough to make us feel the vastness of space. Cool breezes passed through our hair, swaying the light of the candles that we brought. Our conversation also swayed till after midnight, while the whole of Ta Vong was deep asleep in the lullaby of the mountains and the song of nocturnal birds.
The next morning, I woke up in the sound of pá»“i pounding. The sound came from all 25 houses of the village, like a symphony orchestra. Pá»“i, a mixture of corn, rice and cassava, is the main dish in the villagersâ€™ meals. The women woke up very early to make pá»“i for their familyâ€™s breakfast. Every kid had a piece of pá»“i while walking downhill to school.
After breakfast, we went to contemplate the beautiful views along the Ta Leng spring. Cascades of small waterfalls, pebble beaches and graceful turns made the spring look so romantic and attractive. Lining the spring, stripes of grass and bushes of cornflowers, tormentose myrtles and other wild flowers that I donâ€™t know the names of woke up under the morning sun, full of life. Dew drops sparkled on the leaves, and wooden bells rang with every step the buffalos made. We went uphill, and the village was reduced to neatly arranged toy houses.