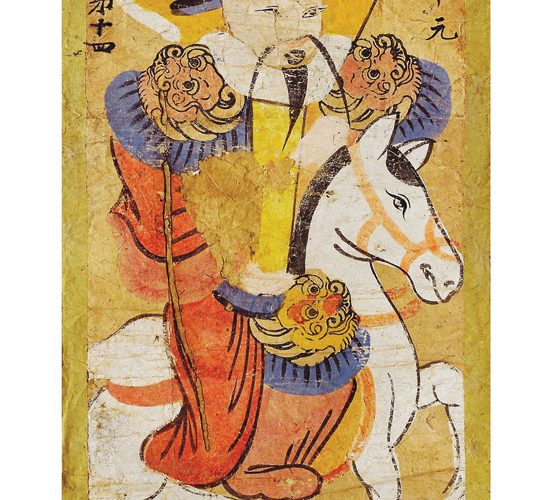 A religous painting of San Diu people, from the
collection of Pham Duc Sy.

A religous painting of Dao people, from the collection of Pham Duc Sy.
Photos provided by Nguyen Anh Tuan

The Vietnamese call this year (starting from 31 Jan, 2014) the year of the horse. In Vietnamese folklore, the horse is mentioned very frequently. Examples:
1. ‘No good horse without defects’, meaning talented people often have bad habits.
2. ‘Young horses kick’, meaning young people often are reckless, thoughtless.
3. ‘Horses go the known way’, meaning it’s not easy to abandon bad old habits.
4. ‘Horses and carriages flow like water’, meaning people in their best appearance rush in one direction (such as on a festive day)
5. ‘Horse seeks horse, goat seeks goat’, meaning that people with something in common make stronger connections.
6. ‘One horse gets sick, the grass in the whole stable is untouched’, meaning solidarity.
8. ‘As straight as horse guts’, meaning to describe a person who talks bluntly, without choosing words.
8. ‘Wrapped in horse hide’, meaning death on battlefield.
9. ‘Buffalo head, horse face’, meaning to describe rogue bullies.
10. ‘Lone spear, lone horse’, meaning a lone person facing opposition, troubles, and difficulties.
11. ‘Up a carriage, down a horse,’ meaning a wealthy person (who never has to walk).
12. ‘Four horses can’t retract a spoken word’ meaning a word thoughtlessly spoken can’t be absolved.
13. ‘Like the frontier man who’s lost his horse’, meaning there is good luck in bad luck. As the story goes, when a man has lost his horse, he thought it was a bad luck. But then the horse came back with a mare, so it turned out to be good luck. Then his son fell from the horse, bad luck. But being crippled, his son was not enlisted in the war, so good luck again.
­­­­­­