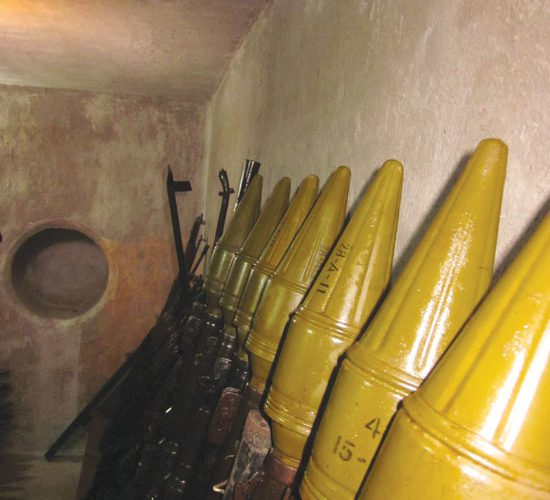 Located at 287/70 Nguyen Dinh Chieu St, Dist 3, Ho Chi Minh City, a simple house has interested many visitors because it features over two tons of weapons used in the American War.
In a book at the house, a tourist wrote that ‘Having seen this house and the bravery of these special people, we can not imagine what they went through. We should all remember this war and appreciate the hurt that war causes.’ Another wrote, ‘Thank you so much for letting us view the secret house. That was so fascinating to see the ingenious methods used to fight the enemy.’ Another wrote, ‘Very interesting visit, amazing what you can do in a small place.’
To prepare for ‘The Tet Offensive 1968’, Viet Cong forces transported weapons and food to bunkers of the households.
In early 1967, Tran Van Lai, a member of Saigon Special Force, obeyed the command to buy the house to make room for weapons supporting the attack on the Independence Palace. The house is 14.9m in length and 2.5m in width with two secret bunkers. One is underground and is 8m in length, 2m in width and 2.5m in height. On the wall, there are 4 small round exits leading outside. The lid of the bunker includes 6 pieces of bricks and has room for just one person going down.
Soil produced by digging the bunkers was put in small rubbish bags and dumped in areas outside Saigon in the evenings. Weapons were hidden in wood coffins, fruit baskets and bamboo rolls carefully transported to the bunkers from Cu Chi, 60 km away from Saigon. Mr Van Lai worked on the bunkers that were so secret that his neighbours did not suspect their existence.
Until 1968, the bunkers concealed two tons of ammunition. ‘The Tet Offensive 1968’ was approaching.
However the mission was uncompleted. Most of 17 soldiers attacking the Independence Palace on the night of the first day of the first month were killed. Tran Van Lai and the remainder were arrested. The enemy found the house and shot at it to find Viet Cong. However, they never knew about the bunkers.
In 1988, it was recognized as Historical Cultural Vestiges of National Level by the Ministry of Culture.
Many mementos of the soldiers are on display in the house. Many holes caused by guns by American soldiers and the Republic of Vietnam are still in the door.n

The lid of the bunker

A view from below the bunker

Weapons hidden in the bottom of fruit baske

According to declassified CIA Documents on the Vietnam War, featured on www.americal4ofthe3.com, ‘The Tet Offensive was a military campaign conducted between 30 January and 23 September 1968, by forces of the Viet Cong, or National Front for the Liberation of South Vietnam, and the North Vietnamese army, or People’s Army of Vietnam, against the forces of the Republic of Vietnam, (South Vietnam), the United States and their allies during the Vietnam War. The purpose of the offensive was to strike military and civilian command and control centres throughout South Vietnam and to spark a general uprising among the population that would then topple the Saigon, government, thus ending the war in a single blow. The Viet Cong launched a major offensive beginning with a wave of attacks began on the morning of 30 January. This early attack did not, however, cause undue alarm or lead to widespread allied defensive measures. When the main communist operation began the next morning, the offensive was countrywide in scope and well coordinated, with more than 80,000 Viet Cong troops striking more than 100 towns and cities, including 36 of 44 provincial capitals, five of the six autonomous cities, 72 of 245 district towns, and the national capital. The offensive was the largest military operation yet conducted by either side up to that point in the war. The initial Viet Cong attacks stunned allied forces and took them by surprise, but most were quickly contained and beaten back, inflicting massive casualties on the communists. Although the offensive was a military disaster for Viet Cong forces, it had a profound effect on the American administration and shocked the American public, which had been led to believe by its political and military leaders that the communists were, due to previous defeats, incapable of launching such a massive effort. Except at Hue and mopping-up operations in and around Saigon, the first surge of the offensive was over by the second week of February. The U.S. estimated that during the first phase (30 January – 8 April, 1968) approximately 45,000 communist soldiers were killed and an unknown number were wounded.’

Text and photos by Tu Anh