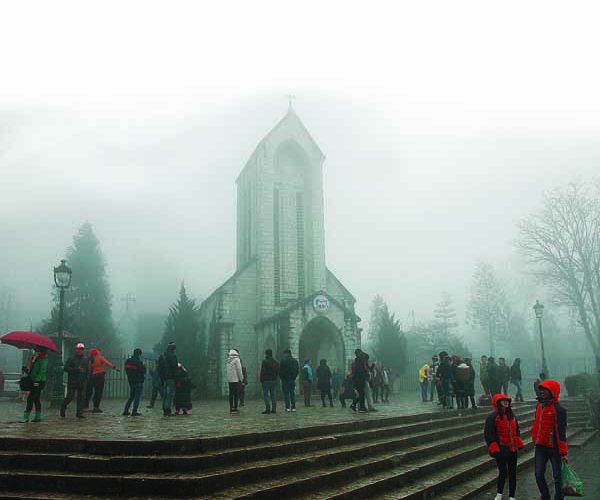 HOUSE OF WORSHIP HOUSE OF LOVE

Outside and inside the church. Photos: Nguyen Thien Hung

Sapa stone church, built in the early 20th Century, is considered one of the best-preserved French architectural ‘footprints’ left in the vast northern highland region. Every weekend, people of ethnic minorities in their garish garments come here to pray, sing, dance and play their traditional musical instruments.
The Website of the People’s Committee of Sapa District says, ‘In 1918, the French constructed the first villas in Sapa, giving birth to a resort town to serve the governing body in Hanoi. During the 1924-1940 period, they built a church and about 100 villas in the town, 1,500m above sea level. During that same period, they constructed water and electricity hook-ups, street lighting and drainage systems and a post office. In the late 1930s, during summers, Sapa received thousands of Europeans who came to Vietnam to live and work.’
As an important part of any French town, the church was built at Sapa’s very center, on a level clearing. It can be seen from any point in the town. After its completion, the church had the shape of a cross and was named Church of Virgin Mary of Man Coi.
Built on an area of 500m2 in Roman Gothic style, the Church of Virgin Mary of Man Coi, with its roofs, steeple and cupola all having a sharp top, looks light and elegant. The 20m high steeple houses a 500kg bell, cast in 1932.
Inside the church, the most noteworthy interior element is the dozen glass window panels along its side walls with colorful scenes of Jesus Christ’s life painted on them.
Beside the main structure, the 6,000m2 premises also has a living quarter, a house to raise domestic animals, an Angels’ House, a front court, a Saints’ garden and fences all built from chiseled stones. So, the Church of Virgin Mary of Man Coi is also referred to as the stone church.
According to the Website of Sapa parish, from the time it was first opened, the church always had a French pastor. Since 1948, after father Ydiart Alhor Jean was killed, the church was abandoned because of war.
In March of 1952, French airplanes bombed and leveled Sapa almost completely. But for some mysterious reason, the stone church remained intact. Being without attendance and care for decades, Sapa stone church has suffered a lot of damage.
In 1995, the church was substantially renovated but the original architecture was kept intact. Since then, more and more local ethnic parishioners attend the functions. The preaching, however, is conducted by nonlocal pastors. According to the Website of Sapa parish, ‘Since May 2006, Sapa stone church officially began to again have a permanent parish pastor after almost 60 years.’
At present, ethnic minority people from surrounding areas dress up every day and come to the church court to trade their goods. Weekends, especially Saturday evenings, are also the time minority artists gather here to stir up the fun mood by showing their songs and dances, playing flutes, pipes, and leaf and lip music. Tourists lovingly call these activities ‘love kermis’. Perhaps they do feel that cultures are melting, mixing, and connecting locals and visitors.
Remarkably, on Christmas Eve night, the colors and good mood at Sapa stone church multiply. Ethnic people from faraway places pour in to attend the major function, and at the same time to enjoy the vibrant show of oneness and togetherness.