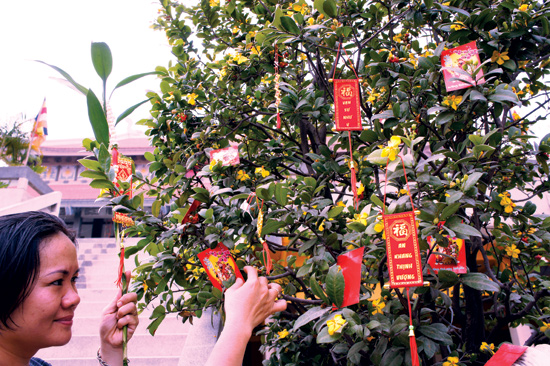 How to pick the lucky sprig

Vietnam Heritage, February 2011 — Following annual routine, I got dressed neatly, carried out the prayer and first well-wishing rituals, in the vigil of transition to the New Year, then rode my motorbike into the street, taking the direction the wealth god had indicated, to pick the lucky sprig.
My grandmother said that during the vigil we were not allowed to be sleepy. We had to do something that would bring well-being. Good examples should be set, to be followed throughout the year. My grandfather said the head of the household had to leave his domain to pick the lucky sprig.
Years ago, when I was living in the countryside, after the vigil I used to take a walk in search of the lucky sprig, but experience has shown me it is more convenient to ride a motorbike, and make the trip a New Year’s outing. A motorbike brings the pleasure of moving fast, creating an example of continuous and positive progress for the new year.
My neighbour and friend waits until late in the morning before he goes for a walk and picks the lucky sprig. There is nothing wrong in this. It is the quality of the sprig that matters.
The sprig can be from any kind of plant, and with or without flowers, with or without fruit, but it must be green, exuberant, with leaves growing densely, symbolising wealth of the sky and earth. It goes in a vase on the first day of the year.
So, I was on my motorbike, and under the light of the street lamps. People separately or in groups, neatly dressed, walked slowly and talked noisily. The street seemed new and unfamiliar, composed and leisurely. The people seemed to be new. They looked kind-hearted, compassionate and nice. I turned so as have travelled in all four main directions and eight supplementary directions. The city of Tuy Hoa, in Central Vietnam, though small, was big enough for me to make such a New Year’s outing. I saw very pretty foliage but I didn’t know its name. The leaves looked dark. They were thin and sharp, boldly directed forward. I stopped. An old man was picking a young sprig from the tree.
I went up to him, raised my hand and greeted him with ‘Happy New Year’. He said, ‘Happy New Year’, and asked, ‘Which hand do you use to pick the sprig?’ I was puzzled.  I didn’t have any idea which hand I used to pick the sprig. I asked him confusedly, ‘Sir, which hand do we need to use to pick the lucky sprig? I have never noticed how to do this.’ The old man smiled and said, ‘You should pick the lucky twig with your left hand. That is your destiny’s hand. That is what the chiromancer says. Your left hand is your destiny’s hand. A male’s destiny stays in his left hand, a female’s destiny stays in her right hand.’ Oh, I understand. No wonder. I said thank you to the old man and went closer to the tree. On tiptoe, I moved my left hand to pick a sprig within my reach, a big one, its leaves light green and wet with dew, invigorating.
From a distance, I looked at my house bright with electric lights. Every door and window was wide open, the house sparsely peopled, with children in the living room.
I put the sprig in the vase together with a bunch of tricolor gladioli on the ancestral altar.
­­