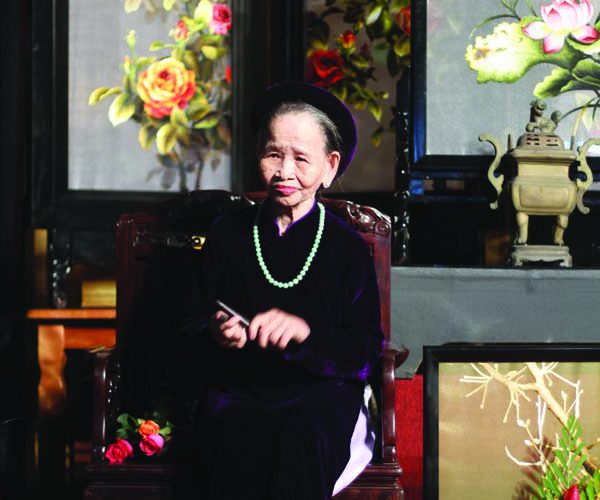 Minh Man, a live treasure of ca Hue, a type of traditional music that is as significant as ca tru in the north and don ca tai tu in the south, gave her last breath at her home in central Hue City in March, at 93. Man’s passing was a loss to the art form as she was considered by many to be one of the best-ever vocalists of ca Hue singing as well as a prominent educator in the art, thanks to her profound knowledge in the field.
She was born Nguyen Thi Man in 1925 in an outlying village near Hue, the former imperial capital city. At 13, Man became a vendor and got chance to sing ca Hue. The singing community discovered her acute sense of rhythm and excellent vocals. At that age, she could sing the toughest rhythms that normally required a lot of practice. At that time, singers were looked down upon, due to the reputation of some of them being prostitutes. Man thus had a hard time pursuing her singing passion as she fought to gain trust from her father and reserve time for making a living as a vendor.
Fortunately, she rose to fame two years later as one of the best vocalists of the singing style and was selected to perform for the country’s last king, Bao Dai, several times. War and poverty put a hold on the singing form for decades and when it found a path back, the veteran artists, including Man, became significant once again. They not only played the key role in reminding audience of the heyday of ca Hue, but also trained the next generation in the art form.
Over 70 years, Man collected experience and skills that were second to none.
In recent decades, Man continued performing as well as conducting training and acting as a consultant for studies and documentaries on ca Hue. In 2016, she was awarded the title of ‘Outstanding Artist’ by the State President.
‘Man’s passing was a loss to the singing form and we are sorrowful for losing the chance to listen to her voice as well as her wisdom,’ said poet Vo Que, who chairs a club for ca Hue in the city. Que added that many trainees loved working with Man, thanks to her knowledge and devotion.
Ca Hue, an archaic form of music, took root in the Central region of Vietnam for about 500 years. It represents Hue in particular and the region in general. Experts place it as high as other Vietnamese traditional music forms like don ca tai tu (Southern folk music) and ca tru (ceremonial singing) found in the northern region.
Some said to be a variation of nha nhac (Hue royal court music). This music is typically performed with traditional Vietnamese musical instruments, some of which are used in performances of Hue royal court music, including the dan tranh (16-string zither), dan nhi (two-string fiddle), dan nguyet (moon-shaped lute), and sanh tien (wooden clappers).
Originally, ca Hue had a total of 60 basic tunes. It sets to tune some Hue folk songs composed by scholars, mandarins and royal family members. During imperial times, members of the royal family as well as mandarins were looking for a more common form of the court music and they created a form of regular entertainment by setting stages for performances for this kind of music in their homes as an exquisite hobby.
The music gained popularity thanks to the mixing of different classes in an imperial setting, with its lyrics containing Hue folk songs while others were composed by the era’s intellectuals. One interesting feature of the music is it uses both instruments popular in the royal court music but also daily items like teacups. The unique inclusion of teacups in the instrument line-up was a charming addition that delighted many.
Performers of ca Hue were always dressed in ao dai (Vietnamese traditional dress). The poet Que insisted that visitors to Hue should be entertained with Ca Hue for deeper understanding of the souls of local people. Experts said that the song lyrics were basically developed on the local dialects, which could be found in daily conversations.
Today, the music performances are a part of visits to the former capital city and the performances can be found on home stages and floating boats on the famed Huong (Perfume) River at night. The music was listed as an item of national intangible heritage in 2015 and the musicians and researchers are working on the UNESCO profiling process, seeking a world heritage status for it.
There are around 500 licensed performers of the music in the city, many of whom perform nightly. Poet Que and his club offer free show of ca Hue at every Tuesday evening in Hue Museum of Culture in 25 Le Loi Street, Hue.