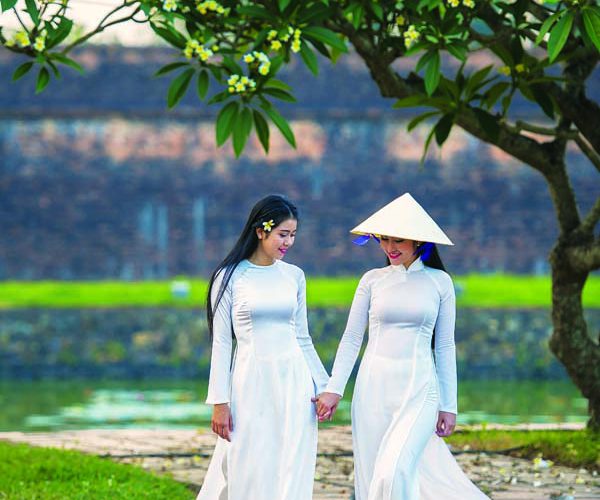 Hue was the birthplace of ao dai, the Vietnamese national costume. A long time ago, when Western culture had not yet interfered with local dressing tradition, everyone in this former imperial capital city could be found dressed in ao dai at all times.
Today, Hue wants that glory back as a means to maintain the typical local culture, honor ancestors who created the elegant costume, and make the city more attractive to visitors.
In 1557, the Nguyen Lords settled Thuan Hoa and ruled the southern part of Vietnamese territory as single nation. The political separation produced the need for cultural differentiation, including costume.
The first lord who came up with costume separation was Vo Vuong Nguyen Phuc Khoat, according to researcher Nguyen Xuan Hoa. The lord ordered the creation of a type of dress that could be differentiated from those in the north, marking the birth of ao dai.
“By 1774, the costume was popular in Thuan, Quang and Dong Nai, (which today are Hue, the southern Central region, and the eastern South region of Vietnam respectively).
Researcher Hoa said King Gia Long requested the synchronization of one type of dress for people all over the country. However, he was sympathetic the sudden change and allowed time for northern residents to get familiar with the southern dwellers’ costume.
During his reign, the king did not have chance to see ao dai’s popularity in the country. His son, Minh Mang, continued the integration. But later, he made an order for the synchronisation in Quang Binh, and then throughout the northern region by 1837. Ao dai became the national dress of Vietnamese people.

National culture legacy
Women born in the 1940s, 1950s, and 1960s consider wearing ao dai a must during Tet holiday  for their participation at a wedding party, during their visits to funerals or any other special occasions. They have sets of ao dai in different colours and styles for the manner of the events.
Men do not wear the costume as often as the women.Colours of ao dai change according to their ages. The middle-aged men wear black, men from 70 to 89 years old wear blue, and those 90 and more wear red.
According to researcher Tran Dinh Hang, ao dai is for decency and courteousy. “To Vietnamese, the time with a set of ao dai covering their bodies is the time that they could do something immoral,” he said.
That means wearing an ao dai is wearing respect. Researcher Hoa explained that structure of ao dai at its first design meant courteousy and the respect.
“Originally ao dai had four main laps and one smaller lap covering the chest. Each also had five buttons,” Hoa said. “The main laps represented the four persons of parents, including the blood and the in-laws, mothers and fathers, and the smaller one stood for the wearer.”
“The five buttons were the reminders of the relations with king, father, spouse, siblings and friends. They also described the five morals necesaary to be a good person according to Confucian norms.

Comeback in glory
Local governments have worked to encourage locals and school girls to wear the ao dai more often. It also involves researchers in brainstorming plans that could bring back to the birthplace of ao dai the glory of this charming type of dress.
Throughout almost 200 years across the country, ao dai at its birthplace has retained its own features. “Hue’s ao dai has its own features and it has a typical identity,” said researcher Hoa.
According to researcher Hang, Hue’s ao dai differentiate from other styles of this costume presented in other regions of the country in the features of colour, material, iconic signature, ambiance, and style.
Today, many visitors manage to have an ao dai sewn in Hue during their trips here. Local government and Hue researchers want to build up Hue as a centre of ao dai production.
Researcher Hoa came up with the idea to increase the popularity of the costume in the city. “Festivals honouring Hue’s ao dai and events to show gratefulness to Vo Vuong Nguyen Phuc Khoat and King Khai Dinh will help lure attention to the costume,” Hoa said.
Researcher Hang said the city of Hue needs to have a centre designated for ao dai. At the centre, visitors view the sets of old as well as royal style ao dai. People who want to have deeper knowledge on the national costume could  sit down for study and those desire to buy one set; the centre would be able to supply them with products.
“But the key is to gather the top skilled tailors of ao dai for the service of quick sewing to meet swift demand of visitors who do not stay long in the city,” said researcher Hang. The local government is studying to open stalls for exhibition and trading of ao dai in the local airport in an attempt to get visitors familiar with the costume during their arrival and departure.
Despite ao dai and conical hat being a national legacy, many people still look at Hue as the centre of the costume. Many poets and photographers take trips to this city to enjoy the beautyof ao dai and conical hats worn by school girls. Hue is expecting to preserve that kind of beauty and make it a cultural signature of this poetic city.