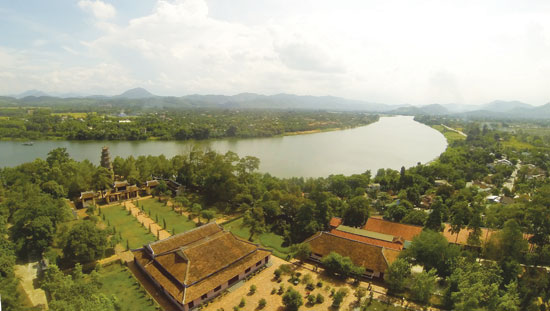 There are many ways to approach and experience Hue, but you will surely be surprised and stunned at the panoramic view of Hue from high in the air. The last monarchic capital of Vietnam is uniquely elegant and meritorious as a world cultural heritage.
The people in eras gone by must have seen a vision of the nature when they chose this middle valley of the Perfume River to build a wonderful capital. Looking from above, one feels that the river and the city were destined for one another. The city makes the river a poet that sings love songs to the graceful streets and solemn royal structures.
Looking from the upper reaches of the Perfume River, behind the colossal Truong Son Mountains, the royal tombs of Nguyen Kings are half-hidden in the lush greenery by the sides of riverâ€™s silk. Gia Long Tomb, simple and grandiose, is surrounded by 36 hills. Few know that with its over 2800 ha original plan, this is one of the largest imperial tombs in the world. On the fork of Perfume River where its left and right tributaries meet, Minh Mang Tomb is a masterpiece of harmonic and impressive architecture. Thieu Tri Tomb is idyllic with lakes, pine groves, villages and paddies. On the other side of the Panorama View Hill, Tu Duc, Dong Khanh and Kien Thai Vuong Tombs look like gardens from fairy tales. Touching the river, the Hon Chen Palace, Temple of Letter and Thien Mu Pagoda are culmination points of sophistication in landscape accenting and design.
From the Bang Lang fork down to the sea, the river flow becomes slow and soft, curving around villages, fruit gardens, between moss-covered temples and castle walls and a vibrant modern urban setting. The Royal castle stands right on the waterâ€™s edge, surrounded by flowing water, thus making â€œfour tides kowtow,â€ with the martial axis going straight through the center of the Royal Citadel to the Magic Estrade, Letter Exhibition Tower, the Breeze Exposure Pier and Ngu Binh Hill on the south bank. Worn for over 200 years of rough weather and history, the walls designed to stand for eternity, the gold plated and lacquered palaces, and the solemn temples and pagodas have remained almost intact. Along the streets, modern-looking dwellings mingle with residences of old noble families. They are miniature museums of traditional architecture and aesthetics, where the unique typical Hue lifestyle is vehemently preserved.
Only from above one can see the whole harmonic picture of the old capital. The wild mountains and forests in the West melt through the tombs, temples and pagodas into the Royal citadel in the East, at the center of the valley, where water flows meet and thriving energy runs high. In Vietnam, Hue is the only old capital planned in such a harmony of Ying and Yang. It is meant to be the land where both the living prosper and the spirits saturated, with the Perfume River connecting the two worlds.
Only seeing Hue from high above one can realize that the people of the old were looking seaward. The distance from the capital to Thuan An estuary is just 10 km along the widening Perfume River. The 60 km long, 1-4 km wide Tam Giang lagoon is like a blue shawl lining the vast East Sea. This is where some rivers stop and accumulate energy before pouring into a new cycle of life. Thuan An and Tu Hien estuaries are the gateways from the countryâ€™s capital to the big waterways, connecting it to international ports Hoi An and Da Nang. These names have also been attached to many major historical events of the nation through hundreds of years. It was in the times when Hue was the countryâ€™s capital that Vietnam had definitely affirmed sovereignty over Truong Sa and Hoang Sa archipelagos and a multitude of other islands along the shore from the Gulf of Tonkin to the Gulf of Thailand.
Only having seen Hue from high above one can understand completely the sung words â€œHueâ€™s beauty can be found nowhere else…â€
Dr Phan Thanh Hai is the Director of Hue
Monuments Conservation Centre.