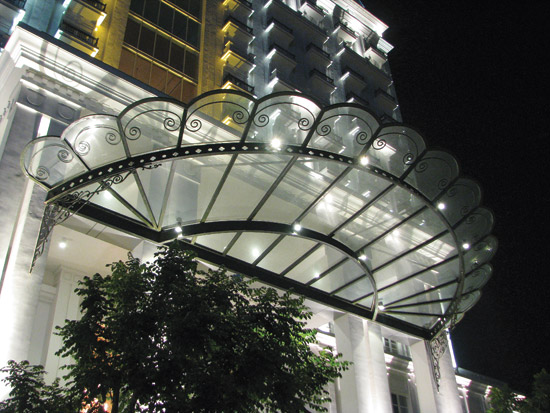 Indochine Palace: a match for the imperial capital

In Hue, in 2010, I could smell the flowers and the still-living water of the Perfume River, and in the Celadon Palace hotel, in Hue, which is now the Indochine Palace, part of the Best Western chain, I could smell the wool of the carpets in the suite and the leather of armchairs in spots such as the Au Rendezvous lounge. This leather was â€˜fedâ€™, as Mr Paul Stoll, who conceived of this exceptional hotel, said, and I got the sense that the armchairs would make excellent substitutes for pets in places where the maximum in animals allowed would be a ladyâ€™s lapdog. The Celadonâ€™s atmosphere had to care for probably the biggest collection of 21st-century Vietnamese arts-and-crafts furniture in existence. These extraordinarily-well executed works were protected in many instances by glass tops suspended on shirt-button-sized and -shaped points of transparent sealer, to allow the atmosphere, in the climatic sense, to reach the wood. The atmosphere, in the sense of climate, of the Celadon was not to be compared with that of Hue, or Saigon, or even that of a museum. There was nothing like the Celadon (nowadays Indochine) Palace, unless it was an enormous house. The windows in our suite could be opened if we wished, so that the still-living Hue atmosphere, not desssicated and dusty from development, could join the wool and leather, unmediated by air-conditioning, to produce an atmosphere (literally) rarely experienced since, for example, on another part of the Asian continent, the British Raj.
In our suite, table-top lamps had large, square, rich-brown, ceramic teapots for bodies. The body of the lamp on the desk was a weighty, metal elephant. The carpet was patterned with branches and flowers of a blossom tree. The carpets all through the now Indochine Palace seemed to be patterned on different kinds of trees, with both botanical and artistic precision. We could but imagine the Vietnamese-made pictures that had not yet gone up on the walls and which, like the Vietnamese furniture, would come from the same people who supplied the Park Hyatt Saigon hotel, in Ho Chi Minh City. Mr Stoll asked me if I liked the â€˜open planâ€™ of the suite. My wife had no hesitation, saying, â€˜I would like to live in a house like this.â€™ Between the bed and the bath was a gigantic pedestal with two white, bowl-style basins on it and a round, swivel mirror between them. I thought of my grandfatherâ€™s portable shaving stand, made of wood, round, with two flap-top lockers for the soap bowl and blaireau and a mirror in the middle. Either end of the bath were the toilet and shower, in translucent-glass compartments. Inside these the walls were of milky-brown limestone, polished less where it was necessary for the feet to get a grip.

Above: The front of the Indochina Palace, Hue

In the niches in the shower and bath walls and on the great pedestal stood talismans of the Indochine Palace, the celadon containers for bathing requisites, with stainless-steel, pump-operating heads. On string-of-pearl-like stainless-steel chains the bottles wore stainless-steel labels, like long, flat ingot pendants, that clinked richly. The preparations, at least some seeming to be of the hotelâ€™s own invention, included a very fine, reddish liquid soap with a piquant aroma. It was understandable that Mme was inclined to pump as if she were at an oracle or an oil well. The open plan as it applied between the desk/sitting area and the bed/bath area was controlled across the middle of the suite with an ingenious, fixed, multi-layered, lattice-like, acoustic screen and sliding acoustic screens of glass. Each side had its own large, flat television unit, and Mme would have been able to watch a Vietnamese quiz show while I watched cricket or Nineteen Eighty Four, the older version. Hue outside and the inside of the Indochine Palace suite, or open plan, were joined by both sliding, white, wooden, ceiling-to-floor panels of louvres and, closer to the glass, broad, vertically running blinds, one for each half of the suite, that admitted a rich, sunrise-coloured glow in the morning, this complementing the warmth of the browns of the decor.

â€˜Celadonâ€™ is, according to Oxford, willow green, also a glaze of a colour like that of young willow bark, and a kind of pottery with this glaze. The colour is named after a character in a 17th-century French pastoral romance, according Oxford, and Mr Stoll outlined a story, involving clothing of this colour on a blade by the name of Celadon. Vietnamese enterprises generally defer to an impersonated cultural ancestry, and the pictures at the altar in the Indochine Palaceâ€™s case would be of the last Emperor, Bao Dai, and his consort (and queen) Nam Phuong. Bao Dai was apparently a talented, stylish, occupant of the throne from 1926 to 1945, and according to a small book picked up at the Hue airport his plans for a constitutional monarchy were thwarted by the French colonial government, so that, discouraged, he devoted himself totally to hunting and sports.* Mr Stoll envisaged Queen Nam Phuong descending the lobby staircases, the balustrades of which seemed to emulate the lines of the low walls of a certain area of moats in the royal domain of Hue, or Phu Van Lau. A lot of trouble was gone to to get these lines right at the Indochine Palace. If you look level before you as you approach the ascent, you will see the result. In this also is the Indochine Palace a landmark and â€˜not just another hotelâ€™. It is an advance on the genre. These regal accoutrements do not rule out deference to modern Vietnam, and Mr Stoll was considering a prestigious place in the finished hotel for a full roll-out of the nationâ€™s modern genii.

Right: The washstand, between the bed and the bath.
Below: In a lounge at the Indochine Palace. The climate is of wool and leather

The Indochine Palace must be one of Vietnamâ€™s biggest architectural/conceptual undertakings. It looks small enough in the royal-proportioned landscape of the Perfume River, but it was enormous on our tour of it with Mr Stoll and the General Manager, Mr Matthias Wiesmann, in whose office sleek, black-to-white-toned precision was balanced with the colour and light of a Rolex-quality box shrine on the floor. The creation of the Indochine Palace has entailed extreme difficulty, but not such as to stop Mr Stoll, the former cook from Germany who fell in love and fell in love with hoteliery at the same time. His advice might be, â€˜Put forward your dream and see who wants to share in it.â€™ Those who have glimpsed the dream have been impressed by the size of the financial investment in it, which must depend on the clarity of its exposition. Vietnam Heritage has received publicity to the effect that â€˜the former Celadon Palace Hotelâ€™ has been â€˜re-branded as Best Western Premier Indochine Palace (BWP Indochine Palace) from 1 October 2011â€™. It must be nearly two years since we stayed, and I understand that the only substantial change to my description â€“ which has dealt with the physical only, as such is the importrance of the physical in this case â€“ might follow from the fact that now all the paintings are up. The â€˜open planâ€™, with celadon flasks so appealing to a modern consort, and the profoundly palatial fittings and objects, things a viewing of which is hard to put a price on, are still there. The price of a stay is exceptional value. The Indochine Palace challenges the conventional view that guests go not to a hotel but to a destination. In important respects it matches the old imperial capital and is a fair representation of it in a modern way.n

Text and pictures by James Gordon