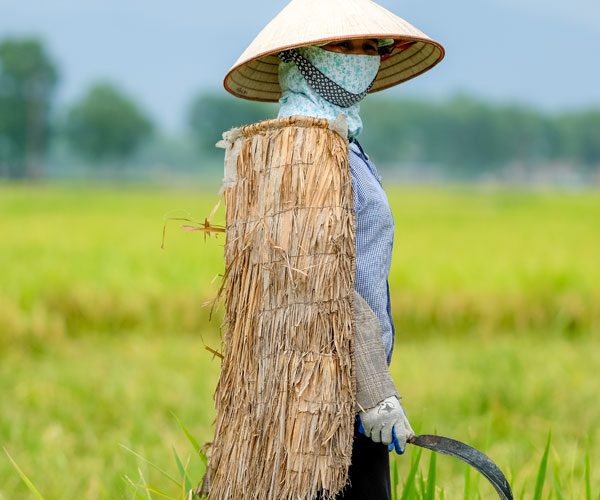 Made of palm leaves, ‘t?i’ coats have been used everywhere throughout the country. Good at shielding people from rains and scorching sun, they are also warmly mentioned in folklore.
The coat is so simple that almost everybody in the countryside can make it. A few palm leaves are splinted together into a single piece, and a few pieces ‘roofing’ on top of one another on an adjustable frame will complete a coat.
The coats ae also used by quick-witted Vietnamese for many other purposes: as a make shift tray for lunch in the fields, or as a mat for siesta under a tree, or as a scarecrow.
Being such an intimate companion in life of Vietnamese people for ages, the coats inevitably appeared in folk art and literature as a heartfelt nostalgic symbol, for example in the verses of folklore ‘My mother used to wear it in her time / It protected her from the sun, the rains and storms…’
About 40 years ago, a 7-year-old boy, I still saw many folks wear toi coats as they worked the fields, although nylon coats were already available. Once I covered myself with an old man’s t?i coat under a cold drizzling rain, and it felt so warm.
Since 2000, I have travelled a lot but have never saw anyone in a t?i coat again. I had thought improved material life made the Vietnamese abandon the old t?is.
And then I was really surprised when I read that farmers in Hanoi suburbs and Nghe An and Ha Tinh provinces still wear it as they go out to the fields. One newspaper even reported that villagers of Yen Lac village, Quang Loc Commune (Ha Tinh Provincce) and some villages of Thanh Chuong District, Nghe An Province still make t?i coats as a traditional trade.
The media says that they keep on making these coats because it protects them well from the sun, and in Ha Tinh and Nghe An the earth is scorched in summer, especially in July and August.
The folks in these provinces make the coats during the months of February to August every year. A person can make 4-7 pieces a day. A t?i coat is sold for VND30,000-VND50,000.