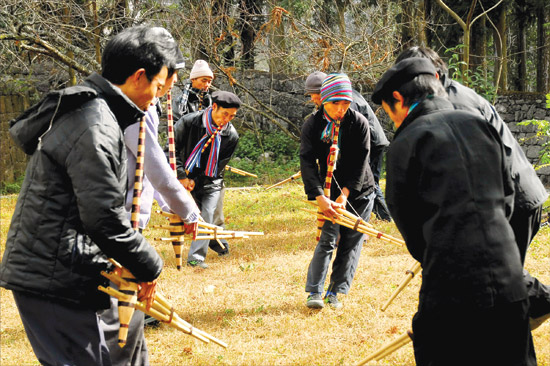 ‘Khen’ – bamboo flute of the Hmong

Once upon a time, on a mountain top, a Hmong couple had six sons; all were smart, strong and humble, and all were talented bamboo flute players. Then, the day came when their parents died. The six brothers cried in grief for nine days and nine nights until they lost their voices and had to blow bamboo tubes to make the crying sound.
Their filial devotion had moved the heavens, so the mountain god came and told them, ‘Make an air bulb with six holes and plug your tubes into it. Then only one man blows and all six tubes will cry.’ Thus the khèn appeared in this world.
Khèn accompany young men when they go to paddy fields or to festivals. They play it in all occasions and moods. It helps bring their messages to their loved ones. Their tunes, as free as the air, have kindled all the fires that brought young couples together.
Anyone who had come to a highland festival, colourful with ethnic brocades, must have heard among the noises of the trading, eating and drinking, the sound of khèn blown by groups of young men, mixed with the sound of pí lè, a kind of Hmong flute, just like the street artists in the cities.
Coming to the highlands during the lunar New Year or sài sán (mountain hike festival), or spring khèn contest, visitors from the low lands can’t help feeling dazed under the tunes that echo back and forth between mountains.
Along with the sounds that may be soft, romantic, or enthusiastic and intrepid, they also show beautiful and quirky dances.
The most delicate show is the couple dance. The man plays khèn and dances with the woman, both in traditional dress of their ethnicity. They look like a pair of pheasants in a courtship dance. With heels kicking, and bodies spinning, khèns and tunes flow in unison, couples never losing their inner connection.
It takes a lot of work to make a beautiful khèn. First, an arm-long chunk of fokienia, hsienmu, or white cedar is needed. It has to be cured to avoid deforming, which would distort the sound. Then they cut and plane it to make the blowpipe and the bulb.
Then the bulb is split, made hollow up to the rim of the blowpipe. Then the two halves are put back together and tied fast with thin soft bark, which makes the bulb airtight and decorates it at the same time.
Then they cut six thick, strong bamboo tubes of different lengths and diameters. Each tube is equipped with a brass uvula. They make a hole on each tube for the player to finger.

Next is the hardest part. The bulb is bored with a knife and the bamboo tubes are inserted so that the uvulas are inside the bulb.
And so whichever way the air flows, all the tubes make sounds at the same time, soaring high as a swan in the sky, or intimate as a creek under the forest canopy. Those tunes penetrate and pervade the Hmong flesh and blood and make it special.
Hmong khèn tunes and dances have become a must-see for visitors. But the commercialization seems highly unprofessional to some. Khèn is truly a work of art. It can also be an interesting souvenir if modified a bit so that visitors can easily carry it home.
*The article was printed on Tuoi Tre Cuoi Tuan on 6 October, 2014