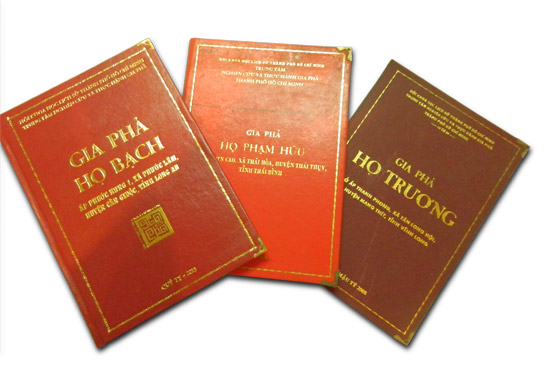 Know thy family and redeem thy soul

To inquire about one’s ancestors and seek out one’s forefathers’ is a spiritual necessity for the Vietnamese people that has been passed down for generations. When drifting in unfamiliar lands, a genealogy is like a precious object that enflames the desire to reunite with family members.
The family genealogy of the Le lineage, which was composed in the Nom (demotic) script in 1924 in Khuong Thuong Tract, An Ha Canton, Hoan Long District, Hanoi, reads in its preface, generally speaking, that households have family genealogies not only to look up this or that generation, but also to recall former people in past generations and offer instructions to the descendants of later generations.
The point of compiling a family genealogy for people in ancient times was only about a few simple things; so that descendants would clearly know their ancestors’ names and dates, their native origins, and the ramifications of their bloodline. Most genealogies have a preface that begins with the line ‘the country has its history; the family has its genealogy.’ A genealogy is the history of a family clan. Therein, a genealogy’s fundamental content is the transcription of each clan members’ name, date of birth and death, burial place, life story, marital status, children, and times when they moved residency for each successive generation.
Implicit in this transcription are influential noble families’ instructions to their descendants to uphold the families’ customs, strive to progress so as to honor previous generations, and retain longstanding traditions. Humbler families could think in simpler terms; namely so that people in their lineage would know their close and distant as well as paternal and maternal relationships, prevent descendants from giving names that coincide with those of ancestors, and avoid intermarriage.
The metropolitan graduate Bui Huy Bich wrote, ‘Scholars should amend the family genealogy once every generation.’ The ancients transcribed genealogies in the Confucian Sinitic script to be passed down from generation to generation and they set up ancestral temples. At each death anniversary ceremony, the family patriarch would take out the family genealogy and read it for the family to listen to together, so that the children and grandchildren of each branch would know each other’s progenitors. If there was a prominent person in their lineage, then it was truly a source of pride for the entire family.
Compiling a family genealogy is a natural, self-imposed task as well as the responsibility of the educated members of a family lineage. Through a genealogy, the people of previous generations entrust their inner wishes to later generations and encourage them to persevere.
The preface to the genealogy of the Vu clan in Mo Trach, Hai Duong includes the passage:
‘Our country of Dai Viet (an ancient name for Vietnam) is a kingdom of cultural merit. Among all the influential noble families, none lacks a genealogy; all the more unusual that [lacking a genealogy] would then be for a long-standing clan that has been passed down from generation to generation like the Vu family!’
One must have the conviction to emulate one’s forbearers, and whether today or in the future, succeed them in recording the succession of generations for all time in order to remember the sublime, protective benefaction of the exalted spirits, inherit the beatitude bequeathed by the ancestors, and ensure that from generation to generation scholastic laureates, dukes and marquis, ministers and generals, children and grandchildren endure eternally along with heaven and earth.
The genealogies of longstanding lineages like the Vu clan in Mo Trach or those of Pham Tu, Nguyen Bac, Dao Duy Tu and Mac Cuu have contributed many materials to the research of culture, history, and geography. The history of family lineages merges with the history of the country. The biographies of the country’s historical figures are carefully compiled in meticulous detail in the clan records and genealogies in a way that vivifies the history of the country and makes it fascinating.

The family genealogy of the Le Cong lineage. Photo: Thai A

The scholar Nguyen Hien Le was born at a time when the study of Sinology was fading. He wrote in his memoirs that his mother wanted him to continue the study of Confucian writing so that he would be able to understand the family genealogy left behind by his ancestors. Although his mother’s reason was simple, it was the impetus that compelled this Western-educated scholar to learn Sinological writing. Owing to this, he went on to accumulate many great achievements through his research and translation of Chinese philosophical classics.
Mr Nguyen Duc Du was not only someone who passionately gathered and read the records and genealogies of his family and those from his home village, but he also dedicated many decades to researching the distinguishing characteristics and methodologies of Western and Eastern genealogies, collecting and reading genealogies in the country that were thousands of years old, establishing the foundation of modern Vietnamese genealogical studies, and elevating the value of genealogies to that of a treasured heritage.
Over the last ten years, the research of genealogies following scientific methodologies has matured into programs with interdisciplinary and transnational organization such as the ‘Program for the Research of Vietnamese Family Genealogies’ proposed and presided over by the Vietnam National University in Hanoi, in collaboration with places like École française d’Extrême-Orient (EFEO), Paris Diderot University, and the University of Alberta (Canada). With funding from the EFEO, Ford Foundation, and Agence universitaire de la Francophonie (AUF), many valuable ancient genealogies were edited, translated, and published, like ?inh t?c gia ph? (Genealogy of the Dinh Clan), Danh sách t? tiên h? Lò C?m ? Mai S?n (A List of Ancestors of the Lo Cam Lineage in Mai S?n), Lê th? gia ph? (Genealogy of the Le Clan), V? t?c th? h? s? tích (The Legendary Generations of the Vu Clan), Nguy?n gia ph? ký (Genealogical Records of the Nguy?n Family), and M?c th? gia ph? (Genealogy of the Mac Clan).
In Saigon, the Centre of Genealogical Research and Practice under the city’s Association for Historical Studies, after many toilsome years, has also had many projects, the nature of which were the restoration, collection, and creation of family genealogies. In the new lands of the south, few families possess or retain genealogies. Even in the rare cases that the families do, they only briefly record the names, dates, death anniversary days, and ancestors’ burial grounds for a few generations.
The saying ‘if you see a wealthy person, then make him your relative’ is not only customary at banquets and ceremonies, but it also occasionally slips into the business of forming a genealogy. Influential, affluent people today fancy the pompous lineages that are now in vogue and readily ascribe famous ministers and generals to their ancestry. Although such deluded trifling does not harm others immediately, in the future, historical materials pose the risk of becoming confounded.
The renowned modern Chinese historian Jian Bozan, in his account of ‘my family lineage and my hometown,’ evoked a question worth pondering. Through historical documents, Mr Jian demonstrated that his family lineage was not that of the Jian family — the prestigious branch of an emperor’s descendants. His Jian surname originated in the Ha and Hala surnames, which belonged to a tribe of western Muslim Uighurs. During the Ming Dynasty, a number of people in the Hala clan were bestowed the Jian surname by the Yongle Emperor .
The recording of a family genealogy is a private affair for each clan lineage. For many reasons, people in the past considered it taboo for outsiders to see their clan’s family genealogy. Preserving the family genealogy was a sacred responsibility. Many elders relate that during the chaotic war period, when the north and south were divided, the family patriarch or the oldest son kept the family genealogy at the head of their bed or in a knapsack. In the event that they came across unforeseen circumstances, the genealogy was one of the last things with which they would bear to part.
With the family genealogy at their side, people felt spirited, as if the ancestors still watched over them and as if they were close to their native homeland.
The first page of the family genealogy of the Nguy?n clan in Hanh Thien Village, Nam Dinh Province records an antithetical couplet in the Nom (demotic) script. Let us lend it as a gift to those who live far away from their homeland and relatives:
There is the sky, the rivers and mountains — when offering ritual sacrifices in the spring and autumn, venerate thousands of years in one united prayer.
Where there are children, there are fathers and mothers — whether in strange lands or an old abode — and they remain diligent in the fields of gratitude.
*Mr Pham Hoang Quan is a history
researcher based in Ho Chi Minh City