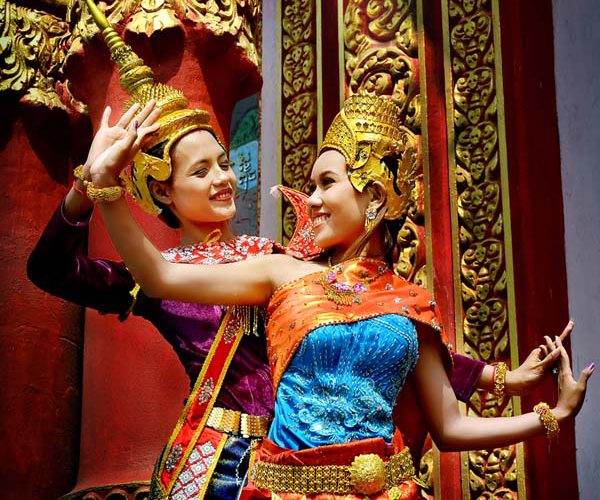 Legacy of the dance

Robam is a vessel to carry the tradition of the Khmer people from age to age. Robam, aka ‘Rom robam’ is a classical genre of stage performance that was an official form of entertainment in the Khmer royal court. Among Khmer performance art forms, robam is considered the most vibrantly flourishing. As a proprietary value, Khmer people are trying hard to preserve and develop this traditional art form.

Robam uses the language of dance to relate classical historical facts, fairy tales and legends, which exploit themes and episodes extracted from Buddhism and Hinduism, and most of all, from the epic Ramayana of India. The educational and moral philosophies of the Khmer people are wrapped in the content and form of this unique performance art. Professor Dr. Le Ngoc Canh, vice chairman of the Vietnam Dance Association remarked, ‘Discussing Khmer culture means discussing robam stage art. Robam as an art is a product of intellect, a focal point of Khmer culture. Robam stage includes artistic aspects of dance, song, make-up and dress.
Originating from the royal court, the dresses, actions and scripts of robam stage characters are typical of the nobility. Robam stage is arranged in a strictly formal and highly conventional way. Robam performances always contain two lines of characters: those representing the virtues, such as the kings, princes and princesses, who normally don’t wear masks, and those that represent evil, always masked and very diverse. Most notably of these bad characters is the ogre, called the Yeak. Robam is loved for the expressive power of the dance moves and the masks.
Each robam character performs on stage according to the rules defined for its type. Each stance and move has its own predefined fixed meaning. There are 33 moves and forms. The basic hand form can make 8 moves. The ogre dance contains 12 moves, each having its own meaning and posture. Originating from India, robam masks combine harmonically the forms and colors. Robam plays use many stereotypical masks which can be recognized at once, such as those of the Ogre (expressing cruelty), Hanuman the monkey king, the horse Manoni, the bird Korich, phoenixes, snakes etc. The robam masks become even livelier, more expressive as they are all personified.
Beside the dances and masks, the dresses on robam stage are also highly conventional. Their unique feature is that they usually include a neck piece, a chest piece, a belly piece, a back piece, leg-guards and arm-guards.
In addition to the two main lines of good and evil characters, a robam play often also features a clown that add elements of humor. The plays are accompanied by an orchestra of hand drums, stick drums, gongs and slayrom blowpipe. The drums are stimulating and stirring in fight scenes while the pipe music adds plangency to dramatic ones.
Robam used to be very popular in Mekong River delta provinces, especially Soc Trang, Tra Vinh under the patronage of the Buddhist clergy. But the popularity of this art form is in decline nonetheless. Mr Son Del from the Robam troupe of Bung Chong Basac, the only one of Soc Trang Province said, ‘Robam is passed down by our forefathers, so we just move on with it. We come to perform wherever folks demand, that’s all. Moneywise, our income and resources are very limited. We are just trying to preserve a Khmer traditional art form. If nobody invites us, we can still perform on the occasion of festivals.’