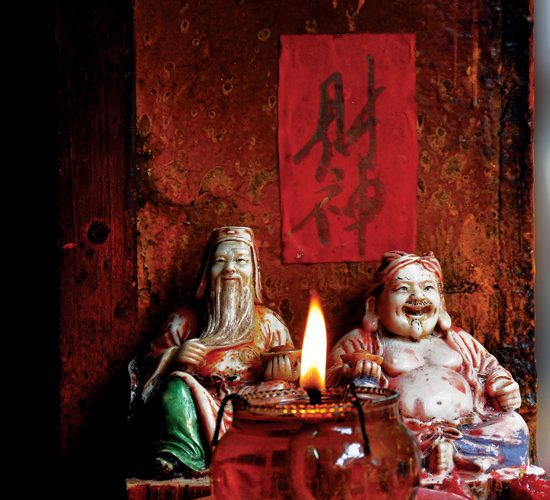 Belief in the worship of the God(s) of Wealth is one of the latest beliefs to appear, but today it is among one of the most prevalent in Vietnam. It can be seen everywhere, from community houses, Buddhist pagodas, hermitages and shrines, to individual families, especially those involved in commerce. This belief is even seen at the head of the streets, at the end of marketplaces, and the places where motorbike-taxi drivers park to receive customers.
The reason for this phenomenon is that the function of the God(s) of Wealth is to bestow riches and issue wages, as well as deliver a warm, well-fed life, lucky purchases and profitable sales, and an abundance of assets to people in a life in which the commercial economy now plays an increasingly important role.
Belief in the God(s) of Wealth is an abbreviated way of referring to the God of Wealth and the God of the Earth. Together, these two deities adorn the shrines that are set close against the ground and turned to face the main entrances of houses. Of the two Gods, the God of the Earth is the one that is an amalgamation of the three Vietnamese, Chinese, and Khmer cultures. The God of the Earth is commonly seen in the image of a ‘deity who wears short trousers, goes shoeless, and bares his chest and stomach while being decked in a Southern ‘ba ba’, or buttoned shirt, and winding the diagonally-cut headscarf of Southern peasants in ancient times[around his head].’ As for the God of Wealth, he is none other than the Righteous God of Fortune and Virtue (Phuc Duc Chanh Than), also known as the Chinese people’s ‘Lord of the Earth’ (Tho Dia Cong), whom the Vietnamese have adopted.
The God of Wealth was originally a traditional cultural characteristic of the Chinese people that appeared during the Song Dynasty and developed robustly up until the present day. Throughout the centuries, among Chinese common folk, the God of Wealth became more than just one deity, but rather an array of deities who satisfied people’s pecuniary needs. When the Chinese migrated to Vietnam, particularly to the lands of the South, they brought this belief with them and widely worshipped the god(s) in their society houses.
As for the Vietnamese, in ancient times, the concept of many gods of fortune appeared; gods who were dedicated to bestowing riches and issuing wages as well as guarding over the human sphere. The gods figured in numerous legends about ‘abiding with kindness and meeting with auspices’ (i.e. good deeds returned in due kind). However, these fortune deities never had a concrete name or image. It was only through a process of commingling and living with the Chinese and the cultural exchange between Vietnamese and Chinese communities that the Vietnamese adopted the Chinese people’s image of the Righteous Deity of Fortune and Virtue and took faith in the God(s) of Wealth as their own.
Besides this specific image of the God(s) of Wealth, the Vietnamese also adopted the votive tablets and ‘eye-opening’ sanctification rituals (in which eye dots were painted on images or statues of the deities), as well as the prescriptions and taboos for arranging the worship shrines. But the peculiar thing is that, when the belief of the God(s) of Wealth was adapted to the Vietnamese—i.e. combined with the God of the Earth—the belief then in turn influenced the Chinese people themselves at a time when they, too, came to worship the two gods side by side in homes and shops.
Today, it is quite hard to determine the precise moment when the God(s) of Wealth were worshipped in Vietnam, especially as the God(s) of Wealth were assimilated into the system of household protector deities—that is spirits who watch over families. Nevertheless, based on the few sparse source documents that still remain, researchers Huynh Ngoc Trang and Nguyen Dai Phu, in their work Than Tai: Tin nguong va tranh tuong (The God of Wealth: Beliefs, Portraits, and Statues), forwarded their assessment that the God(s) of Wealth were worshipped in Vietnam since the end of the nineteenth-century and then became prevalent close to the start of the twentieth-century—a period in which the commercial economy began to develop and commerce increasingly held an important position at a time when ‘money and gold became signs of wealth rather than ‘rice and farm land.’ It was then that ‘people needed a new image specifically responsible for issuing wealth—the God(s) of Wealth.’
Thus, although it only appeared during approximately the last 100 years, belief in the God(s) of Wealth became prevalent and increasingly tended to expand. The god(s) was/were reverently and earnestly worshipped with the hope that, owing to the deity’s (or deities’) vouchsafement, they would issue wealth and fortune. Since that time, common folks not only worshipped the God(s) of Wealth on Tet, but also all year round, particularly for families who specialized in commerce. This was because the latter believed that it was only when they considerately attended to this deity (or these deities) that the deity would guard over them. Early in the morning, people usually present offerings of coffee and cigarettes, etc. to the God of Wealth and the God of the Earth, and then light incense and pray that the God(s) of Wealth will vouchsafe crowds of customers, fortuitous and profitable commercial dealings, and harmoniousness both inside and outside (the home or shop).
During Tet, the role of the God(s) of Wealth is increasingly esteemed. People wipe the altar shrine, change the water, and offer flowers, pastries and fruit. Should the god’s (or gods’) statue be damaged, they invite a new one into their homes. People believe that in the coming year, all shall be in good order and that it is only once the God(s) of Wealth is/are cleaned that they may thrive in business.