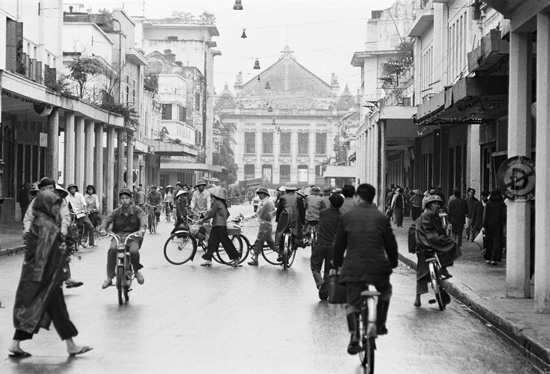 Luxurious fire escapes of those days

Vietnam Heritage, October-November 2011 — In 1899, the municipal council of the city of Hanoi held a competion to decide who would build a theatre to replace a temporary one in Takou Street (Hang Cot).
The ‘Municipal Theatre’ would be a copy of the Opera Garnier in Paris, though smaller, 2,600 square metres, one-third of the original.
The project was given to the architect Harlay, Inspector of Civil Buildings in Hanoi. The first site-investigation took place in the summer of 1900.
The judging of the competition for builders took place on 25 April 1901 and the entrepreneurs Charavy and Savelon, of Hanoi, were retained.
Built on a filled-in pond, the theatre required special care with it foundations. Thirty five thousand piles were put in before the pouring of reinforced concrete 90 centimetres thick.
Twelve million bricks were used and they came from Vietnam. The roofing slate was imported.
The scaffolding was of bamboo and 300 people worked on the site daily – without a single accident.
The theatre was renovated between 1995 and 1997 and in November welcomed the Francophone Summit, of which Jacques Chirac was president.
Ninety metres long and 30 metres wide, the theatre – now called the Hanoi Opeara House – is one of the most remarkable monuments of the city and an emblem of the international culture the city regularly evinces.
On 17 August 1945, during a demonstration by 20,000 people, the Viet Minh raised its flag for the first time at the windows of the theatre.
On 2 March 1946, in the theatre, the Constituent Assembly of the Democratic Republic of Viet Nam opened its first session.
On 7 March 1946, Ho Chi Minh and General Vo Nguyen Giap addressed close to 100,000 people in front of the theatre on the Accords of the 6th of March.
In June 1966 about 50 American prisoners were paraded in front of the theatre, before North Vietnamese cameras and a hostile crowd.
The front of the Hanoi Opera House comprised a façade, a large set of entrance steps, on each side a covered porch for vehicles, an entrance vestibule 30 metres long and 15 metres wide and one staircase departing from the centre of the vestibule for each of (a) the first galleries, (b) the orchestra’s seats, (c) seats behind the orchestra and on the main floor and (d) the second galleries. At the entrance to the vestibule was a large veranda and box office, with shelter from the weather.
Above the vestibule and on the same level as the first galleries was the foyer, with an ice (as in ice-cream) counter, small lounge and mezzamine balcony with view over Paul Bert Street, the main thoroughfare of the city.
The central part of the Opera House comprised an auditorium 25.5 metres long and 19 metres wide, including on either side an open gallery with cloakrooms and toilets and emergency stairs. These stairs could be used by notables (VIPs) outside of emergencies.
The width of the Opera House’s staircases were as follows: first galleries, 3 metres; orchestra 5 metres (2×2.5 m); behind the orchestra and main floor 3 metres (2×1.5 m); second galleries 4 metres (2×2 m); side stairs 3 metres (2×1.5 m). This made a total of 18 metres, which allowed quick evacuation of the Opera House in the case of fire.
The rear of the Opera House included a stage 17.5 metres front to back and 20 metres wide, giving an area of 350 square metres, with a height of 30 m. The scene had an opening to the audience 10 metres wide and 8.5 metres high.
Behind the stage and to the sides were the administration of the Opera House and 18 first- and second-class boxes, two boxes for choristers, male and female, a library, the Director’s office, a foyer for performers, toilets, a store for stage properties, a recess for fire extinguishers, a musical-instrument room, a guard room and guard’s post. Two steel staircases, placed symmetrically and reaching the upper terraces, served various rooms of the bulk of the staff.
In the basement, which had an average ceiling height of 5 metres, and openings to air and light from the outside, could be seen arches that supported the floor of the front of the Opera House and the middle. In the centre of the basement was a crypt serving the area behind the orchestra and the main floor of the auditorium. A corridor led to the toilets.n

* Mr Philippe Chaplain is the President of the French National Heritage League (Président de la Fédération Nationale du Patrimoine). He has written two books about Saigon and is working on another one about Hanoi. He created a website www.hanoilavie.com to publish old photos of Hanoi and is working on the same thing for Saigon. The information comes from the book Ville de Hanoi, historique, développement financier,  Gouvernement Général de l’Indochine, published in Hanoi in 1905 and printed by Taupin.

From information selected by Philippe Chaplain *