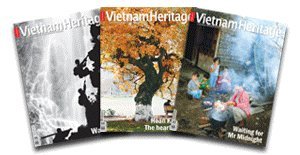 Vietnam Heritage, August-September 2011 — I went to An Phu Village, Cau Giay District, Hanoi, to find out about their traditional craft of making m?ch nha (barley sugar). The village chief’s house serves as a shop – selling tea and other things like sweets, cakes, sugar and milk. Some men were sitting around a small table, sipping hot tea. After I told them my purpose in visiting the village, they began to question me. They asked me to show them my press card and letter of introduction, and one even asked me to show them a letter of permit by the People’s Committee of the Ward. One of them asked me, ‘You came here to steal our craft?’ After I showed them all the papers I had, I was finally introduced to the village chief.  The village chief took me to the successor of the founder of An Phu village’s traditional craft. Yet even the descendant of the founder didn’t know much about it. Then, I was told to meet Mr Hai, who was considered to know the most about the history of the village. I asked a dozen more people before I finally found Mr H?i, who was living in another village.
Mr H?i was 86. He said An Phu Village had been founded in 1569, when Tran Phuc Dien, a mandarin, retired and the king gave him a large piece of land where he established An Phu Hamlet. Tran Phuc Dien’s grandson Tran Toan worked as a representative for the Vietnamese government in China for ten years. While he was there, he learned the method to make barley sugar.
The only person that still makes barley sugar in the village is Mrs Dien, who is 80. Initially, she kept saying that I wouldn’t have understood it if she had said anything about the craft, and added that the craft was being lost to the village, so there was no need to talk about it. Yet, as I insisted, she talked and talked about how exciting it was to cook the stuff that sent its lovely smell all around the village.
To make barely sugar, cooked sticky rice is mixed with warm water and infant rice plants (about 5 cm high) cut in pieces. The mixture is covered for about ten hours before it is pressed to get a liquid, which is cooked for hours until it becomes a paste. The paste sets, and that is the barley sugar. Barely sugar is used as a replacement for normal refined sugar. Mrs Dien said she still felt the emotions of winter nights when she used to put her baby to bed and leave her house to go to the cooperative workshop to make barley sugar. In those days, she said, all the confectioners had to buy barley sugar from An Phu.
Mrs Dien, when I visited, still kept a set of wooden table and frame used to press the sticky rice, and even big pots. Sometimes, she took them out and made barley sugar to comfort her nostalgic memories. Sometimes, some traditional-medicine stores gave her orders. Since La Phu Village, nearby, had begun to make a similar product, from manioc and other roots, allowing them to undercut, the craft in An Phu Village had not been as competitive and had declined.