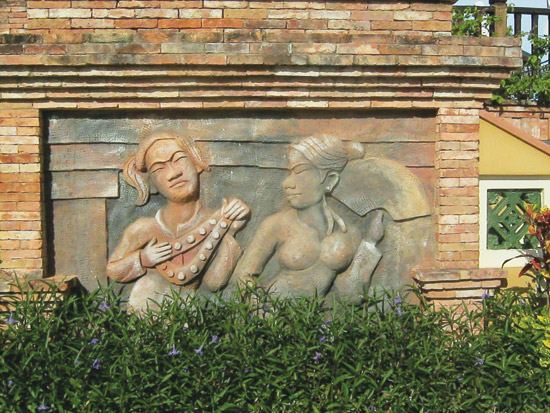 Mui Ne hotel that is posh with a capital P

Beach resorts catering to mass tourism are a relatively new phenomenon in Vietnam and I am happy to report that the mistakes that were made at such brash places as Kuta Beach, Bali or Benidorm, Spain so far have not repeated here. The main strip at that beautiful strand of sand called Mui Ne is certainly busy and at times with all the Russian signage you can easily imagine you are in the sunny Crimean, but nothing is overwhelming and the skyline is low-rise. However, if you are looking for something more secluded, recently some literally high-end places have sprung up hewn into the cliffs before you reach this â€˜main dragâ€™. Passing by a few years ago, I viewed this area as wasteland but human ingenuity is boundless. The pick of the small bunch for me has the â€˜Poshanuâ€™ which only opened its doors a few months ago.
Turning off the road into an open courtyard and reception area, the theme of the Poshanu Resort immediately becomes apparent. The building materials used are brick and terracotta. A Cham tower looms above. This is a replica of one of the Cham towers we passed by just a mile or so back. These are also called Poshanu, after a girl in a tragic Cham love story. This hotel pays homage to one of the worldâ€™s greatest civilisations that of Indianised Champa whose last bastion was the Phan Thiet area. It managed to hold out here until 1836. Also, here at the top area, there is a brick stupa type building which serves as toilets. The architecture of the villas housing the rooms in which there are friezes and pictures is also Cham influenced. Down at the swimming pool area there is a brick colonnade with friezes of Cham musicians and asparas (dancing girls).

Now, as you are led to your room, you will be taken aback by the stunning hanging gardens. I cannot compare, but Babylon surely could not have surpassed this. A carpet of wild greenery bejewelled with dandelion and marigold sweeps down the gently-sloping cliff pathway. There are flamboyant trees with their flaming red flowers in bloom in the summer months. There is red and white bougainvillea galore and swatches of white and yellow frangipani and jasmine. Then there are palms and a tree bearing purple flowers whose name I do not know. Of great economic importance to this province are also one or two dragon fruit cacti which also bear a beautiful flower called â€˜Queen of the Nightâ€™ by some. Look out too for the rice terraces with frogs that croak loudly when it rains and which are protected by a scarecrow as well as a vegetable garden.
Our spacious octagonal room was housed in one of the villas. The ceiling was raised in a tent-like structure. Here I noticed concern for safety sometimes neglected in Vietnam in that there was a smoke detector. There was a four-poster bed with netting, though we were not bothered by insects. There was also a screen with a brass Cham portrait behind which was a grey stone washing area and bathroom. The furnishings and fittings were of dark and cherry hardwood and the flooring parquet. With all the greenery outside, there was plenty of bird song. As I opened my eyes in the morning, I was even charmed by the singing and sight of a bird on an uppermost branch near the window.

In the afternoon, I stood out on the balcony to enjoy the sea view. There below was the hotelâ€™s Champa restaurant and swimming pool. Beyond was a private beach-no motorbikes streaking across the sand and no vendors- and a jutting stone jetty formed a protective arm for a small port. My thoughts took me not to the Cham but to a fishing village on the cliff-lined coast of county Dorset, England. Specifically I felt I was back in the village of Lyme Regis whose jetty was used in the film â€˜The French Lieutenantâ€™s Womanâ€™. I almost saw my favourite actress Meryl Steep standing alone at the end of the pier pining for her lover across the English Channel.
There is fine dining in an atmospheric setting at Poshanu. The restaurant itself, with its black columns, is like a traditional common house. We sat out on the terrace at night with the breeze playing in palm trees and the murmuring of waves hitting the shore. Out at sea was a long line of lights from a fishing fleet that looked like a street at night. In the night sky, the constellation of the Swan shone brightly. We had chosen a classic Vietnamese set meal for three. For a family of three, this was exceptionally good value. It was priced at VND180,000 per person with all taxes included. There were spring rolls, strips of tender pork cooked in a clay pot and packed with flavour, and a hot spicy soup featuring the delicious crab feeding cÃ¡ bá»›p (Cobia). This all came accompanied by fluffy steamed rice and sautÃ©ed morning glory in garlic. Coffee, tea and dessert came included-one of the ownerâ€™s previous businesses was Italian style ice cream and among the exotic flavours are mangosteen, durian and taro. Incidentally, when you check in, you are presented with a coupon for a complimentary scoop.
Breakfast, too, is a sumptuous affair with a wide range of choices both Vietnamese and Western. I decided to test the quality of their ingredients. When I asked to see what kind of olive oil they were using on the spaghetti, I was shown a choice brand of Spanish extra virgin. The mustard I was brought was no squeeze bottle supermarket one, but real Mc Coy French Dijon. My wife remarked on the attention to hygiene and how clean the place is.
A hotel like this can have everything you wish, but if the service is not up to scratch you may be disappointed. Not so here; the staff is extremely attentive. Not once did we carry our bags a single metre and when we were leaving, the gardening staff downed tools, leaping to assist us.
When the time did come to leave, my teenage daughter protested and asked to be glued to a hotel chair. For the next few days her talk was nothing more than â€˜I wish I was back thereâ€™. My rejuvenated wife said she no longer felt tired as she does in Saigon with all the noise and motorbikes. The luxury accommodation, the gardens, the glamour of Champa and the invigorating sea all had combined to recharge the batteries of a family of three. When I play with the word â€˜poshâ€™ in the title I refer only to luxury and not to any connotations of pompousness. The Poshanu is a friendly resort which has which has perfected the art of delivering relaxation for its guests!