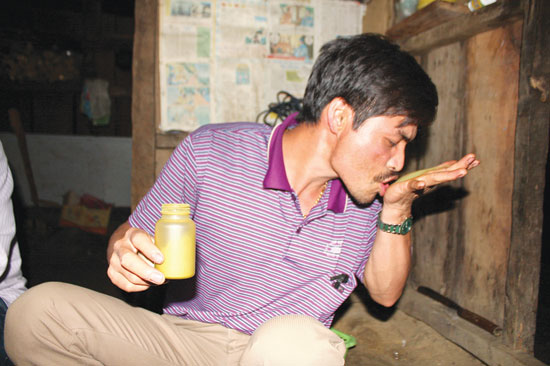 No smoke, and yet, fire

Coming to Tak Lan Village, Tra Linh Commune, we asked a grocer girl, a native of Nui Thanh District, to cook rice for us. The simple refill, just steaming rice and some fermented fish, made me feel so euphoric after a day of mountain trails.
Seeing a few village elders, we were quick to offer them some smoke. To our surprise, they all refused.
Elder Ho Van Loi, who is over 70 years of age, invited us to his house. It was tidy inside. Above the fireplace, beside rice and corn, we saw a lot of tobacco leaves hanging to dry. I thought to myself, ‘elder Loi must be an addict,’ and offered him a cigarette to begin a conversation. He refused, ‘I don’t smoke. We villagers aren’t used to smoking. It makes us cough to tears. We only rinse with tobacco.’ Having said that, he took out of his pants pocket a small plastic jar, opened it and poured out a little green powder into his palm and put it into his mouth. Then he shut his mouth, saying nothing. Elder Loi’s wife said, ‘He is high with his tobacco.’ We stared at him in amazement. A few minutes later, elder Loi blew it out and his explanation began.
The green powder that elder Loi put in his mouth was indeed tobacco. The tobacco leaves harvested from the fields are left out in the sun for a day and then are hung above the family’s fireplace. Then they are ground when crispy. This powder is mixed with ground, baked snail shells, which acts like lime. The mixture is put in a little jar to keep dry and always handy.
The Xe Dang people on Ngoc Linh, at any meeting, be it at home or out in the fields, at a festive event or when moving to a new house, always offer each other Ca C’rau as a gesture of friendliness. Good tobacco should be fragrantly warming but not too hot. The sun and the fireplace smoke give it a typical aroma. The powder should not be swallowed. Inside the mouth, the tobacco is soaked. The rinser spreads the powder all over the teeth and gums. The powder then creates a sensation of heat in the mouth and dizziness in the head, stronger than that of smoking. After 5-7 minutes the powder becomes insipid and is blown out.
Ca C’rau is an ancient custom of the Xe Dang. At Tra Linh, everybody can do it, even young kids are allowed. They say that the powder keeps the teeth strong, so the
Xe Dang people rarely have toothaches.

Xe Dang women love it very much too. They rinse anytime, anywhere, just as much as the Northern women love their betel quid.
Following the locals’ instruction, I also tried Ca C`rau for an experience. As the powder spread, my teeth and gum get warmer and warmer. I shut my lips and took a deep breath, and the heat spread through the throat to my whole body. Soon I felt dizzy, hot and a strange numbness all over my body. They all laughed, ‘It’s your first time. A few more times and you will get addicted and won’t want to go home,’ one said.
According to the elders, offering Ca C’rau is the Xe Dang way to show friendship and an open heart in the mountains. It’s not bad for your health, nor does it affect other people. It is even good for your teeth.
Ho Van Hinh told me, once he took his family to Hanoi. After visiting Uncle Ho’s Mausoleum, the whole family went to Ho Chi Minh Museum. There were ‘No smoking’ signs everywhere. Walking past the exhibition items, he and his wife coolly took out the tobacco jar and enjoyed the powder. ‘The guards thought I was taking my medicines, perhaps. They had no idea that we were satisfying our addiction in a lawful way. Smoking was forbidden, not Ca C’rau.’ And of course, he later blew out the powder in a bag and threw it in a garbage bin.n

Text and pictures by Nguyen Thanh