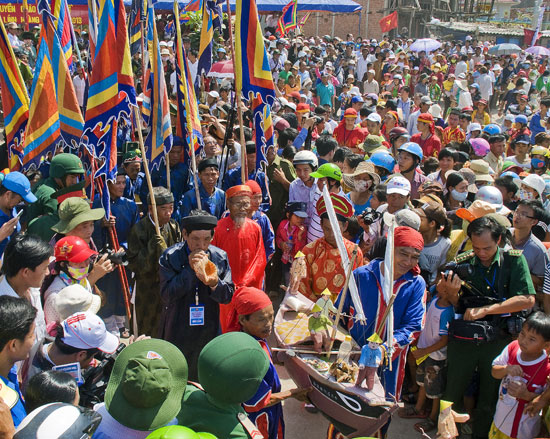 OFFERING ONE BODY TO SAVE ANOTHER

Intrepid warriors of the sea

Recognizing the importance of expanding the country’s borders and natural resources of the East Sea, especially those of the Spratly (Truong Sa) and Paracel (Hoang Sa) archipelagos, the Nguyen Lords who ruled the Middle of Vietnam in the 17th century established the Hoang Sa Marine Squad.
According to the Vietnam Tourism Authority, ‘Hoang Sa Marine Squad had 70 strong sailors from An Vinh and An Hai villages of Ly Son Island and a few others from what is today the Son Tinh and Binh Son Districts of Quang Ngai Province. The squad’s special missions were to patrol the sea and set up sovereignty steles on the islands Hoang Sa and Truong Sa, find precious products of the seas and measure the ocean’s activity patterns. Every year, the squad goes out to sea in the 2nd or 3rd month and in 8th month they come back to Eo estuary (which today is Thuan An in Thua Thien – Hue) to hand in their finds to the court’.
After a period of operation, Hoang Sa Marine Squad was reinforced and renamed to ‘Hoang Sa Navy, also in command of the North Sea’. Since its establishment, thousands of troops of the Navy fought bravely on high seas for centuries, defending our sovereignty on the islands of Hoang Sa and Truong Sa.
According to family records of old clans of Ly Son Island, countless sailors of Hoang Sa Navy went out to the sea and never came back, because their boats were too small and rudimentary to withstand the violence of the elements.
In the mid-17th century, the people of Ly Son built Am Linh Temple to worship those who perished defending the country’s offshore sovereignty. To relieve their own grief about the loved ones whose bodies were never recovered, many families built for them ‘airy graves’, with no body inside. Such graves are scattered all over the 10 km2 island.

In addition to the temple and ‘airy graves’, since time immemorial, the Ly Son people have conducted the ‘Khao Le The Linh’ sacred ritual to commemorate the perished solders and to pray for the well-being of those who are still in service.
Dr. Nguyen Dang Vu, Head of the Dept. of Culture, Sport and Tourism said, ‘khao le’ means a regular annual ritual, and ‘the linh’ means to offering one body to save another (an effigy for a soldier). Culturologists say that this ritual is one of a kind, deeply humane, and thoroughly patriotic. They also share that, in the old times, each clan on Ly Son had their own sacred, meticulously prepared ‘Khao Le The Linh’ ritual.
In the evening ofthe 19th of 2nd lunar month, descendants of the clan gather at the family’s shrine to attend the opening ceremony. The offerings include wine, betel and areca, fruits, consecration paper and incense. Instruments played include a big drum, gongs, handheld drums, blowpipes, castanets and cymbals.
After a roll of drums, the head of the clan reads an oration and offers wine, tea and incense. The descendants take turns to kowtow in front of the ancestral altar. The ceremony takes about an hour, after which the whole clan prepares for the main event.
The centerpieces of the main ritual are a bamboo replica of a boat with sails and flags and bamboo effigies wearing five-colour paper and a name tablet with the name of a missing-in-action Hoang Sa sailor. The offerings include wine, betel and areca, fish, rice, salt and roasted sticky rice.

At exactly midnight on the 20th, the time Ly Son folks consider the most sublime moment, a shaman reads funeral oration and declares the beginning of ‘Khao Le The Linh’ ritual. The head of clan and those of the branches stand still to watch the shaman while he says magic words and connects with the other world.
Having asked the deities and ancestors for their blessing, the shaman sends them the names and the souls of those who will soon join the navy. Finally, the shaman puts the effigies into the boat and signals for the young men to carry it away.
Following the boat carriers are the shaman, the head of the clan and the entire family. Thunderous drum beats accompany the procession to a preordained place. Again, the shaman reads magic words beseeching heaven in all four directions, and the soul-carrying boat is launched, meant to send Hoang Sa Marine Squad ships and their sailors’ souls to the rulers of the other world, thus dispelling the risks hovering over the real sailors. The ritual ends at predawn and the folks come home for a feast.
In recent years, the Ly Son administration and the clans of the island have agreed to have one, bigger ‘Khao Le The Linh’ ceremony for the whole population. The modern ceremony retains all ancient rituals, but also combines them with other cultural activities such as a requiem, garlands and lantern celebration, opera show, lion dance and boat race. The island’s ‘Khao Le The Linh’ ceremony takes place at the most venerable Am Linh Temple, which is in the village of An Vinh.
In April 2013, the Ministry of Culture, Sport and Tourism decreed the ‘Khao Le The Linh’ ceremony a National Intangible Cultural Heritage.
Many researchers regard the ‘Khao Le The Linh’ ceremony not only as an extraordinary expression of love and devotion toward the people and the country, but also as a proud statement of sovereignty of Vietnam over the Hoang Sa and Truong Sa archipelagos.

Vietnamese historians and many others assert that Hoang Sa and Truong Sa archipelagos are Vietnamese territories because many dynasties and modern governments of Vietnam have continually administered and affirmed sovereignty over them. But in 1974, China used force to invade and occupy Hoang Sa and subsequently a part of Truong Sa.
Hoang Sa is about 200 nautical miles from Ly Son Island of Vietnam and 230 nautical miles from Hai Nam Island of China. Truong Sa is 460 km from Khanh Hoa Province of Vietnam and 1,150 km from Hai Nam Island of China.