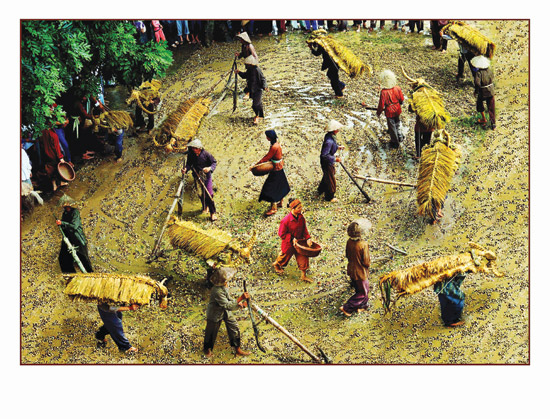 Incense offering to start the festival.

Straw buffaloes and cows and farm tools used for the festival.

A man in woman disguise plays an act of ploughing.

The straw buffalo and thatch ox show is an ancient tradition at Dai Dong Commune, Vinh Tuong District, Vinh Phuc Province, near Hanoi. Taking place at a site in the Red River delta, the tradition has been cultivated for thousands of years. Every 4th day of the lunar New Year [3 February, 2014], the two villages Bich Dai and Dong Ve organize this show to pray for a year of favourable weather, a good harvest, and healthy and multiplying cattle.
Both villages worship Dinh Thien Tich, a hero who drove out the Chinese An invaders during the reign of King Hung the 6th. Legend has it that after having vanquished the An, he took his soldiers back to the village to slaughter buffalos to celebrate. Granting the villagers’ wish for the village to ‘become more and more populous and wealthy’, the general invented a ritual in which everybody dressed in red and blue, men in female dress, women in male dress, carrying ploughs and straw buffalos and baskets of rice to throw around the fields, which then became the all-out-to-the fields festival. Bich Dai villagers built a communal house to worship Dinh Thien Tich, and the straw buffalo procession, well and alive today, became the cultural signature of the site.
During the festival, beside the straw buffalo show, there is also a show of four trades with the characters of a farmer, a scholar, a craftsman and a trader, that represent the four castes in the old Vietnamese society, together with a palanquin procession and a silkworm cocoon procession.