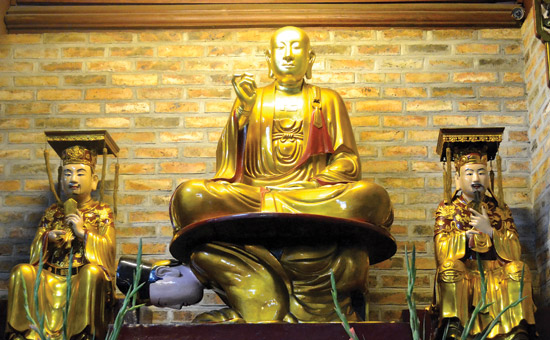 Hoe Nhai Pagoda on Hang Than St, Hanoi, is famous for its unique ‘Penitent Emperor’ statue. Venerable Thich Tam Hoan of Hoe Nhai Pagoda says that during 17th century, in late Tran Dynasty, Vietnamese Buddhism declined significantly.
Emperor Le Hy Tong issued a decree to expel all Buddhist priests to the forests. This caused the pagodas at that time to be left in desolation. The Buddhism of the country fell into dire straits. Many monks and nuns had to return to secular life.

The ‘Penitent Emperor’ statute at Hoe Nhai Pagoda, in Hanoi, 2012

In the face of this crisis, monk Tong Dien of the 2nd generation of the Vietnamese Tao Dong sect found his way to the Thang Long capital (now Hanoi) and met with Emperor Le Hy Tong in order to explain Buddhism to the emperor so that he would understand and believe.
‘The monk wrote a petition to the emperor, the content of which said that during the Tran and Ly dynasties, all the emperors esteemed Buddhism, that the nation flourished because of it, that Buddhism causes people to diminish greed, anger and delusion, and that Buddhism is like a precious jade stone for the country,’ Venerable Thich Tam Hoan recounted.
After reading the fervent petition, Emperor Le Hy Tong rescinded the former decree regarding Buddhism and invited the monk to his court so that he could preach the dharma.
Venerable Thich Tam Hoan went on to say that in order to express his repentance and reform himself, Emperor Le Hy Tong had someone make a large statue in the shape of the emperor prostrating to the ground while carrying the Buddha on his back. Hence the name The Penitent Emperor.
The red-lacquered statue was carved in the image of a king kneeling to lie with his body tight to the ground so that both hands and both feet are touching the face of the earth while a Buddha sat on the emperor’s back in meditation.
‘Many travellers from within the country and abroad come to the pagoda to revere this statue and hear its legend,’ Venerable Thich Tam Hoan said.
The most prominent aspect of the statue is that it is intended to always depict the country’s reigning leader as the penitent individual and the one who must recognize his sins and self-reflect. It is precisely this special attribute that attracts the attention of not only visitors, but also researchers.
‘This statue is intended for tens of thousands of generations, not just for reminiscing about the past like a historical relic. The emperor thought of future human hearts and believed that if he wanted to develop and inspire, then he would have to realize himself, respectfully repent, be earnest, and possess the attitude and great fortitude required in order to achieve the wisdom to transform human society,’ Mr Cung Khac Luoc, PhD of Sino-Vietnamese Studies, asserted.
According to Venerable Thich Tam Hoan, the statue is further meant to remind all people that, regardless of our stature in life, we must repair our shortcomings and bad habits before we can perfect ourselves and have more beautiful lives.

Professor Le Manh That, Phd, vice head of Vietnam Buddhist Research
Institute however says that he found no document about the crackdown on
Buddhism mentioned in the article.
‘Buddhism thrived during the Le
dynasty’, says prof That, a well-respected Buddhism historian.
Prof That adds that it’s unlikely that the statue originates from Buddhism since Buddhist tradition is to be humble and
respectable.
By Le Duc Tan

Text and photo by Bui Hien