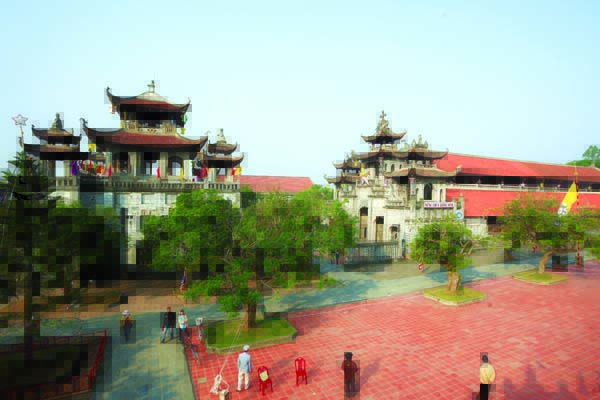 Located 28km south of Ninh Binh city, the church occupies a 117m wide, 243m long area at the center of Phat township. The complex includes many structures such as Ho pond, the Square Temple, the Great Church, Four Side Chapels, the Stone Chapel and three artificial stone caves.
Early in the 20th century, Phat Ziem was just a muddy alluvial area, overgrown with sedge. In 1828, Nguyen Cong Tru, a resourceful mandarin and a famous poet, was sent by Hue royal court to the North as the “Ground Breaking Emissary” to create new territories. He established Tien Hai district (Thai Binh) and Kim Son district (Ninh Binh), today very prosperous regions, deserving of the titles to be called the “sea of silver” and “mountain of gold”, respectively.’ Phat Ziem means “generating the beauty”..
The Phat Ziem Church complex is arranged on grounds shaped as the character “Imperial”, a very typical Oriental style with a lake at the front and a mountain at the back, which in the minds of the Eastern Asians create the sense of beauty, fertility, steadiness and lasting peace as it is “facing the water and leaning on a mountain.”
The Square Temple is the centerpiece of the Phat Ziem Church design, but was the last structure to have been completed in 1899. An architectural and artistic masterpiece, instead of thrusting into the sky with a square or round tower often seen in Western cathedrals, the Square Temple looks more like a large village temple, almost cubic. Indeed, it is 21m wide, 17m deep, and 25m high. The ground floor is the larger one. Except the two staircases leading upstairs, it looks like a triple door gate in the traditional architecture styles, built and carved intricately by hands with blue limestone. The reliefs covering the walls depict some saints, and the ones on the outer side of the ground floor walls depict Jesus Christ’s journey from the time he entered Jerusalem to the time he went to Heaven. Surrounding the walls are bamboo- shaped pillars.
The upper part of the Square Temple consists of five tower blocks. The four corner blocks, shaped like lotuses or pots of holy water often seen at the top of the temples and pagodas in Vietnamese countryside, support the statues of the Saints authoring the gospels. The central block has three storeys covered with upward hook tiles and a bell tower with a 1.90m tall bell inside. A truly harmonic combination of the Occidental and Oriental cultures indeed!
The Great Church was built in 1891 in just three months, but the preparation and the groundwork lasted a decade before that. The only thing it has in common with the churches in Europe is the large, 74m long interior.bowel inside. The rest follows the design of Buddhist temples. The spiritual elements are also largely expressed in the traditional ways. The inside of the church is divided into 10 compartments by nine sets of cross beams and girders and six rows of pillars, all sophisticatedly carved with folklore themes. The feel of western great space is created by the width (21m) and the height (15m), a proof of great skills of the masters of that time.
The roofing has two levels separated by rows of windows that provide light and create the feeling of increased height. This is the typical doubled roof in traditional architecture. The use of upward hooked roof tiles that creates the feeling of lightness is also a good blending of Southeast Asian and Gothic architectures. At one end of the Great Church, a massive granite lean-to provides fivee 5 long vault-like entrances into the church, the highest being in the middle. Inside, all wooden altars and votive utensils are red-lacquered and gilded exactly the way their counterparts are in the Vietnamese temples.
The 15.3m long, 8.5m wide and 6m high Heart of Mary Chapel, aka the Stone Chapel, was built first in 1883. Because the floor, pillars, beams, bars, tower and altars here are all made of stones, Phat Ziem parishioners call it the stone chapel. At the front, it has a tower at the center to house a statue of V?gin Mary, and a pair of five- storey towers on two sides that are reminiscent of the Pen Tower at the Lake of Returned Sword of Hanoi. Everything inside the chapel is made of elegant marble, light and flowing, with stone bars and reliefs on both sides. On the main altar are a carved and red lacquered and gilded wooden tabernacle and a stone statue of Virgin Mary. The reliefs are cut through depicting a phoenix holding a letter in its beak. The chapel is a true work of art, and some visitors dubbed it a jewel of the Phat Ziem Church complex.
It can be said that the Phat Ziem Church complex is a sophisticated and harmonic blending of Western church architecture and Eastern temple architecture. Christianity brings faith to people while the architectural style, the incense smoke and the image of the temples and pagodas, peaceful and protective, have already deeply carved in the mind of Southeast Asians in general and Vietnamese in particular. A symbol of the spiritual practice traditions of the Vietnamese people, Phat Zziem is also an attractive destination for domestic and international tourists, a focal point in the overall picture of historical relics and beautiful sceneries of Ninh Binh Province. ’

Text and Photos by Le Bich