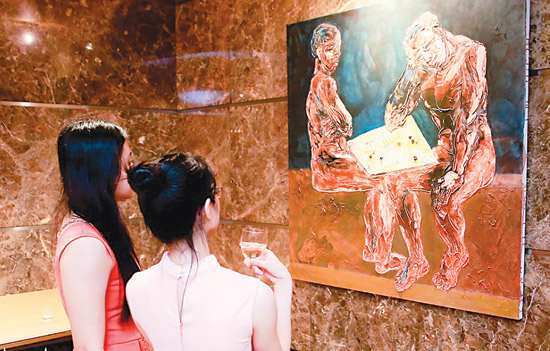 Portraiture in the raw

Some artists paint nudes. Luong Luu Bien paints nudes without their skin. Many artists make a study of anatomy, and this one certainly seems to know his deltoid from his gastrocnemius and he certainly will show you the gluteus maximus. How did I feel when seeing his pictures? Well, it was a bag of emotions: shock, fear, revulsion and fascination. They are simultaneously ugly and beautiful.

An exhibition of the anatomical works of Luong Luu Bien

Most of these pictures show people in ordinary situations. One is of two men seated by the side of a road. Another depicts two men playing a board game. Just as I was getting used to the idea that there is a can of minced beef inside all of us, I came across a picture which at first I thought was a pile of dead bodies. On closer inspection, I saw that the bodies had been arranged in the form of the intestines, clever and at the same time, macabre.
I spotted one entitled ‘Shell’ and was of an opened up oyster shell. My daughter drew my attention to a silvery shadowy figure in among the mother-of-pearl. Was the artist making a point? I remembered a line quoting Bien in the press release – ‘I am more considered with viewers’ feeling…rather than their understanding’.
Several of the paintings will show a more aesthetic, even romantic, side of Bien. My daughter was impressed by one of a head in mid- air with steaming hair and drizzling droplets of water. Bien has named it ‘Space Dust.’ Another is of a slightly contorted female figure with clothes and hair streaming in the wind next to a solid upright tree and it is entitled ‘Strong Wind’.
The picture I liked the best is called ‘Dancing’ and it has been affected in beautiful hues of brown and gold. At first sight, it may appear quite abstract, but soon among the whorls and swirls you will discern three or four dancers, one of them definitely a ballet dancer. My daughter also saw fish and even a dolphin.
The artist gets much of his vibrant effect through using lacquer on canvas. Like many Vietnamese artists I have had the pleasure of knowing, he is an expert colourist.
I had the chance to talk briefly with Bien. In contrast to the boldness of his work, he is a quiet, unassuming chap. I asked him who his favourite artists were and was quite surprised by the answer-Francis Bacon and Lucien Freud; both British artists of the last century. One can certainly see the influence of Bacon, but Bien is never going to get the same extreme reactions to his work as Bacon did in his life time.
I can certainly recommend you investing your time in seeing this exhibition. If you do not take my word for it, listen to what my daughter Anh Viet had to say on leaving the show. ‘I am so happy that Vietnam has such good art’.
‘Evolution’, an exhibition of works by artist Luong Luu Bien organised by Craig Thomas Gallery in collaboration with Softel Saigon Plaza at the Sofitel Saigon Plaza from February 2oth to April 20th, 2014, 9 a.m. to 10 p.m.
Sofitel Saigon Plaza, 17 Le Duan St, Dist.1, Ho Chi Minh City. Tel: (08) 3824-1555
Craig Thomas Gallery. Tel: 0903 888 431