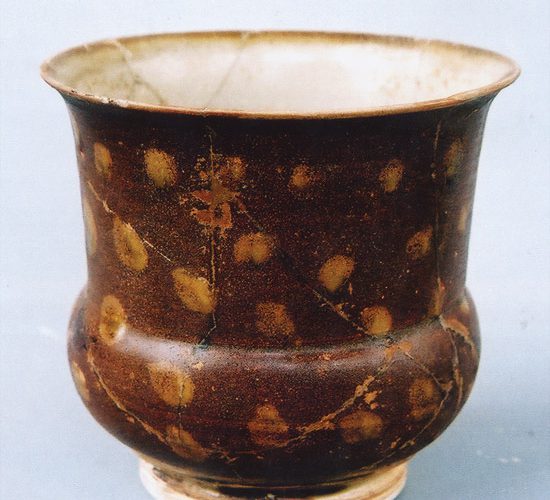 Pottery of the Vietnamese revival

Two ewers are decorated with a bird-print motif or chicken-foot decoration.
Architectural and art ceramics are a fifth category from the Ly-Tran period. Architectural and art ceramics consist of actual bricks, roof and floor tiles, ornamental roof sculptures, altar pedestals and models stupas.
Excavated sites at Lang Pagoda (Hung Yen), Chuong Son Stupa (Nam Dinh), Tuong Long Stupa (Hai Phong), Phat Tich Stupa (Bac Ninh) and especially at Thang Long’s ancient citadel, in Hanoi, have provided numerous examples.
The collection in National Museum of Vietnamese History, Hanoi, has three Ly stupa bricks. One is carved with two dragons flanking a central bodhi leaf in which there are two phoenixes. One is inscribed with the Han characters for ‘Produced in the fourth year of the Long Thuy Thai Binh reign’, equivalent to 1057. The third has three multi-storey stupas in relief.
The collection has two Tran stupa bricks. One is a fragment carved with a tiger among waves, the other is carved with a seven-storey tower surrounded by a band of circles.
Of special interest are animal sculptures including mandarin ducks and heads of dragons and phoenixes.
The mandarin duck has been found among architectural ornaments of the Dinh, Early Le, Ly and Tran Dynasties. The collection has two examples from the Ding-Early Le and Tran. This water-fowl is a splendid plumage. Either single or in pairs it is a symbol of felicity, similar to the phoenix. The mandarin duck was put on the roof ridge or the eave edge both magical (warding off evil spirits and protecting buildings from fire) and decorative purposes.
Sharing the same functions but also to symbol royalty, Buddhism or the occupant are the figures of the dragon, phoenix and bodhi leaves. The dragon especially represents a Tran military mandarin.

Most impressive are the dragon and phoenix head sculptures on the roof ridge. Their large sizes suggest the grandeur of Ly and Tran royal palaces. At that time, the dragon was a symbol of both the nation and the royalty. It was also related to the rain god.
It is possible that the phoenix head on the roof-ends of Ly and Tran buildings are also related to bird heads at the two gabled ends of a house incised on a Dong Son drum.
The collection has six square Ly or Tran floor tiles. Three Ly pieces are carved with dragons winding inside a circle, dragons inside a bodhi leaf and an eight-petal, blossoming lotus. Three Tran pieces are incised with different floral motifs.
Tran architectural ceramics share a liberal and realistic decorative style with other Tran wares.
* From 2,000 years of Vietnamese ceramics, published by National Museum of Vietnamese History, Hanoi, 2005

Above and opposite: Examples of a class of ceramics of the Ly-Tran period using a characteristic brown glaze. Photos: Nguyen Anh Tuan

Having covered, in the December 2011 edition, the millennium of Chinese domination, Vietnam Heritage continues its series on Vietnamese ceramics with the Ly and Tran Dynasties (11th – 14th centuries)