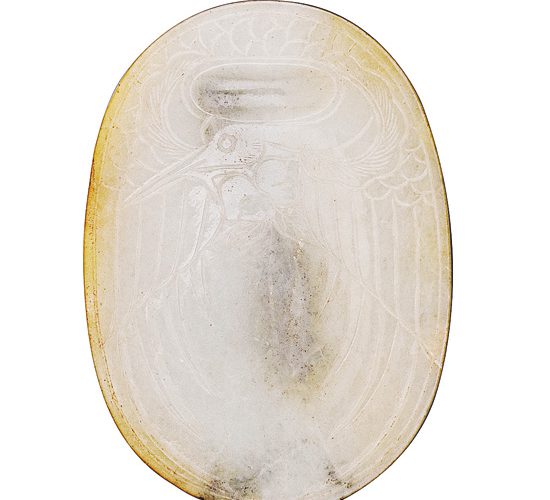 Vietnam Heritage, November-December 2011 — Vietnam Heritage has been publishing a series based on the National Museum of Vietnamese History’s on-going exhibition of jade objects and the museum’s publication Vietnamese Ancient Jade. This month the topic is jade slabs used by the Emperor and mandarins of the Nguyen dynasty to grate Chinese ink and ochre blocks.

A group of four ‘slabs’ or graters (the word ‘grinder’ has also been used) are blue-grey, white or striated blue. They are carved with ancient Chinese characters, including on the faces. One is dated Tan Suu, the first year of Thieu Tri’s reign, 1841, and is characterised as ???????, referring to a seven-line royal poem about the slab, which was for ochre blocks and owned by the Emperor.
One slab was produced in the year Binh Ngo, the 6th of Thieu Tri’s reign, 1846. It was carved with an ancient Chinese seven-lined poem, ???????, about the king’s jade slab for Chinese ink.
Both the above slabs were carved with large, four-part flower motifs and two dragons with winding bodies and heads turned and cloud.
The third and fourth slabs or graters are in the form of boxes of about the same size and colour. They were produced in the 7th year of Thieu Tri’s reign (1847). On the grating faces of both are carved two royal seven-line poems’ ??? and ???, referring to graters for Chinese ink and ochre blocks.
On the faces of graters for Chinese ink were carved a four-part flower motif and what are called ‘Buddha hand’ flower motifs. On the faces of graters for ochre blocks were carved four-part flower motifs, peach-flower motifs and four bat shapes, the latter at the corners.
These four graters provide historians with information about the poems of Emperor Thieu Tri, whom, records show, wrote ten works with about 4,000 poems and hundreds of essays.
Other graters, inscribed ????, meaning Emperor’s slab for ochre blocks, and ????, Emperor’s slab for Chinese ink, are in the form of boxes from white-blue jade and white-grey with blue striations. On their faces are carved two bats (a symbol of happiness) or two oval shapes. The dates of these items are not determined exactly, but they are believed to have been made during the Nguyen dynasty.
Still other slabs, as boxes, are of grey-blue jade and carved with dragon and water-droplet or rolling cloud motifs and two fish emerging from waves.
Two slabs, as boxes, are of white jade and decorated with ‘Buddha’s hand’ flower motifs and peach-flower and bat shapes.
There are slabs from brown or white-grey jade decorated with the themes of fish and  dragons playing with water (Ngu Long Hy Thuy).
In the same jade, there is a slab decorated with lotus leaves.
In the collection of slabs are oval ones of white jade, their faces carved with a phoenix with spread wings.