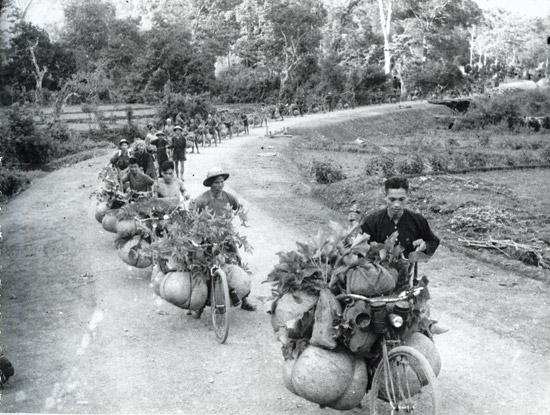 In 1954, French and Vietnamese Communists’ forces fought a decisive battle in Dien Bien Phu in the northwest for control of a small mountain outpost. The Vietnamese victory in this battle lead to French withdrawal from Vietnam, effectively ending almost a century of French rule.
Researcher Duong Xuan Dong writes about how the Vietnamese employed bicycles for logistics in the campaign.

The role of the humble bicycle in the Franco-Vietnamese conflict

During the Dien Bien Phu campaign, over 21,000 bicycles were mobilized. The bike pushers were called the ‘pack bicycle force’, operating on more than 1,500 km of forest paths. The force was organized into caravans by locality. Each caravan had many platoons of 30-40 bikes, each of which was divided into groups of about five bike pushers, so they could support each other on steep mountain passes. Each caravan had one vehicle that carried spare parts and repair tools.
A pack bicycle could carry 200-300 kg, five times more than a man. It could operate on many kinds of terrain inaccessible to motorised vehicles. Bikes didn’t consume fuel and were easier to fix and to camouflage. The groups could be small or big, and they could move in any weather.
To increase the load capacity of the bikes, the bike pushers tied a meter-long piece of bamboo, called a ‘throne’s arm’, to the handlebar, making it easier to steer. They removed the seat and attached a 50-cm bamboo tube in its place, to help keep the bicycle upright and push it ahead.
The bike pushers welded more iron and tied wood sticks to the frame to make it sturdier, and they tied old cloths and inner tubes to the tiers to help them last longer. Two bikes, ‘coupled’ together, could carry two wounded soldiers, or four, if they could sit. Bikes that had a headlight could also be used to aid surgeons as they worked in the night. The record for a bicycle load was 352 kg. It belonged to Mr Ma Van Thang (Phu Tho caravan).
Currently, the contemporary history section of the Vietnam National Museum of History, 216 Tran Quang Khai St, Hanoi, exhibits the bicycle of Mr Bui Tin from Thanh Hoa. In early 1954, like many others, he took his bicycle to join the labour forces to serve the campaign voluntarily. At first, each bike pusher could take only 80 kg of goods. They encouraged each other to take on more. Then, when the load per bicycle reached 200 kg, few could believe they could do better. But Mr Bui Tin advised them to reinforce the frame and practice driving techniques and tactics of mutual support, and he showed them how to increase the load to 213 kg.
Talking about this primitive logistic force in his book ‘The Battle of Dien Bien Phu’, French journalist Jules Roy wrote, ‘Hundreds of tons of bombs were dropped along the transportation and supply routes of the Vietnamese Army, but they failed to disrupt these bikes. General Navarre was defeated by no one but the pack-bike pushers, who carried 200 to 320 kg each, who never had enough to eat, and who slept on a piece of nylon, spread on the roadside.’

A Vietnamese soldier waves a flag atop a French post during the battle of Dien Bien Phu, May 7, 1954. Photos from the archive of Vietnam News Agency