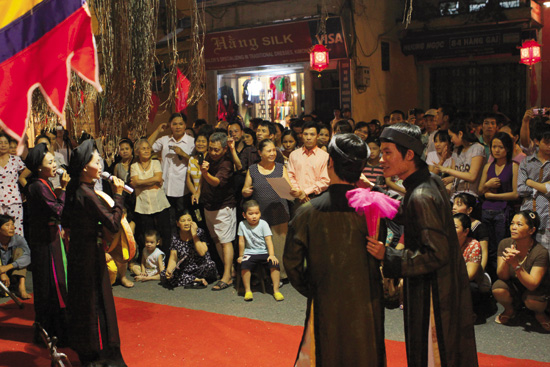 Quan ho and a fork in the road of life

Vietnam Heritage, March 2011 — In the province of Bac Ninh, in Northern Vietnam, there is a special pagoda. I will not give its name and exact location. It is one of the rare pagodas still unknown to tourism, as it has been many a century. Even incense sticks, flowers and votive paper maintained by old peasant women for pilgrims of the ten directions and usually seen in front of the gates of pagodas are not met here. The pagoda’s walls are almost entirely of earth, the encircling walls, structural ones and interior ones. The architecture has a deep source in Tantric Buddhism, the school of worship here. The pagoda is a labyrinth of corridors, compartments, courts and gardens.
With us on our visit  to the pagoda was Miss Hang (the moon) from Bac Ninh Province, a quan ho troubadour. She invited us to her home in the city town of Bac Ninh, and promised us a village chanting performance. We sat on reed mats around the singers, two elder sisters, Miss Tuyet and Miss Hang, and an elder brother, Mr Hiep, from the neighbouring province of Bac Giang.
We learnt that there were several kinds of quan ho. The first was the kind on radio or television, which was unendurable. The second was performed by established groups with proper training. It remained somewhat in the spirit but its flavour had been more or less lost. These two kinds required accompanying music. The third kind was the only true quan ho, village quan ho, always performed without instruments.
Tuyet raised her voice to song. Hang, as the younger of the two, followed. Then they sang alternately, face to face at times and at times gracefully, even erotically, eyeing each other. Their songs contained heart-to-heart confidences, relays of strength to overcome a difficult pain of separation, sharing a sensation of cohesion known only by the two of them. One became a little dominant while the other softened. I knew they had forgotten us, those two girls of today, who were also of a distant, precious age. People capable of such singing instead of crying, after four thousand years of continually fighting the enemy for existence, must have extraordinary self-assurance, morality and strength of mind.
An expert on symmetry in theoretical physics from our group asked whether there was a taboo on marriage between quan ho performers.
Tuyet gave an introduction to quan ho. Usually at the age of 12, in this rural region, people began the study of quan ho, learning from the most skilled ‘elder sisters’ and ‘elder brothers’ detail and self-mastery in every step. Then groups of ‘elder sisters’ and groups of ‘elder brothers’ were formed. Trials and explorations were carried out through song lyrics until complete understanding was reached and ties of everlasting friendship formed between members of ‘elder sister’ groups and members of ‘elder brother’ groups. It was true the people of quan ho could not marry each other. The quan ho ties were like those between people of the same blood. Sometimes quan ho performers succumbed to inclinations to become husband and wife and had to abandon their villages and any hope of ever returning to quan ho.