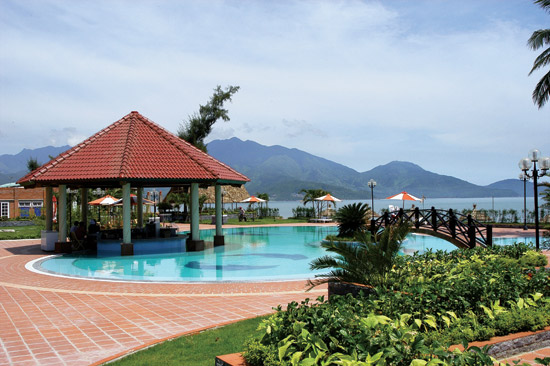 Red sky at night, red sky in the morning

There are nine million motorbikes in Saigon. There can possibly be no quicker escape from the noise, pollution and general irritation they cause than this. It is just an hour and fifteen minute flight from HCMC to Danang. Both cities have their airports jammed right against them so no long trips into town. At Danang airport I jumped into a car and was driven through comparatively empty streets and then alongside the scenic Han River spanned by new bridges. We turned left at its mouth to follow the course of beautiful Danang Bay. Right on the outskirts of town the red tile roofs of the Red Beach Hotel came into view. Mountains and sea were all around. The Hai Van Pass loomed in the heavens directly in front of me. Within half an hour of landing I found myself seated in a deck chair on the balcony of my upper floor villa room with only the trees for companions and overlooking lawns and two large ponds. It was early evening and the only sounds were the constant chirping of cicadas and the periodic rousing choruses of croaking frogs. Paradise regained!
My reverie was broken by the phone ringing. Miss Ngoc Bich, the vice director, was calling to invite me to dinner at the beachfront restaurant. Soon we were seated at a table with sea breeze blowing. Our fellow diners were large groups of Vietnamese families. Many more locals were enjoying beach activities or in the swimming pool. It was Sunday and packed. Some were from town but others had flown in for the fun from Hanoi or HCMC.

The first dish to arrive was new to me â€“ sticky rice stuffed with slices of succulent chicken breast. Quite tasty. The main dish was more familiar. A whole large steamed grouper fish, head body and tail. There were green vegetables and slices of raw young banana and rice paper, indications of a roll your own feast. Miss Ngoc Bich could hardly suppress her laughter as I wrapped pieces of fish and foliage into clumsy fat wads. Despite not having mastered this art I really enjoyed the meal. I was offered dessert but elected to finish in traditional style with fresh fruit. I mentioned a famous Danang fish noodle dish I was anxious to try namely â€˜mi quang caâ€™, Miss Ngoc Bich enquired of the smiling young waiters if this would be available for breakfast. â€˜Only the pork versionâ€™, came the reply. â€˜Do not worryâ€™, said Ngoc Bich, â€˜I will take you to the best place in town to try this for breakfast. I should like you to meet my brother-in-law there too. He runs the company which owns the hotel.â€™
I stayed up late glued to the TV to find out which of the two Manchester teams would win the Premier League. This was only decided in the dying moments of stoppage time after which I slept like a baby. I awoke shortly after dawn. Rousing revolutionary music was playing over a public address and announcements were being made which, thankfully perhaps, my knowledge of Vietnamese did not extend to my understanding. More comforting was the moaning and rattling of a train making its way through the suburbs.
There was time to observe guests eating their buffet breakfasts. It was largely local breakfast fare on offer but there were also a few western things such as ham, jam and bread. Miss Ngoc Bich arrived and whisked me off to the Trum Lam Vien (Bamboo Garden Restaurant) restaurant in town. And a lovely leafy place it was too with its large size bonsais, caged birds tweeting and pond. The dainty dish of strip noodles covered in chopped peanuts and spring onions made a mouth watering alternative breakfast to the more well known â€˜pho noodle soupâ€™. The fish used is snake head marinated in seasoning and water. The bones and head are ground and filtered with water to make the stock. Herbs such as coriander, bean sprouts and chopped banana bulbs are lastly added. I can recommend seeking out a bowl of these rice noodles to any visitor to Danang as a must do.
Just after it had been served Ngoc Bichâ€™s brother-in-law Nguyen Dinh Chien chairman of the â€˜Thanh Datâ€™, which is the company owning the hotel, arrived. He is an enthusiastic man of around 40 brimming with ideas and expressing them in rapid fire Vietnamese which left me struggling to comprehend. Luckily Ngoc Bich was there for interpretation. I was put into the picture. The hotel had been taken over by â€˜Thanh Datâ€™ in December 2011. I had noticed some alterations going on relating to the buildings. The hotelâ€™s name has been changed to â€˜The Natureâ€™ although â€˜Red Beachâ€™ signs have not yet been taken down. The general plan is to use the remaining land to build time share villas, a small shopping centre, and some entertainment facilities. I was asked if I could provide a slogan for the new complex. I thought long and hard. The best I could come up with was â€˜Shop, Drop, Play and Stayâ€™.
Then it was back to the resort where they had wanted me to sample the â€˜Spaâ€™. There was however only time for an inspection. I am able to report to you that they have the â€˜worksâ€™ here. Besides a sauna, steam bath, jacuzzi and a 24 place massage parlour there is also a foot massage room and a full treatment beauty salon.
Soon a car had arrived and it was time to start out for the next destination on my mission- the museum port city of Hoi An. And so it was that with friendly reception staff waving farewell that I took my leave of this fair hostelry.