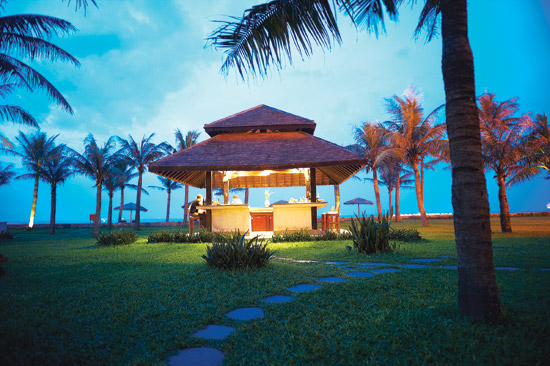 Relaxation between lagoon and the deep blue sea

Out on a long spit of land graced with a sandy strand forming the barrier behind which lies South East Asiaâ€™s largest lagoon you will find one of Vietnamâ€™s best beach resort hotels. The Ana Mandara is located fifteen kilometres east of the ancient capital of Hue and much of its architecture and interior room design is inspired by the opulence of Imperialâ€™s Cityâ€™s monuments.
There can be no other city of a quarter of a million souls outside of Vietnam that possesses no bus system other than Hue. It seems the poorer a place the fewer buses it has. This extends to a lack of public transport to outlying villages. I did see one or two bus stop posts but these appeared more for the purposes of leaning against whilst you watch the girls go by. The Ana Mandara thus can be difficult to reach. You could do as the locals do and go by motorbike. I regard this as unsafe and undignified. I refuse to risk life and limb of myself and family. It comes as a relief to know that the resort does operate a shuttle bus but it seems to run on demand and they were not coming in town just to pick up one family. Four wheels good, two wheels bad as the saying goes. There was no alternative but to hire a taxi for the equivalent of $10. When you consider you can go the 160 kilometres from Ho Chi Minh City to Mui Ne in a just as comfortable air conditioned coach for half this price a tourist might consider saving the beach part of his holiday for there.
Aside from the minor detail of access once you arrive at Ana Mandara you will certainly not be disappointed. First appearances count for a lot and the lobby is truly magnificent. You will feel grander than entering the Hue citadel. Upon mounting a stone staircase from the top of which water bursts forward in fountains of urns you enter a wide open hall fit for an emperor. Ahead of you is a long ornamental infinity pool and beyond that the boundless ocean. What an entree! Extra kudos are in order as they have thought of the disabled by incorporating a ramp system.
A member of staff with good English, Mr Quan, took our bags and led us to our Beach Front Villa. Fresh fruit and tea making facilities were complimentary and soon we were partaking of these on the ample verandah. A daisy lawn with a path leading to the well-manicured beach was in front of us. The room itself was sumptuous with a four poster bed, black hardwood furniture and cushions and sofa in royal Hue purple. A cabinet held ceramic jars that looked as if they had been salvaged from a centuriesâ€™ old wreck. The bathroom redolent of lemon grass had all manner of toileteries and both an indoor shower and another in a small garden with high bamboo walls.
A big plaudit to Ana Mandara â€“ they did not decide to build this resort in an isolated place in order to gain a captive market. It is right alongside the fishing township of Thuan An. The advantages of this are manifold. Not only does it ensure that the fish and seafood on the tables of its two restaurants (One of which specialises in Hue dishes) are super fresh but it also contributes to the local economy with employment. A waitress at breakfast estimated that seventy five per cent of staff were local. Especially as bicycles are available for free, another advantage for the guest is that one can experience at ease the life of a Vietnamese fishing community.
For the first night we decided to dine out in the village and enjoy a stroll among the friendly local folk. After walking just eight minutes we found a supermarket with a Vietnamese fast food outlet. My wife and daughter who had been feasting on â€˜bÃ¡nh bá»™t lá»câ€™ (manioc dumplings stuffed with prawn) were not hungry. They just enjoyed the Walls ice cream. I had a seafood rice platter for a mere VND15,000.
There is plenty to do at the Ana Mandara. Apart from the beach there is a large pear-shaped swimming pool and a games room. Cookery classes can be arranged. A large number of excursions can be made through the tour desk. If you are feeling more adventurous you could use bikes to explore the paddies, the shrimp and aquaculture farms and maybe hunt for crabs in among the remaining mangrove patches.
The thought occurred to me that being exposed to the ocean might be dangerous in the typhoon season. My wife, who is a Hue person, remembers a terrible storm some thirty years ago that caused severe damage and loss of life. I raised this concern with management who assured me that an evacuation plan is in place and that all staff are fully trained in the procedures.
To conclude, the Ana Mandara Beach Resort gives you a first class Vietnamese beach experience in opulent surroundings. If you are heading for historical Hue you can now be not only be a â€˜culture vultureâ€™ but also a beach basker and a lagoon lingerer.
Deluxe Room VND2,058,000++
Duplex Suite VND2,730,000++
Beach Villa VND4,788,000++
Pool Villa VND8,190,000++