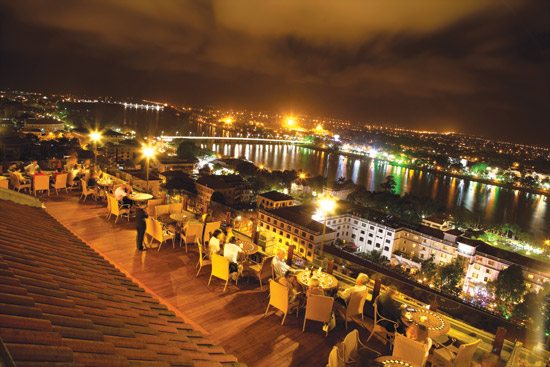 Royalty returns to Hue in 16 stroreys

At the Kingâ€™s Panorama Bar

The Imperial Hotel is a themed hotel with elegance and charm that lets you know from the moment you step through its huge magnificent portals that replicate the entrance to the Imperial Palace that you are not only in Vietnam, but in its cultural heart: the ancient capital of Hue.
Regarding dÃ©cor, I do not refer to dolled-up Las Vegas hotel type frippery, although there is a gaming facility for those who like to flirt with Lady Luck. Everything here is in the best of taste. The huge lobby with its magnificent colonnades and lotus flower-shaped lamp shades hanging from the ceilings give you the feeling of entering a palace hall. The staff is dressed as courtiers of a golden age and even the gilded lift area has dragon motifs on its columns. In the corner is the â€˜Mocâ€™ (Sino-Vietnamese for wood) Restaurant with its stately European eighteenth-century style commodes and dark hardwood Oriental screens. On the room floors are black and white and browned photographs of Hue and its people in bygone eras. Everywhere there are reminders of Vietnamese heritage and Hue’s glory days. My favourite piece of all, out on the top floor terrace, is a brass statue with the curves of a young girl carrying a bamboo pole with two baskets laden with real flowers.
The room I stayed in, a junior suite, was also full of reminders that I was in a city with a very special history. I particularly admired the framed set of ancient porcelain saucers on the wall and the beautiful black wooden furniture with their carved-in motifs. There was a wonderful view of the river a few hundred metres away and at night I sat in the drawing-room area looking out at the famous girder bridge illuminated in ever-changing colours.

Lobby and at the entrance.

Even if your budget does not extend to a stay here, there is one thing which has become as much as a â€˜must doâ€™ for Hue as breakfast at Tiffanyâ€™s. Be sure to book your place for a sun downer cocktail at the top sixteenth floor bar. The 360 degree views are absolutely stunning. You see all of Hue: stadium, cathedral, Imperial palace, the bridges, extending out to the mountains and the bright green paddies out toward the airport. From this vantage point, marketing manageress Miss Ngoc Hoai explained the geomancy, or the feng shui, behind the selection for the site for the Hue citadel. The two islets of White Tiger and Blue Dragon in the Perfume River were like guard dogs and the Ngu Binh mountain to be seen southwards in the shape of a table was both its protective front screen and defending wall.
In the face of all of this cultural stimulus, I was a little disappointed at breakfast with my fellow countrymen: a party of around forty recently retired solid middle-class folk sporting standard southern English accents, salt of the earth kind of people. Every single one had full English breakfast, despite the wide range of Vietnamese food to choose from. Some of these are going to get through their entire holiday without even trying â€˜Phoâ€™ I mused. But maybe they did try the well-promoted speciality of this hotel: the Hue Imperial Banquet. This is normally held in the Royal Banquet Hall on the second floor, with guests dressed up for the occasion in royal robes and thrones set for the lucky couple chosen to be Emperor and Empress. I tried the set menu myself in a party of four and will give you a taste of what you can expect.
I sat down in the Starlight Lounge to partake of the Imperial dishes in the company of three Hue-born ladies, my wife, my daughter and Miss Ngoc Hoai. First up were the khai vi, or appetisers. There came Breaded Shrimp on sticks, plunged into a colourful decorative phoenix carved from cucumber, carrot and dragon fruit, which whetted the taste buds. Alongside this, there was a Fig, Shrimp and Pork Salad to be scooped up by rice crackers. Continuing in the royal cuisine of serving many dishes in small portions came Steamed Red Fish, â€˜quite expensiveâ€™, my wife commented, eaten wrapped in rice paper. Then a French import â€˜Duck a la orangeâ€™ decorated with a circle of orange segments with sautÃ©ed vegetables in oyster. The final main dish, served in a generous portion, was the Royal fried rice. Unusual for a Vietnamese meal, we were finally treated to dessert in the form of Imperial Taro and Green Bean Blancmange. All very scrumptious and it is not every day one gets to eat like an Emperor.

Lobby and at the entrance.
Photos: Imperial Hotel

There you are then, a sixteen-storey tower block only seven years old that has succeeded with its decor and excellent service in recreating the atmosphere of what makes Hue famous. Whether you choose to use the Imperial as your base to explore this most aesthetic and welcoming of all Vietnamese cities, come here to enjoy its celebration of the best cuisine of the entire rich in food country or from its summit, view some of the most alluring urban photo opportunities of Vietnam, this is the place. If Vietnam should ever see the restoration of monarchy the next Emperor of Vietnam I feel would forego re-establishing himself on the southern bank of the river in favour of taking over the Imperial Hotel.