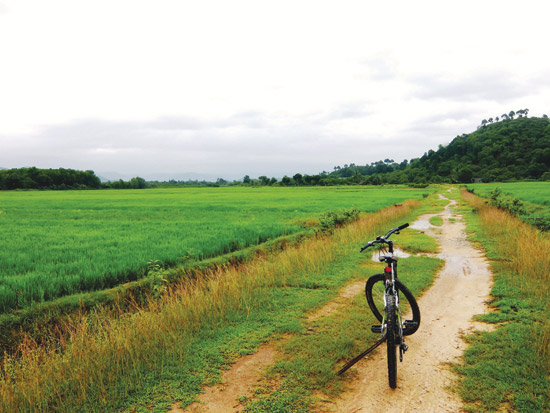 More than four hours on a bus from Saigon, I and a dozen people stopped at Cat Tien Farm Stay, Dong Nai Province. Cat Tien Farm Stay is not a place for those who love relaxing in hotels with luxurious amenities or modern architecture. Cat Tien Farm Stay has more than a dozen simple rooms and three bungalows around a garden full of durian, rambutan, grapefruit, cashew nut and chilli trees. The river flowing slowly, the wind playing in the bamboo leaves, and the cicadas singing in the trees all made me feel such peace that I did not want to think of anything except for taking a nap on a hammock hanging in the garden.
After being treated to a Northern Vietnamese lunch in the garden, we went to Ta Lai longhouse. There were two options; ride a bicycle on a 15-kilometre route with countryside scenes, or to go by car and then walk the last two kilometres across an ethnic village. We walked across a suspension bridge and through a village of Ma and Sâ€™tieng people. The quiet village featured two rows of small brick houses of the same size and model and were built by the government to encourage ethnic people to emigrate there. Ta Lai longhouse was on the top of a hill, overlooking a lake and on the border of Cat Tien National Park. The longhouse is a 52 square metre traditional bamboo stilt house with capacity for 30 people. It cost VND450,000 per person per night. Ta Lai longhouse organizes adventure tours to the jungle and camping trips for children from June to August.

Go to Mien Dong Bus Station and buy a ticker at counter number 5 for xe Kim Hoan at VND85,000. The bus will take around 4 hours and 30 minutes to travel from Ho Chi Minh City to Cat Tien
National Park.

We went kayaking on the lake covered with water lily and lotus flowers. Flocks of butterflies flew around. Birds sang songs in the trees. The view was so beautiful and serene and the air was so fresh. Our kayak moved slowly in the lake and we enjoyed a rare moment which is difficult to catch in the hustle and bustle of Saigon.
Back at Cat Tien Farm Stay, it was so interesting bathing in a large open bathroom with a river and forest backdrop. I felt closer to Mother Nature. I could see everything happening outside. Dark clouds came together in the sky. The wind started to blow and the trees shook wildly. Later in the evening, we had a barbecue dinner in the dim light in the garden amidst a light drizzle. I felt warm because of Gary and the attendantsâ€™ enthusiasm for serving. Gary is from Malaysia and is one of the owners of Cat Tien Farm Stay. He is a nature-lover, and I can feel his passion through his stories with and his excited voice and bright eyes.
The rain had abated, so I went outside for a walk. Unlike a noisy and busy city, the area around the Farm Stay was sunk in darkness and quiet. The road only had some lights from the local desert stall accompanied by the melancholy sounds of crickets and frogs. It made me remember my childhood in those days when my village was usually in darkness because of no electricity.
The next morning, I gaped at a large number of dead mayflies in the sink and on the ground. I hurried to change my clothes and took a bicycle. Gary had said that with a big jungle and orchard plantations surrounding us, the air is cool and fresh in the early morning, so I did not want to miss a chance to check it out. I stopped at a field with hills in the distance, took a deep breath of fresh air and felt the warmth of sunrays. The new day began full of energy. Following the guides, I rode to a local market, which was crowded in the early morning, and found the road to the pagoda for meditation. However I did not find any pagoda on the road. Gary smiled and said that the pagoda was located in the narrow alley in the village.
We visited Cat Tien Jungle Lodge, which will launch in November, 2014, before trekking to the jungle. The Jungle Lodge has a great view of Dong Nai River and the Cat Tien National Park. The hotel offers comfortable and spacious accommodation for more 90 people with a selection of rooms, bungalows, suites and tents. Also, the hotel has meeting rooms, a restaurant, cafÃ©, spa, a bar and bird-watching area. Certainly, it is for those who love not only adventure trips but also luxurious hotels.
Obeying the instructions of a guide, I covered my trousers with a pair of long socks and wore a sport shoes to protect from an invertebrate called váº¯t, which has its shape of a rubbery worm, and is about two centimetres long. The guide said váº¯t appeared a lot after a rain; they could know it was time to feed because of the temperature. So you kept moving continuously. If you stayed in one place for a few minutes, váº¯t would latch onto your shoes and would stick on your body and suck out blood.
According to the website of United Nation Educational Scientific and Cultural Organization (UNESCO), Cat Tien National Park is classified as a reserve of natural resource in Vietnam with lots of rare, special and endemic fauna and flora, and a site for scientists, domestic and foreign tourists. The natural area of Cat Tien National Park is 71.920 ha wide. Cat Tien National Park is part of the wet tropical forest complex and one of the few rare natural forests remaining in Vietnam. The diversity of the park has been recognized by WWF when it selected the park as one of 200 global ecological zones.
According to the brochure of the Cat Tien National Park, the park has 14 nature discovery activities, based on low, medium and high difficulty of the trails within the park. There are other activities, like taking a boat on Dong Nai River, watching mammals at the night, bicycling and visiting animals rescue centres.
We left the main road and discovered a three-kilometre trail to two giant Tung trees, which are hundreds of years old. The trail was narrow and slippery, surrounded by of a lot of trees. The guide showed us the giant Tung Tree. Its trunk was very straight with its roots that looked like walls sprouting from the ground and spreading over a wide area. The forest was noisy with our conversation and the sounds of birds and insects. Suddenly, we heard the sound of a gibbon. The guide excitedly pointed to a gibbon in the top of the tree in a distance and said that the male gibbon was trying to attract the females. It was a pity we did not bring a pair of binoculars so we could see the majestic male gibbon more clearly as it swung about at the canopy. Finally, we finished the trek and checked for váº¯t on our clothes, shoes, hair and bodies. Many váº¯t fell on the ground. Someoneâ€™s foot was bleeding. The others were bitten on the belly and back. The wounds did not stop bleeding for a while. On the way back to the entrance of the park, we walked by a stream and a bamboo forest with a number of colourful butterflies.