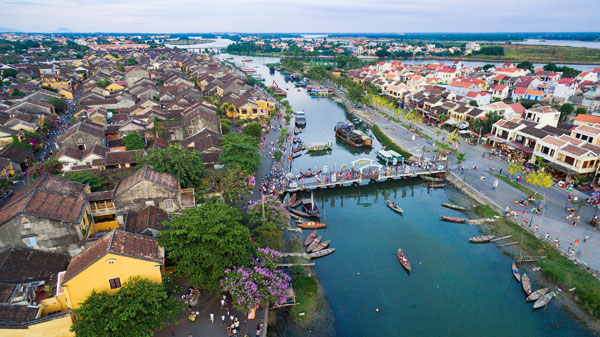 Catching fish on a river in Hoi An. Photo: Catalin Chitu

Ngoc Linh is a mountain range with many peaks between 800m and 2800m high scattered in Kon Tum, Quang Nam, Quang Ngai and Gia Lai Provinces. This highest and grandest mass of Southern Vietnamese mountains channels much of its water to Dak Di, the main tributary of Thu Bon River. Having descended from the mountains, the water flows north, passing through Nam Tra My, Bac Tra My, Tien Phuoc, Hiep Duc, Nong Son and Duy Xuyen Districts of Quang Nam Province.
In Duy Xuyen District, the flow changes direction to southwest â€“ northeast to join with the Vu Gia River. Before entering the East Sea at Cua Dai Estuary, Thu Bon River splits into Ba Chuom, Co Co, Dinh, Do and Hoi An rivers.
Thu Bon River has a total length of 198km. It is also the domestic river with the largest basin in Vietnam.
Passing through different landscapes and having many different branches, the river scenes are very diverse. Its upstream is wild and majestic, while the lower part is idyllic as it snakes through fertile paddies. Remarkably, Thu Bon River goes through two world cultural heritage sites, My Son Sanctuary and Hoi An Ancient Town.
Many famous traditional trade villages such as Nong Son aloe wood village, Tam Tang (Duy Xuyen) silk village and Thanh Ha (Hoi An) pottery village snuggle next to the river banks. Since 17th century, their products have gone downstream to Hoi An Harbour to spread to many destinations in the country and abroad.
The most famous section of Thu Bon is perhaps the one in Hoi An Old Town. This is actually a small branch of Thu Bon that the Quang Nam people call Hoai River. The usually slow and calm water intensifies the pensive feel of the ancient streets. At the same time, as the convergence point of goods that come to Hoi An Port, human activities around the Hoai River have always been hectic. Today, it is even more bustling, transporting tourists from all over the world for sight-seeing.
Regarding the name of the main river, legends have it that once upon a time foreign invaders killed Princess Thu Bon, daughter of King May and threw her body into the river. Compassionate locals gave her a proper funeral. Then came an epidemic, and people prayed to heaven for help. Princess Thu Bon heard their laments and came to the rescue. Since then, the villagers named their village and river after Her, built Her shrines and celebrate Her divinity every year.
Today, along Thu Bon River, there are many shrines and temples dedicated to Her. Every 3rd lunar month, the Duy Xuyen people have a Lady Thu Bon celebration to commemorate the person who made life on the river banks peaceful and happy. Perhaps Thu Bon is the river most soaked in the cultural heritage of Vietnam.
To the people of Quang Nam, Thu Bon is the most sacred river of all. They call it the Mother River.