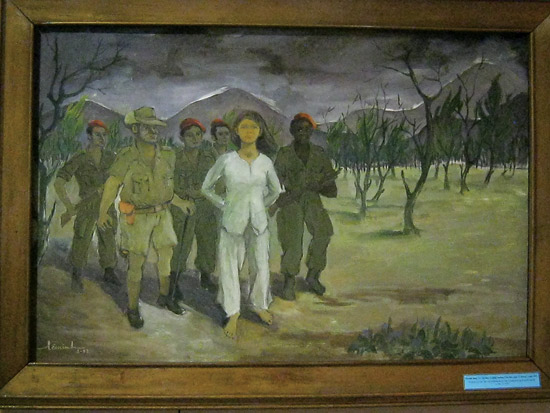 Anyone who has been in Vietnam for more than a few days should be familiar with the name Vo Thi Sau. Every town, small or large, will have one of its main streets named after her. Many schools also bear her name in order to provide inspiration to generations of children. She died in January 1952, aged only nineteen, executed by the French as a political prisoner. This happened on remote Con Son Island. On my recent visit to the Con Dao islands, I went to pay my respects and learn as much as I could about the girl whose heroine status is revered in Vietnamese minds. Although she left no offspring, she is worshipped by many as an ancestral spirit.
The basic biographical details are that, at the age of fourteen, Vo Thi Sau threw a grenade at French military in the market of her home town of Dat Do in Ba Ria Vung Tau Province, killing a captain and injuring twelve others. Later, at sixteen, she unsuccessfully tried to assassinate a Vietnamese canton chief responsible for many executions, was arrested and incarcerated for three years before being transported to Con Dao.
I visited four places associated with the young heroine. First port of call was her memorial hall, just a short walk along the promenade from our beachfront hotel. The building is traditional; red-tiled and yellow-walled. It stands in a beautiful garden and in front of it is a silver-coloured statue of the eternally young lady, standing defiant. Inside, at the altar, my wife Mai paid her respects, bowing and burning incense sticks. To the side of the shrine, there are two pictures etched in bronze. One is of her ‘action directe’ in the market place and the other of her capture. Proof of her sainthood had already been given to us. The night before we had been watching a World Cup game. My wife’s team (The Netherlands) looked set to lose by one to nil. She invoked Vo Thi Sau. Would you believe it? She responded with two late goals for a Dutch victory.
Next, we crossed the road to the new museum, which has a display telling the story of Vo Thi Sau. There are paintings, photos and a revolutionary bust. My daughter pointed out a song and a poem about her written by fellow prisoners. ‘We learn these at school’, she said. Explanations are given in Vietnamese and good English. Both the museum and the next place are free of charge. It is clear the Vietnamese want as many people as possible to know about her and other martyrs.
Many would pass by unaware of the third place associated with the maiden. There is a clear sign in Vietnamese to indicate that a traditional one-storey house on Le Duan Street, just behind the Saigon Con Dao Resort, holds a display of her memorabilia. I was moved by pictures of her Mum and Dad. Having a fourteen-year-old daughter myself, I really felt for them. I do not know how far she acted on her own, but to get hold of a grenade, there must have been adult involvement. As well as a great patriotic heroine, it would be good to remember the girl for having been a victim of a violation of the International Rights of the Child. No cause, however noble, deserves the sacrifice of a child and the moral issue of what circumstances-if any-merit the taking of human life is difficult enough, even for an adult. The most distressing exhibit of all I found was the paper in French including her name among those listed executed in the month of January, 1952. This building was the old police station to which she was taken to spend her last night alive.
Lastly, one should not miss a visit to her grave. Originally, it was a rough tablet made by fellow prisoners. I was surprised they were allowed to do this, as the remains of many of the thousands murdered by he French were just dumped in the woods by the beach nearby. There is a sign to commemorate this. She is buried in the Hang Duong (Poplar Tree) cemetery on the outskirts of town. She has fittingly been re-interred in a fine marble tomb. You can not miss it, as many pilgrims gravitate to it and there is permanent mist of incense smoke above it. If you come at night, you may see a young Frenchman beside it. No, it is not the phantom of The French Governor come to beg forgiveness, but M. Edouard Grosmangin, General Manager of the Six Senses who often brings guests along with him here for night-time vigils.
Four places, then, which you must put on your Con Dao itinerary. You will learn a lot from these little visits and you will be moved by the heroic tragic story of a young girl who gave all for her country, holding her head high right to her untimely end.