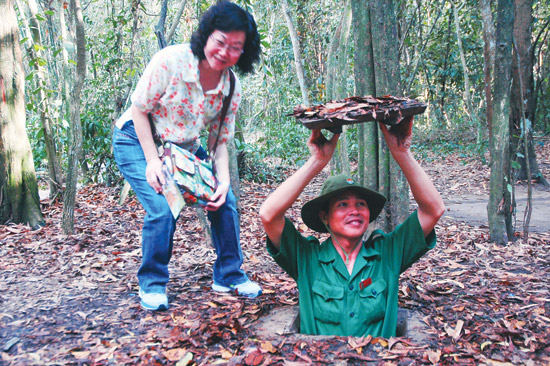 Seeing the light and experiencing the dark of Cu Chi Tunnels

In Cu Chi, during the lunar New Year in February, Quoc, a tour guide, led two dozen Japanese tourists into a tunnel. They were middle-aged and had heard a lot about the Vietnam War.

They chose Vietnam as their vacation spot for the lunar New Year. Each of them had a camera, took photos incessantly, and constantly asked the tour guide questions. Quoc said, â€˜we bring the tourists down here non-stop for a day during the New Year Festival.â€™
The network of Cu Chi tunnels, 60km Northwest of Saigon, started in 1946 as Vietnamese fought against French and was expanded in the early 1960s by Vietnamese Communists to fight against the US-backed Saigon forces during the Vietnam War in the 20th century. It is now one of the worldâ€™s top ten underground walks, as selected by National Geographic Magazine.
From the outside, few would suspect that a network of intertwined tunnels with a total length of 200km lies beneath their feet.
Quoc said, â€˜The tourists are curious and ask to see where the air holes are.â€™ Quoc led them to a termite mound, where there was an air hole as small as a crab burrow.
A group of young American tourists squeezed down a tunnel to take pictures. They joyfully shouted, â€˜Take a picture! Take a picture!â€™ Someone said, â€˜good luck!â€™ The door of the tunnel banged shut. Tree leaves veiled it discreetly. A moment later, an American lad popped up. Panting but enthused, he announced, â€˜Itâ€™s so dark!â€™
The individual tunnel is just enough to allow one person to slip through with a gun.
Foreign tourists often ask, â€˜Living like that in the secret tunnels, whereâ€™s the restroom?â€™ The restrooms are also a secret. Tourists spoke to one another about an American veteran, who said that they once laid in ambush along the river when the tides were rising. They thought that the Viet Cong would leave the tunnels to relieve themselves. However, it was the American soldiers who were ambushed and had to retreat.

Inside a tunnel at Cu Chi. Photo: Thu Ba.

The harsh life in the Cu Chi tunnels draws more attention than do grand structures. According to Van Hoa Newspaper of 9 March, 2011, the Independence Palace which was the office of the president of the US-backed South regime government, received, in 2010, close to 780,000 visitors, whereas the number of visitors who visited the Cu Chi tunnels has at least 1.26 million.
The group of Japanese tourists gathered round to squeeze into a section of an underground tunnel that was over twenty meters long. Some people in the American tour group turned back, daring only to tread above ground. An American youth told me that he was afraid of getting stuck because the tunnel was too narrow for him. Another feared that he would get lost underground!
Tourists stood next to the entrance of a tunnel to look at photographs that were taken inside the dark tunnels. Taking pictures inside the Cu Chi tunnels is not easy; the tunnels are narrow, tortuous, and quite humid. Many digital cameras take pictures that come out indistinct, so it is impossible to shoot photographs.
Two female Taiwanese tourists demonstrated their strength by lifting the gun barrel of a broken tank. â€˜We succeeded!â€™ they ebulliently exclaimed.
Gun blasts still resound daily at Cu Chi, from the shooting range reserved for tourists. Each bullet is sold for VND40,000 ($1.90). One clip has 10 bullets. Tourists only shoot for a few minutes before they run out of bullets â€” such is the dissipation of war. â€˜I learned to be a soldier at Cu Chi by shooting an AK-47,â€™ conveyed a tourist.

Mr So, an employee at the bullet kiosk, said that every day, several hundred tourists fire guns. They prefer shooting the M-16 submachine gun, since it looks nice.
â€˜There are tourists who fire up to 50 bullets before quitting,â€™ Mr So said, â€˜Itâ€™s been several decades, but the guns still work consistently without misfiring.â€™ Mr Soâ€™s older brother died from a cannon round when he left the tunnels to join a meeting. â€˜Quite a number of people were struck by cannon fire that day,â€™ Mr So confided in me.
Having squeezed into the tunnels, scaled hilled, and fired guns, the group of American tourists stopped at a canteen tent. A free meal is offered, evoking memories in some of the military canteens that served for a time along the roads of military operations where mothers who, without concern for bullets and bombs, saw off their sons when they went off to war, uncertain of the day in which they would return.
On worn-out wooden tables were boiled cassava dipped in salt and sesame. Tea was poured into old cups. The tourists ate the cassava with their compliments. They hunger was dispelled by the characteristic food of Cu Chiâ€™s parched hills.

The holes that helped win the war

â€˜Cu Chi was the most bombed, shelled, gassed, defoliated and generally devastated area in the history of warfare,â€™ wrote authors Tom Mangold and John Penycate.
The 40 square miles known as the â€˜Iron Triangleâ€™, Northwest of Saigon, served as a stronghold of the Vietnamese Communists throughout the Vietnam War. It was of strategic significance, because it straddled the main land and the river routes used by the Vietnamese Communists to smuggle supplies into South Vietnam from the terminus of the Ho Chi Minh Trail in Cambodia, according to â€˜The Tunnels of Cu Chi,â€™ by Ramon W. Almodovar, and J.David Rogers. This was also the only sizable area in South Vietnam where troops and vehicles could move easily during the monsoon season (May to October).
According to â€˜Cu Chi Tunnels,â€™ (Ho Si Thanh, 2002, Social Science Publisher,) there were subdivisions of tunnel with mouths accessing the Saigon River. These mouths allowed people to secretly cross the river to Binh Duong Province. The tunnels were resistant to cannon shells and the heavy weight of tanks and armoured cars. Some deep sections were capable of protection even against small-scale bombs. There were sections two to three storeys deep, and the lower (â€˜submergedâ€™), equipped with lids over covert openings leading to tunnels that connected the storeys. There were also block-points at sensitive spots to obstruct an enemy or to stop toxic chemicals. Numerous mouths were designed to serve as fighting nests, which utterly surprised the enemy. There were reserves of weapons, food and water, smoke-tight kitchens, meeting rooms for leaders and commanders, dispensary facilities for surgery, living quarters for wounded and convalescing combatants, and quarters for women, old people and children.
US air attacks, artillery, napalm and Agent Orange defoliant turned the land into a moonscape.
The Americans also used water to inundate the tunnels, bulldozers to unearth them and dogs to sniff out hidden Vietnamese Communist guerillas.
Soldiers of narrow build, specially trained, and known as â€˜tunnel ratsâ€™ crawled into the tunnels with a flashlight and a short gun to clear tunnels and destroy them with explosives.
Also, a special type of grass was dropped on Cu Chi. It grew very quickly, killing other kinds of foliage as they expanded their zone. It was very sharp, making it difficult for Communist forces to move and easier for US forces to detect them, according to â€˜Cu Chi Tunnelsâ€™ by Ho Si Thanh. When dry season came, the grass, known as â€˜American grass,â€™ became dry and easy to set on fire.
In 1966, 8,000 US and Australian troops attempted to sweep Cu Chi in what was called Operation Crimp, according to â€˜The Tunnels of Cu Chi,â€™ (Almodovar and Rogers). A year later 30,000 US troops raided Cu Chi again in Operation Cedar Falls.
The tunnels stood firm and were used by Vietnamese Communists to prepare for their Tet Offensive attack on Saigon in 1968.
Compiled by Le Duc Tan