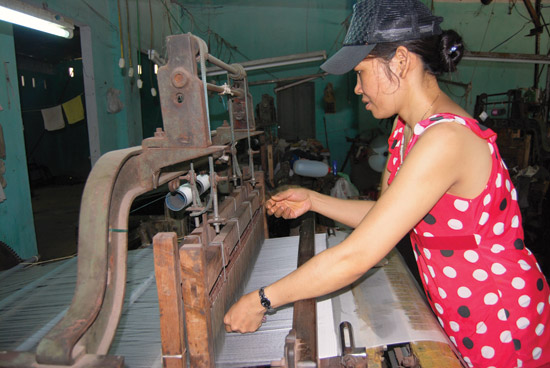 The silk production in Ma Chau Village in Duy Xuyen District of the Central province of Quang Nam, near the world heritage My Son Towers, started more than 400 years ago.
At 7 a.m., the sounds of machines can be heard from factories and households. The factory owners in the village say silk production stopped being profitable about ten years ago and most of the villagers began to make other kinds of cloth.
Over the past four years, the traditional trade has been growing again. The jobs of growing mulberry trees, growing silkworms, making silk threads and weaving are done by some members of Ma Chau Silk Cooperative.

Several jobs at the cooperative, like making silk threads and silk thread spinning are now still done by hand. Weaving is also done with semi-mechanical devices. When the weaving is completed, the processes of heating, dyeing and bleaching are all done by hand. Ironing and drying are done with machines.
The cooperative is now making ten kinds of silk and more than two hundred designs. The 100% silk products can be traditional silk, taffeta silk or patterned silk.
Tran Thi Anh, one of the 16 members of Ma Chau Silk Cooperative said, ‘I and a few other members stayed with the cooperative and even put in some more money of our own to retain the traditional trade when the cooperative was on the verge of liquidation in late 2008, after more than 300 members withdrew from the cooperative.’
‘At one time, I went to Danang to get less than one kilo of silk. It was just a little, but we might as well make some metres of silk, and wait for a better chance,’ the cooperative manager Tran Huu Phuong said.
Phuong and the other members of the cooperative tried to find ways to improve their machines.
Japanese experts in a project that helped develop natural dyes for ethnic minority people in Tu An Village of An Khe District in Gia Lai Province in 2006, taught the Central Highland villagers how to dye cloth by using colorants made from plants instead of chemicals. Now, most of the silk made in Ma Chau is dyed with colorants made from plants, Tran Huu Nghia said.
Ma Chau silk has been made known to many people the past two years and it is popular because of the different kinds and models available, and because the products are 100 per cent silk. Phuong said his cooperative is trying their best to raise the finance to make enough products to supply for the two showrooms in Hoi An and Tam Ky Towns, opened by businesspeople in Hoi An and Ho Chi Minh City. The cooperative itself also has two showrooms–one in Ma Chau Village and the other in the My Son Towers area. There is still one big concern now-where to get land for growing mulberry trees.

Text and photo by Huynh Van My