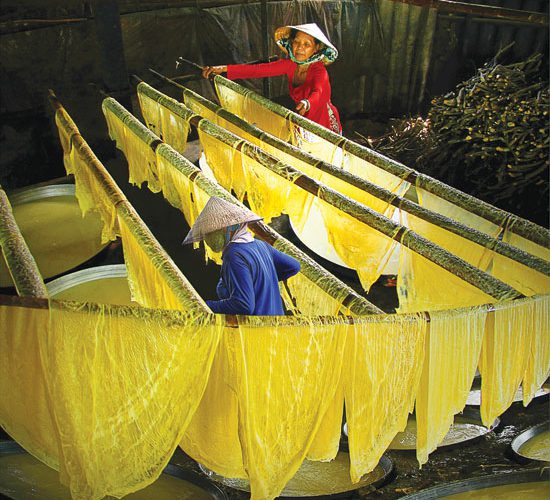 A long time ago, there was a poor couple making a living by selling soya milk. Once, they had a big fight and forgot the milk pot in the kitchen, and the milk began to scum. Not wanting to waste it, the wife hung the skin on the garden fence. When they ran out of food, the wife took the dried skin to cook for the family to survive the famine. It turned out to be good beyond anybody’s expectation.
That’s the story about how the dried milk skin, beloved by the Southern Vietnamese, came into their menu. It has high nutritional value and can be cooked in many ways.

Discovered by
accident, milk skin
is a way of life for
one village

Today many people make milk skin for a living in My Khanh 1 Village, My Hoa Commune, Binh Minh Township of Vinh Long Province. “My Hoa formed a milk skin trade village over 60 years ago. Right now, there are about 40 households engaged in this trade. Every day, 300 workers of the village make about 3 tonnes of milk skin of various kinds: big patch, dried and threaded, soft and threaded, salted, etc. In 2013, their products have been patented by the Bureau of Patent under the brand name of “My Hoa – Binh Minh Milk Skin,” according to Mr. Dinh Cong Hoang, head of My Hoa Milk Skin Cooperative.
The distinct and pleasant aroma of the milk skin spreads far beyond My Khanh 1 Village. The patches of milk skin hung along roadsides and river banks please the eyes of travelers who happen to come around Binh Minh Township.
The product is made of soya without using any chemicals. The process is quite simple. The soya is soaked for 2–3 hours, husked, and finely ground. The wet flour is pressed to produce a thick, white elixir. The milk is cooked until a layer of skin forms at the top, which is taken out to dry. 20-30 minutes later, another layer is harvested, and this continues until the pot runs dry. The workers are very busy because one person takes care of many such pots.
The whole process used to be done manually. But in recent years, to satisfy growing demand and the requirements of the supermarkets, some phases of milk skin-making are now done by machines.
The best time to make the best soya milk skin is from mid-October to April. But the busiest time for the trade village is just before the Lunar New Year. During this period, all of My Khanh Village is boiling together with their soya milk pots, with hundreds of people making milk skin and trading it.