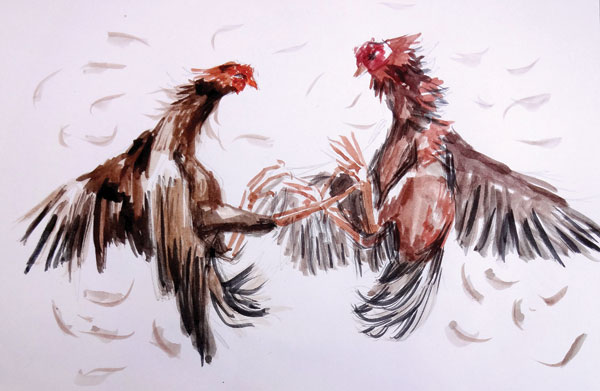 Chickens have been domesticated and grown by humans for a long time.
And with that, cock fight as a game appeared, becoming a heated,
alluring sport that reflects characteristics of many regions and nations.

Cock fights existed in India, China, Persia and other eastern countries. When General Themistocles (514-449 BC) of Athens marched into Persia and saw a cock fight, he ordered his troops to halt and watch. They saw ferocity and determination in the bird. The Athenians learned some specific tactics and moral lessons from these gladiators, which helped them in subsequent glorious conquests. Cock fights were then introduced to Athens to honour Greek power and prowess. Later, from a kind of patriotic and religious attraction, people became passionate about them. Cock fights quickly spread out all around Greece, Asia Minor and Sicily. The best fighter cocks were bred in Alexandria, Delos, and Tanagra and Rhode. The Romans disparaged this ‘Greek entertainment’ at first, but were then unable to resist it, and so it became not only a famous sport in Rome but also a subject of gambling that made many rich or broke overnight.
From Rome, the game spread north to all over Europe. Despite being banned by the Church, it was popular in Spain, France, The Netherlands, Germany, England and their African and American colonies. Not only the common people loved it, but so did the nobility.. In 1519, King Henry VIII of England ordered a cock fight stage to be built in front of his White Hall in London so he could watch the fights for himself.
Unlike single fights seen in the east, in the western countries, each fight involves a predetermined number of fighting pairs. The person who owns the most winning cocks is determined the winner. There are two very brutal and bias-prone ways of conducting a fight. One is to let a certain number of cocks into an arena and let them fight until only one is left standing which is the winner (the way preferred by the nobility). Or, 8 pairs fight to determine 8 winners, which will go to the next rounds to select 4, then 2 and finally 1 winner. This way is prevalent in Wales and Northern Europe.
In the 15th century Europeans discovered America. They introduced chickens to the new continent. In the 18th Century, the game became very popular here. Many famous presidents of the United States such as George Washington, Thomas Jefferson and Abraham Lincoln were cock fight fans and accomplished fighting cock breeders. In Argentina, the cock fight is popular everywhere. Many countries of Central America have big fighting cock breeding centres which organize regular events, drawing huge crowds.
In Vietnam, the cock fight as a sport is a part of folk culture. It appeared early and attracted people from all walks of life. During the Early Le period (980 – 1009) it was a frequent game in the royal court. In 1285, in his famous Call to the Armed Forces for the fight against Mongolian aggressors, Prince Tran Quoc Tuan of Hung Dao warned his soldiers, ‘Do not indulge in cock fights. Cock spurs can’t be used as a weapon to pierce the enemy’s armour!’ Cock fights are conducted all year long, but the most heated take place during the big festive events and New Year’s. Although often misused by some people for the purpose of gambling and quick profit, cock fighting in Vietnam is essentially a healthy, attractive sporting activity and a traditional cultural feature, which is full of fun and should be maintained.