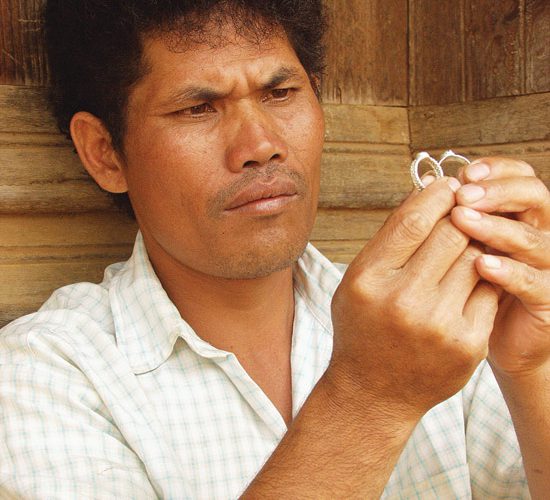 Sri has a familiar ring

Ya Tuat and his products

I came to Ma Danh village at Tu Tra commune, Don Duong district, Lam Dong Province, Central Highlands to visit Ya Tuat. He claimed that he had just trained three young men to be skilful Srí craftsmen. The traditional Srí crafting of Chu Ru people has now had descendants.
In the language of Chu Ru people, Srí means ring, ‘Srí K’may’ means the ring for women and ‘Srí L’cay’ means the ring for men. Ma Danh villagers said that among thousands of Chu Ru people, Ya Tuat has been for years the only person who knows the secret of silver ring craft passed from their ancestors. Recently, he was joined by his son, his brother and his brother’s son.
According to Ya Tuat, first, a fair length of a wooden stick is dipped and coated with molten beeswax. The coated stick is given time to cool. The stick is removed from the coat of beeswax, which is now solid. The coat is cut into rings. The rings are sculpted. They are dipped in a mixture of buffalo dung, clay and water and then dried in the sun for half a day to one day. Once the wax is removed, with the use of heat, the dried mixture forms moulds. The silver is poured into the moulds, which are then quickly put into water. After waiting for the clay and buffalo dung to dissolve, the rings are heated in water and honey that comes from locusts for a few minutes to make them shinier. Finally, Ya Tuat would whet, polish and attach seed of K?nia (Irvingia or wild mango, a local forest tree) to them if they are rings for men; as for women, their rings are only polished.

Ya Tuat at work

Ya Tuat said the hardest part of Srí crafting is making the mould. Buffalo excrement has to be taken from a three-year-old-male buffalo, when the sun has just risen. As for clay, craftsmen have to get it at a secret place in the forest that only they would know. If not for these ingredients, the mixture for the mould wouldn’t be burnt at silver’s melting temperature. Wood used to burn is from a forest tree called Kasiu. If another kind of wood is used, the rings will break, says Ya Tuat. On the night before making Srí, craftsmen have to isolate themselves from their wives to make sure they’re pure for the process. Ya Tuat says he usually starts at 4 a.m. and the last step will have to be completed at 8 a.m. Ya Tuat’s wife says that Ya Tuat’s parents forced him to learn this job from his grandfather. However, he couldn’t make any rings until after his grandfather passed away. Ya Tuat says: ‘This job is very difficult. You have to have a good eyesight, a clever mind and a quick hand to make it.’ Ya Tieng – Ya Tuat’s father says: ‘Although silver-ring crafting cannot make much money, it’s a traditional job of Chu Ru people. We cannot drop it.’
Chu Ru people believe a silver ring always brings much happiness and luck. So in their festivals, Chu Ru people often give each other silver rings, as for a good wish to their relatives and friends. Especially, for young Chu Ru men and women, a silver ring is not only jewellery, a precious dot but a sacred promise, symbolizing an engagement of the two. A woman loves a man? Give him a Srí. If he didn’t agree, he would return the ring. What if she’s still in love with him? After seven days, she would give him the Srí again. After three times, if the man does not return the ring anymore, the woman might now ask someone to go to the family of the man to talk about the wedding. Usually, in a Chu Ru wedding, there have to be not only rings for the couple but rings for both of their relatives. When giving rings, the woman gives the ring to the man first. After they have given rings to each other, the rings will be kept in a secret place by the groom’s mother. In case they want to divorce, their families would bring out the rings to arbitrate. If the ring is returned, the one who betrays would have to compensate the other side with buffalo. However, this is very rare for Chu Ru people.

Text and photos by Trinh Chu