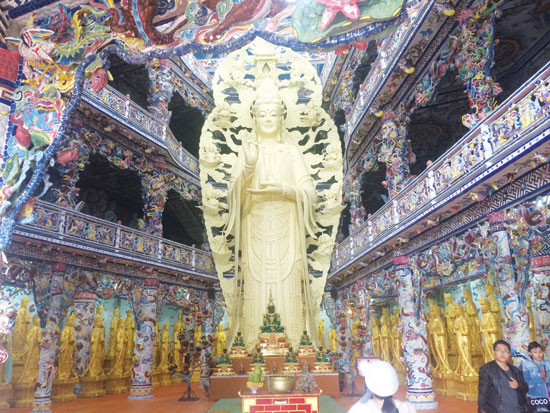 Located at Trai Mat, eight kilometres from the centre of Dalat, Linh Phuoc Pagoda is famous, thanks to its structure, which is intricately adorned with millions of pieces of broken bottles and ceramics.
The pagoda was built in 1949. During the 1990 renovation, many new features were added.

Visitors are first impressed by the Dragon Garden, where a 49-metre long dragon, its scales made from 12,000 beer bottles, appears to glide around a Maitreya statue.

In front of the garden is a 37-metre high, seven-storey tower. The first floor houses a 4.3-metre high Great Bell, 2.3-metres in diameter and weighing 8.5 tons. A group of artisans, three generations in the bell-casting business, was invited to design it and spent over a year to mould it and to carve reliefs of Buddha and Vietnam’s famous pagodas on it. The bell can turn and has four faces representing the four seasons. The whole tower is adorned with ceramic mosaic of dragons and phoenixes.

The sanctum is 33 m long, 22 m wide, and stores valuable Buddha statues. Two rows of ceramic inlaid dragon pillars run along the hall. On top of them are reliefs depicting Shakyamuni’s life from his birth to his reaching Nirvana.
A statue of Avalokite?vara Bodhisattva made of 650,000 eternal flowers sits in the courtyard.

Another unique feature of Linh Phuoc Pagoda is its 18 levels of hell tunnel that tells the ‘Mother seeking Muc Lien’ story. To visitors, the 300-metre long tunnel is a lively demonstration of karma and filial piety. This hell scene is also a message to the world’s inhabitants: nurture your virtues and fulfil your filial duties.n