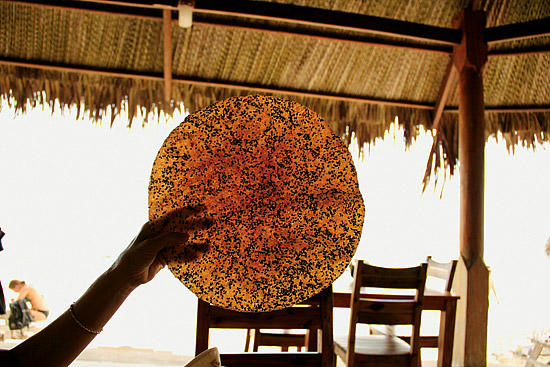 The astronomer of Star Beach

admin20 November, 2019
Travel0 Comments 0
In the late afternoon a man with a red face and red, collared tee-shirt over broad shoulders came up Bai Sao (Star Beach) and asked whether there was a place he could socialize, a bar or some such, on the island. He was well-mannered, with a working-class English accent. The need for a pub could not have been put better, or seemed more reasonable. We asked him some questions. He had arrived on a boat from Cambodia at An Thoi, the second town, only a few hours earlier, but determined already, having visited the main town, Duong Dong, twenty-something kilometres north-east from Bai Sao, that, â€˜This is a very quiet island.â€™ The island was Phu Quoc, Vietnamâ€™s future playground of the rich, apparently, off the southern, west-facing part of the countryâ€™s mainland and part of Kien Giang Province.
The Englishman, whose possibly Cambodian woman companion stood a little to the side and behind, also wanted to know if there was a place to sleep. We could only suggest he ask about further; we had booked a place for the following night and suggested he try there, a few hundred metres away, near the southern end of the beach, at the Ai Si Hotel, which, though we did not know it at the time, would become the centre of our Phu Quoc adventure. The day after our return to the mainland, I read in the Viet Nam News that â€˜More than 70 guitars belonging to the legendary British music icon Eric Claptonâ€™ were being sold in aid of his drug and alcohol rehabilitation centre in Antigua. The Ai Si Hotel could well become both legendary and iconic, in its very particular way, to our band of three holidaymakers, and others, no doubt. On Phu Quoc, as elsewhere, these days, there are those who want things to become legendary and iconic before they go through the stage of realness. We had been there at the time of realness of the Ai Si.

I had had an inkling things would go well at Bai Sao while we were still at the Mango Bay Resort, north along the opposite, western, coast of the island, beyond Duong Dong. To say that Mango Bay Resort was more up-market is true but ridiculous, so much are the two places worlds apart. MBR is a must to record, however. It is, and has been for a long while, perhaps the place in Vietnam holidaymaking best at showing that many guests will pay more for having fewer of the banal, knee-jerk facilities like telephone (none in the room, at MBR), fridge (none in the room, just a wooden ice chest) or air-con (there is plenty, but it is not electric and its breeze is powered by the alternation of day and night that draws air on and off the island). In the MBR dining pavilion the waiters wear jeans, not pomp, and the focus is on the food, which is of the kind the Admirable Crighton, if you remember the film, or even the play, might have served to Robinson Crusoe, such as fish barbecued in banana leaf. We stayed in a â€˜Plantation Bungalowâ€™, which sums up the spaciousness of MBRâ€™s seaside domain, which is cropped by cows wearing almost tinkling wooden bells. While the sound of the bells as the herd did its round near your Max Havelaar-style bungalow, if you remember the book and film, was the sonic motif of MBR, the gobble of turkeys was the motif of the Ai Si.
The car south was intercepted by another, because it had taken some wrong baggage, and when we rang ahead to ask Ai Si (a name that at first flush could be taken to refer to the temperature of their beer) to take special care to wash the mosquito nets our room had been given over to another or others, possibly the Englishman and companion. This was the holidayâ€™s what-the-hell moment and we were really living, going to stay at Bai Sao anyway. The salt-of-the-earth Phu Quoc people really live, and it seems that in reality you can move in when you arrive and move out when you leave, if a room exists, and not worry about such surrealisms as bookings or saying you are extending your stay. We were about to enter the high period of what our own guest, the third in our party, who came to be called â€˜the Astronomer Royalâ€™, would call, in the middle of the night, â€˜the holiday from hellâ€™. I was later willing to bet he was on his back in his cosy hotel in Pham Ngu Lao Street, Saigon, saying to himself, â€˜I am not going to forget what they [his friends and hosts or companions] did to me on Phu Quoc.â€™ He muttered on the way to the Phu Quoc airport, â€˜How could you write this in a magazine? It would take a 400-page book.â€™

So, my thesis is that the star of Bai Sao, probably the most beautiful spot on Phu Quoc and symbolic of the island, the star in the sky, is to be outshone, according to very different astronomersâ€™ charts, by the stars in brass beside the doors of hotels and that the island is now in a period of mystery and suspense peopled by such as the hopeful but perhaps early â€“ it was around the beginning of March, 2011 â€“  Englishman from Cambodia. Who knows? Would he be the sort of person to be attracted to the prevailing, particularly at Mui Ne (in southern Central Vietnam), view of developed beach holidaymaking, in which the sea tends â€“ fact of life â€“ to be used more or less for sewage-disposal and is replaced, for those who want to swim, with a chlorinated infinity pool? As I waited to pick up our suitcase at Ton Son Nhat, I photographed an advertisement for a Mui Ne resort with Reckittâ€™s-blue pool water appearing to lap as high as the equally blue sea beyond. Would the groundling astronomers take over Bai Sao, and Ong Lang, and other natural environments of Phu Quoc? Could this be compensated for by the provision of such things as brown-bread salad sandwiches with Dalat lettuce and tomato, butter from New Zealand, cheese from Bega, New South Wales, and ham from Parma, served with a small dish of first-cold-pressed olive oil?
We were supplied at the Ai Si with a battery-powered (or did it have a monster glow worm in it?) lamp that was too bright to look at but which threw very little light on anything around it. During our last night I got up saying to myself â€˜Point Percy at the porcelain.â€™ Odd, I thought, but in I went to the bathroom, by the slight glow from the lamp on the table in the bedroom. I fired determinedly at the gloom of the bowl, but kept getting ricocheted in the shins. Of course, the Astronomer Royal had been before me, and put the lid down, and I had pointed at the plastic. And some time before that I must have heard him in my sleep go to the bathroom and I must have tried as if in a dream to warn myself with the alliterative line. The astronomer had revealed, as the morning light surrounded the star, that he thought of adventure not in such things as plastic versus porcelain but rather as something like what he had once encountered in Indonesia, something I dare say more legendary and iconic, where he been able to speak the language, and had been last-minute, impromptu guest of honour at a village headmanâ€™s wifeâ€™s funeral, where he had been handed the lionâ€™s share of a liver, raw. A few days after our return to the mainland, the Astronomer Royal told me he had bought a bottle of gin and systematically called up and deleted the worst memories of the adventure from his nervous system. And yet he also averred he would never want to stay in a seven- or even five-star hotel or resort. He was betwixt and between, like most of the foreigners we saw at Bai Sao â€“ rather, if one were to guess, like the Englishman off the boat from Cambodia.

Text and photos by James Gordon