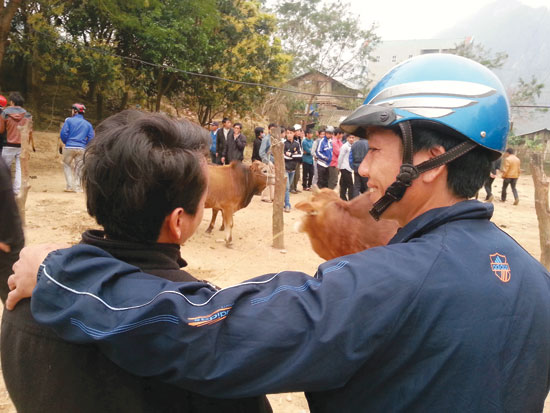 Counting money without fear of thieves

Taking bulls to the market

In Bao Lam District of Cao Bang Province, cows are highly valued because they help reduce poverty. Men love to take their cows to the fair just to show off. So, the people’s committee of the district chose the 20th of the first lunar month every year to organize a Beauty Cow Queen and Bull Fight festival. This has become the merriest and most crowded event of Cao Bang Province and the Northern highlands.
Mr To Manh Hung from the district Dept. of Agriculture and Rural Development said, ‘to the H’mong, the cows are the most valuable asset. All households have them; some even have dozens of them. The H’mong take good care of their cows. They build them roofed stables to keep them warm, and grow grass to feed them. For generations, Bao Lam has been famous for the breed of H’mong hunch cows. The bulls are strong both in the paddy fields and in the fighting rings.
The locals have a saying, ‘the cows support the poor’. That’s because cows are cheaper and easier to grow and breed than buffalos. The H’mong only keep cows. They don’t keep buffalos. Their cows are big and strong, with a big hunch on the back. The bulls are so ferocious they can beat even the buffalos.
In 2000, the district was formally established. H’mong, Nung, Lo Lo and San Chi people are the majority of the local population. Before then, each household lived on a mountain and depended on rain to grow rice and corn. Famine and poverty were chronic. The H’mong and Nung had a good tradition of cow culture, and beef was expensive, but each household only had a few cows. So the local government created good conditions for them to develop their cow culture. After 10 years, the district has tens of thousands of cows. Over 60 per cent of households grow them, and most have income from VND20 to VND100 million a year.
I hiked the mountains for two hours to come to Na Cut Village, an exemplary site. Over 30 houses dwell deep in the forest, without asphalt roads and electricity. But all households had motorbikes and motor mills that ran on oil. Stables were built from wood panes, and were clean and neat. Grass and fermented food piled up nearby. The huge cows and bulls seemed to enjoy the food enormously.
Since 2008, on the 20th of the first lunar month every year, the district government organizes a cow festival. Most of the top prizes go to the Nam Mioong Village, Quang Lam Commune. Hearing this, I crossed Gam River by Na Bang Bridge and climbed up to the place.
My companion told me that most of the 50 households of the village were passionate about bull fighting and they all kept and trained some fighter bulls. And the best, they said, were those of the village chief Ly A Tu and his two sons.
While still some distance from his gates, I heard the sound of chopping. Two young men were chopping elephant grass and leaves for huge bulls, who ate like grinding mills. Ly A Sinh, Ly A Tu’s son, said that they were all fighters, each weighing from 500kg to 700 kg. So they consume a lot, faster than grass can grow, he said. The whole family had to collect their favourite leaves in the forest to fill their needs.
Contemplating the robust bulls, the father and sons told me about their beloved pets. As the story goes, the bond between the H’mong and these animals is ancient. They lived high up in the forest-covered mountains, so the bulls often had to defend themselves from tigers and bears. That created their ferocious and spiritual nature. The H’mong cherished them as their guardians, made them clean and neat stables from strong wood and fed them well.
Mr Tu was ecstatic, ‘You have to choose a young bull and train it for six years. The head must be big and hard, horns straightforward, eyes big, keen and sharp, chest wide, fur glossy, legs long and lean, and tail reaching the soil. Such a bull can fight all its life. Beside the elephant grass, their diet should include some special leaves to improve their strength and endurance.’ The bull must fight regularly, for the H’mong love bull fights. Anybody who has a big bull would seek a fight when farm work is over, on a festive day, or even at a bazaar. Before a show, the bulls rest for a month or two. They are fed with corn and forest leaves, and their horns are sharpened. Well-trained bulls have high skills, instincts, spirit and wit. A clever fighter bull would let the other bull attack first, waiting for the adversary to get tired, and then it would go for a knock-out. Some even understand their owner’s hints. This depends on the owner’s experience and affection. Ly A Tu family’s bulls, sometimes only weighing 600-700 kg, can often beat opponents who are much heavier.
In 2014, the Beauty Cow Queen and Bull Fight festival attracted over 20,000 locals and visitors. The organizer selected 32 bulls, divided into category A (over 440 kg) and B (under 440 kg) for the show. They also let 11 cow-calf couples compete to encourage and reward herders’ work. Criteria includes perfect health, strong build, glossy fur and skin, quick, sharp eyes, broad chest and shoulders,  straight back, big hips, tall, straight and sturdy legs, soft neck movement, natural gait, firm stomach, no sagging, and well-developed genitalia and breasts.
Mr Vu Ngoc Luu, district head and chair of the organizing committee of the 7th cow festival of 2014 told me, ‘A special thing about the Bao Lam bull fight is that they come home after the fight and go on working the fields and training for the next year’s competition. They are not slaughtered like in the buffalo fights organized by other provinces.’n

Text and photos by Do Quang Tuan Hoang