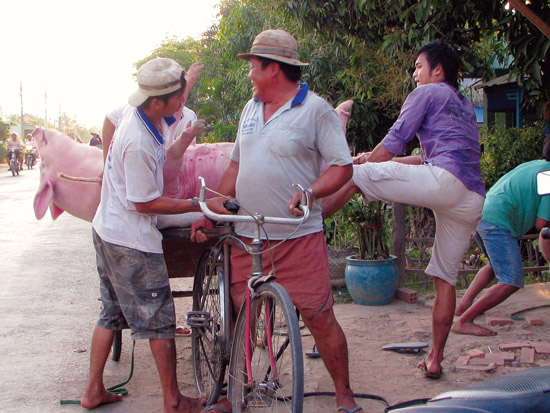 The dreadful weight of the bones

T?t was approaching. We were not expecting it. My grandmother had died that year. There were only my aunt and me in the family. The house had been left unfinished since my grandmother had fallen sick. The money my aunt had borrowed for the funeral had not yet been repaid.
In previous years, when the village paths got busier with the approach of T?t, when firecrackers crackled, my grandmother had collected the sticks from the garden to bain-marie ch?ng cakes.
On the last day of one lunar year. The pig was sold to a group of families in my village. It was a popular practice in the north for people to share a pig to make dishes for T?t. That way each ‘pig-sharer’ could have a bit of every edible part of a pig: the ham, shoulder, side, belly, loin, ear, tongue, stomach, heart and blood. All were necessary for the food tray offered to ancestors on New Year’s Eve. It is also cheaper because there is no middle man involved. The ‘pig-sharers’ slaughter the pig themselves.
We – the two old women and a teenage girl – had not been able to make a decent pig pen. So the pig had run loose and followed me around like a friend.
When the pig was carried away, it roared and squealed. I can still visualize its begging eyes looking at me when they were being carried past on a bamboo pole.
Normally when she sold a pig on the last day, my aunt got some of it back for New Year.
I had lost the pig, but gained meat treats in the house. The loin, which my aunt had boiled, hung over the doorway and steamed. My grandmother used the bones to make broth. I went to the garden and pick herbs for the raw blood pudding (ti?t canh). Even today, most families in northern Vietnam make raw blood pudding as a specialty on New Year’s Eve. The colourful mixture of blood, meat, roast peanuts, herbs and boiled cartilage makes it a mouth-watering dish to many.
The blood pudding along with other dishes were put on the family’s altar to offer to our ancestors on the last day. Then they were brought down and eaten in what is called ‘b?a c?m t?t niên’ or the last meal of the year.

I remember how I enjoyed it. I could feel the congealed blood going down my throat, melting sweet on my tongue. The cartilage and the peanuts were crunchy between my teeth. The meat was tender and juicy. The herbs were fragrant. The feeling of guilt about eating the very pig I had tended I justified by thinking that it was becoming a part of me.
It was one of the best and biggest meals I had been waiting for the whole year.
The T?t after my grandmother died was different. The pig had been sold for my her funeral so we did not have one to sell to get a part of it back. T?t was the time to please the deceased. We had to have some meat for the offering tray on the ancestor altar.
My aunt told me to go to my cousin’s to buy into her share with her neighbours from a pig they had slaughtered together.
Barefoot, I crossed the river on a little bamboo bridge. I went across a paddy field and a village.
When I arrived at my cousin’s in another village, a huge tub of boiling water was steaming in the middle of the yard. Near the fish pond were men and a pig, which was roaring desperately. From a cut on its neck blood was gushing into a steel basin. When the last drop of blood flowed out, the pig went quiet. Its eyes were blurred and still.
After removing the pig’s hair, the men gutted the animal. Nothing went to waste, except the feces and hair. The kids got the bladder to play with as a ball and the tail to eat. Some of the blood was reserved to make raw blood pudding. The rest of the blood was used to go in the bowels, together with herbs, fat and banana flowers, to make haggis.
Then came the dividing. Some of the meat, some of the bones, some of the intestine . . .
For some reason, people did not want a part of the head. They insisted on me getting it. My aunt could pay later when the harvest time came. I agreed. I liked it because it was huge. I was hungry, always hungry. I had not eaten meat like this for a million years. So the pig head was more appealing than anything else in the world.
My cousin lent me a bamboo basket. She put the bleeding pig head in the basket and lifted it to my head for me.
Spring had begun. Drizzle was setting in. The earth paths turned terribly slippery and many times I almost tripped over or fell into runnels.
When I came home with the bamboo basket on my head, my aunt was appalled.
‘What is it? Why is this?’
‘A pig head. I took it so that you could have fat for the ch?ng cakes.’
‘Oh no, it’s too big! I cannot chop it up, dear.’
‘Yes, you can. You remove banana trees. You dig the garden. So you can cut a pig head.’

My aunt cried. She insisted that I return the pig head. I cried and insisted that she keep it.
No one compromised until my neighbour came over to offer to help with the chopping. And it was then the real reason popped out of my aunt’s mouth: ‘But it’s too big. It must weigh 10 kilograms. A lot of money. I can’t afford!’
Still crying, she put the basket on her head and crossed the river to take it back to my cousin.
Sixteen years have passed. I have got an immigration visa and am waiting to celebrate the last T?t in Vietnam. My aunt has turned an extreme Buddhist nun. She abstains from every animal product, even milk. Eating an egg before her eyes is an insult. The sight of a bowl of raw blood pudding would make her vomit. No meat is allowed in our house. No even ch?ng cakes. In the house, T?t is only present in the memory of a poor distant past.
But there is an atmosphere of T?t everywhere around, on the little concrete paths, in the crowded open markets, in the sounds of firecrackers which despite the government’s ban are still smuggled in from China, in the pink peach buds, and in the excitement on the kids’ faces, in the songs about spring from the public loudspeakers, which normally I find irritating. A festive and sacred atmosphere, which I can find and feel only in Vietnam. This time next year surrounding me will be only nostalgia and homesickness. Next year, winter has just begun where I will be living while here in my home country Vietnam spring has started.n

Above: At a spring festival in Xuan Pha village, Thanh Hoa Province, northern Central Vietnam. Photo: Nguyen Anh Tuan. Below: Chopper and board at a pig stall in the Ha Tien Market, in southwestern Vietnam. Photo: James Gordon

‘The main festival of the year is religious. It is T?t, on the first day of the year [which day is also called T?t, or T?t C? ? Ed.]. [Several days before T?t] fifteen sorcerers go through the streets with musical instruments and stick on the doors of wealthy houses notices invoking evils. They receive a meal and money in this hellish parade.
‘During the last night of the year a big bamboo is planted in front of doors, surmounted by a canvas containing betel, areca and lime in gold and silver paper. The bamboo remains seven days, during which time creditors cannot reclaim payment. Before the festival, people get new clothes, clean and decorate their houses and prepare meals for ancestors. On the first day of the year, in the morning, having lit lanterns and incense, the people begin greetings to ancestors, offering tea. Then they wish aged relatives a happy new year. During the day, they give two more meals to ancestors, with fruit and sweets. They do this in the way they would for living people. This goes on until the third day, when there is a meal to farewell the ancestors. For three days the people divert themselves with a great many fireworks, drinking liquor and eating all sorts of pastries.’
? From Le Tong-Kin, by Edouard Petit, Société Franscaise d’Imprimerie et de Librairie, Paris, 1900. Tong-Kin or Tong-King, Tung-King, Tonquin, Dong-Kinh was in the late 18th century and early 19th century the area of present-day northern Vietnam.

Usually gambling is considered an evil but during T?t no one frowns on betting game involving children or elderly, men or women, farmers or civil servants. Gambling can extend to offices and last till the end of the first moon.

Quarrels are dropped for T?t. Whatever belongs to the outgoing year must be set aside for a new year full of hope to set in. During T?t no one wants to be received with ugly words or a long face.