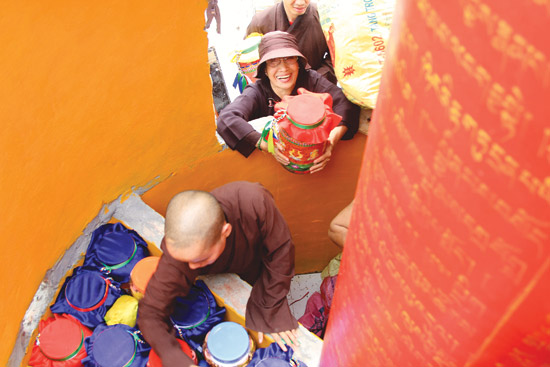 Worshipped Buddhist stupas (burial mounds) in Vietnam are numerous, but as for stupas that belong to the Vajrayana Buddhist tradition, the only one is in Tay Thien. The thing that distinguishes a Vajrayana stupa from other Buddhist stupas is the enshrining of the stupa.
‘Mahayana Buddhism only bears the tradition of placing votive statues within the stupa. In Vajrayana Buddhism, ensconcing votive objects in the stupa is very important. People never worship empty statues or stupas,’ explained Ven. Thich Thanh Tinh, who resides at Tay Thien Phu Nghi Pagoda. ‘Y?m’ (enshrining apotropaic, votive, or sacred objects) sounds mystical, but actually it is just ‘ensconcing items into the heart of a stupa and sealing it tightly.’ The interesting thing is that not just eminent monks, but anyone can participate in enshrining objects in the stupa.
In early 2012, I joined the enshrining of the stupa in Tay Thien Phu Nghi Pagoda in Tay Thien of Vinh Phuc Province near Hanoi. The stupa had four levels made from concrete and a steel framework. The base of the stupa was round, with an area of about 1,600m2 and partitioned into many compartments. Sacks of cereals filled the compartments towards the east. Kinds of rice, corn, and beans were put into cloth sacks, which were heated in candle wax. Wheat flour, tea, cookies, and cooking oil were placed individually in tightly sealed plastic jars. There were even jars containing nothing but money. Everything was ready to be enshrined. A wisp of cinnamon and anise propagated down towards the base, and incense permeated profusely.
Master Thanh Tinh elucidated, ‘Grain foods are ensconced in the east so that the Precious Stupa will bring sustenance and warmth to the people. Money is ensconced in the south so that everyone who comes to pray will have adequate money. The west is the realm of Amitabha Buddha, where gold, silver, precious stones, and jewelry are enshrined to pray for an abundance of resources in the country. In the north, work implements like plowshares and hoes are ensconced to develop all trades, weapons are stored away to prevent wars, and pipe tobacco (thu?c lào), cigarettes, and opium are hidden away to end all social evils.’
In particular, every compartment has one to two pale golden urns made of metal, which are the first to be enshrined. In the precious urns are kinds of cereals, the five medicines, and the Five Treasures: coral, agate, mother-of-pearl, gold, and silver, ‘[which] along with the heartfelt prayers of all people are placed inside. When the precious urns are placed down, it all creates a power that allows the precious urns to fulfill all the prayers of sentient beings,’ the master explained.
The pagoda, along with thousands of pious Buddhists, had to spend over a month preparing everything that was needed to perform the enshrining ceremony. The Great Precious Stupa (Dai Bao Thap) of Tay Thien, at that time (early 2012), was no different from a construction site. All the work was done by hand, including tasks that could have been done entirely by machine such as pulverizing clay. Therefore, a number of Buddhists brought with them hammers from home with them, and they didn’t neglect to bring face masks.
The clay powder was mixed with kinds of medicines, finely ground by the venerable monks. Then it was kneaded with water taken from the sacred lands of India, Bhutan, and Nepal, mixed with the tranquil waters drawn from the stream junction atop Tay Thien peak, and poured into molds to form miniature stupas called ‘tsa-tsa’ so as to be placed inside the Great Precious Stupa. From the center of the bottom of the tsa-tsa, people bore a hole in order to stick a sutra inside. There were approximately 20,000 tsa-tsa. On each tsa-tsa, 108 tiny stupa impressions stood out in relief. Master Thanh Tinh said, ‘The tsa-tsa are enshrined so that a person who performs the ritual of the Great Precious Stupa will incur the merits of worshipping millions of stupas.’

Moving tsa-tsa to be placed in the stupa; A dragon dance in
celebration of the stupa project; Inside the stupa

Anyone can participate in all of the activities, except for the enshrining of the sutra scrolls, for which you must adhere to a prolonged vegetarian fast. Long strips of paper on which sutras are printed (in Sanskrit) are coated with a thick golden perfume and dried. Then they are tightly rolled, lacquered in vermillion, and put in a plastic jar to be enshrined at the top of the stupa. The top of the stupa will be enshrined with a Buddha statue from the time when Sakyamuni Buddha was still present in the world. This rare and precious Buddha statue was offered by the Ven. Dharma Lineage Patriarch Gyang Drukpa (an Indian). The venerable himself came all the way onsite to carry out the crucial initial stages back when the place housing the Great Precious Stupa was still a vacant plot of land.

The second level of the Great Precious Stupa will house a crystalline Tree of Life. On it is ensconced over 100 Buddha statues (each one being about 50cm high). The level close to the worshipped earth will have statues that are two meters tall. Around the Great Precious Stupa, rows of bronze cylinders that enshrine sutras within them are installed. Everyone will simultaneously circumambulate, chant incantations, and spin the cylinders, immediately stirring ever so many incantations along. ‘When they are thus spun, they produce waves of energy that pervade expansively and continuously, bringing peaceful well-being and good fortune,’ described Master Thanh Tinh.
In distinction from most stupas in countries that follow the Vajrayana Buddhist tradition and are esoteric and hermetic, the Tay Thien Great Precious Stupa shall leave open the greater portion of the space inside.
[Pious Buddhists frequently haunt a stupa, circumambulating clockwise in order to express their devout veneration.]