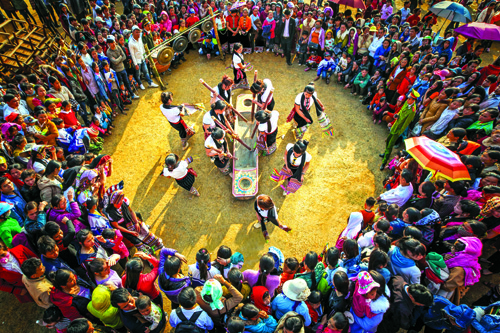 The joy of fertility and continuity

Pounding rice in a wooden gutter with pestles has been a practice by people of Thai ethnicity in Nghe An Province since the beginning of time. When the work is finished, they continue pounding to make joyful sounds. Due to the pleasing musical quality of the pastime, the ancient Thais gave  shows or  held  contests on the occasions of New Year, festivities, weddings and religious ceremonies. This practice continues today.
Thai people in Nghe An Province have a unique culture with a lot of peculiarities. With a population of 265,591, this is the largest among five  minorities scattered in nine  mountainous districts of the province.
Occupying nearly 16,500 km2, most of it forests and mountains in the north of Mid-Vietnam, Nghe An is the country’s largest province. The population is about 3 million.
Today, these typically Thai sounds and rhythms continue to echo around the mountains of Nghe An Province.
The art may look elementary, but in fact, it requires a lot of skills. A closer look reveals sophisticated and deep meanings of the show (called kh?c lu?ng) that carries features of culture and routine life of the Thai people of Nghe An Province.
Kh?c lu?ng is an all female performance.  A number (normally 8) Thai women in traditional dress hold pestles and stand on both sides of a 2.5m long, 45cm wide wooden gutter.
As a roll of drums announces the beginning of the concert, the players strike both the inside and outside of the gutter with their pestles to make different sounds.
The gutter represents female genitalia and pestles represent male ones. Rice pounding is an imitation of intercourse, according to fertility cults which worship human genitalia. For that reason, culture experts say that kh?c lu?ng is very typical for peoples of this faith, such as Thai.
There are three kh?c lu?ng styles. In ‘gut bouncing’, the players beat the inside walls of the gutter to make deep, resounding notes. ‘Weaving’ style imitates weaving movements and the rapidly repeating sounds strained threads make on a loom. The ‘cock fight’ style combines both of the above styles with the two sides knocking together the other end of their pestles to imitate the lively moves and sounds of a cock fight.
Thai people consider the ‘cock fight’ style the pinnacle of the art of kh?c lu?ng, which can be done only by highly skilled performers.
From far away, the echoes of kh?c lu?ng rhythms urge party goers to hasten their pace to join the fun.
­­