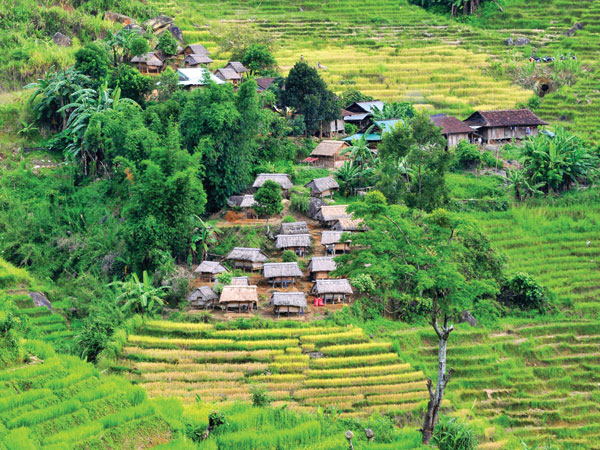 The kingdom of the rice deity

Dwelling at the foot of Ngoc Linh Mountain, Quang Nam Province, the Xe Dang people value rice above most other things. At the end of each harvest, families and villages pray to the rice deity and place rice into a granary. Their granaries are built far from the village and not guarded, but the rice is never stolen.
Village elders say that people used to live in stilted houses with a fire always kept inside. Village fires often broke out when everybody was busy in the fields. Also, villages were always located near river banks and often suffered from flooding and landslides. That’s why they had to build their granaries far away from the village.

Receiving the rice spirit
Elder Ho Van Xat from Tra Linh Commune, South Tra My told us, ‘The rice deity is very important and revered in the spiritual life of the Xe Dang people. It is believed that good crops are awarded by Him and bad crops are a punishment or reprimand from Him. After each harvest, Xe Dang people have a granary festival to pray to their gods and to receive the rice deity to the granary to rest.’
In the granary festival, Xe Dang people make horn cakes, pot wine, bamboo tube rice and kill pigs and chickens to consecrate to the gods and to treat their neighbors. The celebration moves from house to house. Some wealthy villages even beat gongs to make it livelier. The consecration and reception of the rice spirit at the granary is very formal and ceremonial. Only the elders have the right to conduct this important ritual. The Xe Dang still preserve the custom of stretching a cord to bring the rice spirit to the granary. They believe the rice spirit will follow the cords and the marks along the way to come to rest at the granary and enjoy their gratitude.
Having prepared a nice berth for the rice deity in the granary, villagers begin to party from house to house, and from village to village. They have fun, get drunk and forget about their days of hardship.

Rice kept in the granary where it is believed that the rice deity resides.

Remarkably, although Xe Dang granaries are far away from their village without any protection, the rice is never stolen. Each family uses rice from their own granary, without ever touching another family’s rice. The granaries became a symbol of a village’s wealth and unity. A village or a family with many granaries is surely one with happy life.
Mr Dinh Van Yen of Tra Vinh Commune said, ‘a granary is a household’s fortune, earned with sweat and hard work. So, the people highly respect each other’s rice. Since time immemorial Xe Dang villages instituted strict rules to eradicate bad intention. A villager who has committed theft will be fined a cow, a buffalo or a pig. Repeated felony is punished by banishment. Villagers deeply fear the rules and punishments and never touch other people’s property, even a grain of rice. That’s why in highland communes such as Tra Linh, and Tra Cang, the rudimentary granaries stand firm and calm through time and weather. They are kept even cleaner and tidier than people’s houses.’

A dance of the Xe Dang people in the granary festival.
Photo: Nguyen Thanh

Today in South Tra My, besides the households’ granaries, the Xe Dang people have come up with the idea of having a common granary. After each crop, households contribute a part of their rice and maize to help those in need and to use in turbulent times. They have also learned to use new building materials instead of bamboo and thatch to better preserve the precious provisions. As science and technology were introduced, many households now have to have as many as three granaries to stack up their yield. But rudimentary or strong and advanced, the granary today is still believed to be the kingdom of the rice deity. And so people value and respect every grain of rice.