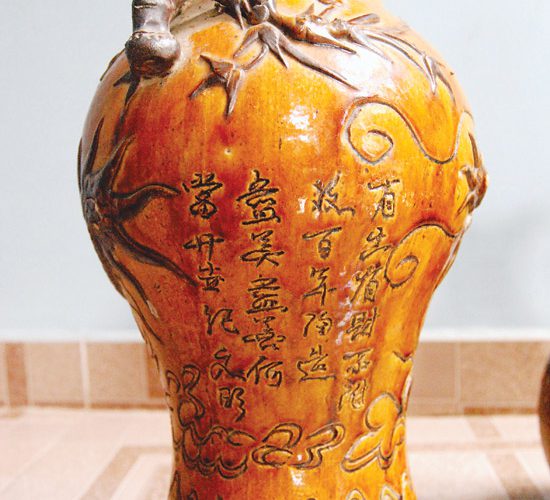 The last of the ceramics artisans

Over 200 years old, My Thien – Chau O, in Binh S?n District, Quang Ngai Province, is a village, famous in Central Vietnam and Central Highlands for ceramic products. Withstanding the tides of new industrial products that led to the extinction of many ceramic villages, My Thien – Chau O ceramics still retains its modest foothold in the market, due to unique features.
Sitting near 1A National Highway, 20 kilometres to the south of Quang Ngai City, My Thien – Chau O is conveniently located for production and transportation of goods to trading sites. ‘In the past, the traders came to grab our produce directly from the kilns. Beside the areas of Quang Ngai, Quang Nam and Binh Dinh, My Thien – Chau O ceramics was well known as far as in Hue, Quang Tri, and the Central Highlands’, Mr Dang Van Trinh, 51, the village ceramics artisan, said.
Mr Lam Du Xenh, a famous antique collector and a Chau O dweller, thinks that My Thien – Chau O ceramics made it as far as China for sale by some Chinese who lived in Chau O. ‘Although there are plenty of ceramic goods there (in China), but the things we made had a particular beauty, shape and style and were strong and cheap. So, as my dad told me, every time they went home, the Chinese who settled here, always brought My Thien – Chau O goods as gift to their relatives there or to sell.’ Mr Xenh said. According to him, the fact that the village goods reached far was due to waterways. A canal was dug to let traders’ boats from Chau O River into the village to get the merchandise.
Having collected My Thien – Chau O ceramics for over 15 years, Mr Xenh has hundreds of ‘antique’ artefacts from the village. In the eyes of a keen antique collector, he said, the earthenware and enamel of this village are quite unique, giving a special touch to the products, attracting buyers and creating fame for the village that lasts even to this day. My Thien – Chau O ceramic containers such as pots, jars and basins, especially the big ones, have delicately beautiful shapes, styles, colors and ornaments, and are strong and long-lasting. Dr. Doan Ngoc Khoi, a historian and vice-director of the Museum of Quang Ngai Province, who spent many years researching Chau O – My Thien ceramics, thinks that the sturdiness of the village earthenware is due to the technique of mixing local clay and silt, then burning the ceramics in closed kilns for three days and nights. The colour of these materials, together with the temperature, has given the products a rich variation of colours as well as the natural glossiness, which makes My Thien – Chau O ceramics so unique. Artisan Dang Van Trinh recalls how happy Mr and Mrs Louis Cost – Leedom Lefferts, specialists from American Freer Gallery of Art and Arthur M. Sackler Gallery, were when they found their way to his kiln in 2007 to study and confirm that a ceramic jar they had in their museum in the US was, in fact, an original product of My Thien – Chau O. ‘They said they had visited ceramic trading villages from the north to the south of Vietnam before finally reaching My Thien – Chau O to confirm the origin of the jar. They valued that jar because they thought My Thien – Chau O earthenware was sturdy, had beautiful colours and shapes, and glossy skin without the need for enamels.’ Mr Trinh told us.
With regard to enamel products, the enamel used in My Thien – Chau O ceramics is a kind of light fire-coated enamel, rich in colours and designs, especially on the items with reliefs on the surface. The ceramics have to be burnt in a closed kiln, taken out to be enamel-coated, and then burnt a second time in an open fire. The colours can be preciously golden, elegantly blue, freshly green, or combined into many others. ‘Notably, the enamel colour can be very versatile during the bake, creating distinct variations and nuances on each item. That’s what makes My Thien – Chau O ceramics so unique.’ Dr. Khoi remarked.
There may also be verses or notes of the time of production written on My Thien – Chau O enameled ceramics.
After the war ended in 1975, there was an attempt to revive the village’s craft through a cooperative. The cooperative fell apart after six or seven years, and then only six families maintained their kilns until 1992. As business was bad, five of them gave up, and only artisan Dang Van Trinh still keeps it going. ‘It takes big capital, and the margin is low. As the land now is given to the farmers, we don’t have the materials needed. Making money is now much easier in other professions, so the young ones are not keen to learn the art of ceramics making. The artisans are now all old; nobody wants to reopen their kiln. It worries me about the preservation of our ancestors’ craft.’ said artisan Trinh, keeper of all the secrets of the ceramics of the village.
Dr. Nguyen Dang Vu, Director of the Department of Culture of Quang Ngai Province said that the department is working on a project to ask for government’s budget to assist the preservation of the ceramic craft of My Thien – Chau O.

Text and photo by Huynh Van My