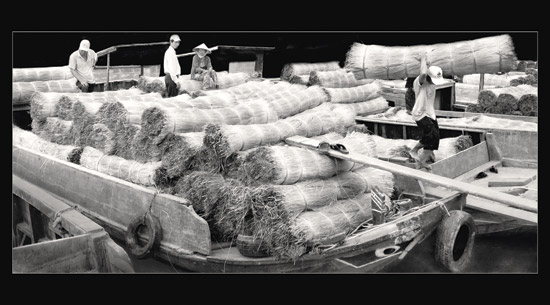 Famous not only for its endless paddies, stunning lotus ponds and sweet fruits, such as Cao Lanh mangoes, Chau Thanh longans, Lai Vung tangerines and Phong Hoa grapefruits, Dong Thap is also well known through its delicately woven pairs of straw mats and intriguing stories about a unique ‘ghost bazaar’ at Dinh Yen Commune, Lap Vo District. First-time visitors to Dinh Yen are always quite curious about a bazaar that used to open at midnight.
No one knows how long the Dinh Yen ‘ghost’ bazaar had been there. It used to be held from midnight until early the next morning. At nightfall, the people in the commune began carrying their mats, intricately made by hand, in a long procession. In the dark, their long line looked like a marching battalion of ghosts. According to some unwritten rule, no one was to light a lamp before midnight. Any lamp lit up before that time would be smashed by the bazaar guard. After midnight, the trade began. First-time visitors would also be surprised that one could buy mats in pairs. Nobody would sell just one mat, not even to a fellow villager.
About 5 years ago, the ghost bazaar stopped opening at midnight. Roads here have been upgraded, and mat makers stay home and wait for wholesale buyers to come and buy in lots. The bazaar now only functions during the daytime. People only come to buy sedge, which is transported here from other places. Mat sellers don’t have to grope their way to the bazaar. Gone are the gleaming lights after midnight, the lively noise of solicitation and bargain. The local people feel some nostalgia for the ghost bazaar, but in return their life today is easier, better, and their traditional local trade is flourishing.
Nowadays most mat makers buy sedge from nearby Vung Liem – Long Ho, (Vinh Long Province, or Long Xuyen Quadrangle, but in Dinh Yen there still is one sedge grower, Mr Hai Gu, who spent over 40 years of his life to grow sedge and make mats.
Standing by the sedge field, with worries about the sedge harvest, Mr Hai Gu shares his thoughts, ‘Ever since I started doing this, I gave all my heart to make beautiful pairs of mats. That’s why I still grow sedge. Mats made of sedge grown here are more beautiful, make you feel cooler, and don’t get mould. I have to go to Vung Liem, Vinh Long Province, to buy the good bulbs to plant here, and then it takes a lot of care to make them grow tall and beautiful as you see it now. I harvest the sedge every four months. Mat making is very hard. You have to cut, classify, split, dry and dye the sedge to have good sedge threads. Good sedge harvest earns you enough for living, but if the insects strike, you are in big trouble. People ask me why bother, why not buy sedge elsewhere, why live in uncertainty every cycle. You see, I have been making mats all my life. Even when at a loss, my conscience doesn’t let me make low-quality mats that are not beautiful.’
Dinh Yen Commune and Lap Vo District have truly been transformed since the new roads were built. Most of the rudimentary looms have been replaced by modern machines three to four times higher in capacity. But a few families still cling on to the ‘old spirit’.
Ms Doan Thi Oi’s is one of those three families. She is ranked a maestro in the village. Once the most glamorous girl in the region, she was ill-fated to have lost her husband too early, who left her three kids. It did not end there. Soon after that, her two younger children were paralyzed in both legs. ‘Since then it became an urgency for me to make high-quality beautiful mats to earn enough for my family. Besides, I don’t want people to use products that are not perfect,’ she said.
Her children have inherited her high spirit. Nguyen Nhu Y has mastered all the quintessence of the mat making trade. Soaked in great efforts, feelings and will power, the mats her talented hands make are extraordinarily beautiful.
Leaving the mat-making village and ghost bazaar of Dinh Yen, I seem to still hear the call for buyers, the bargaining, and the vibrant life of this remote area which is changing day by day, flourishing with its traditional product and with the flowers that are strong enough to overcome fate and give their aroma to the world.