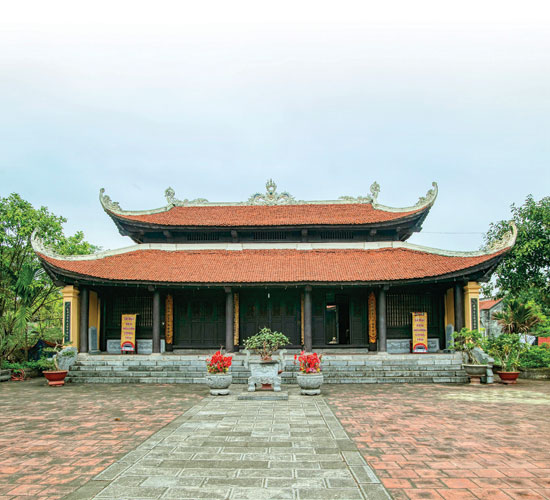 The man who pushed the sea back

Incense smoke is always floating in Nguyen Cong Tru Temple at Quang Thien Commune (Kim Son, Ninh Binh Province). Generations of descendants never forget the deeds of the ancestor who pushed back the sea for new settlements. Especially, at a time when China is trying to assert its possession of the East Sea, Nguyen Cong Tru’s legacy is increasingly instilling in today’s generation the sense of honor, patriotism and determination needed to defend the heritage built by their ancestors.

Tien Hai District of Thai Binh and Kim Son District of Ninh Binh are the land that 200 years ago Nguyen Cong Tru, with his impoverished followers, expanded toward the sea for new settlements. With the same spirit, many seashore communities continue expanding the land seaward.
Mr Nguyen Quang Dao, an elderly neighbor of the temple, said, the area was notorious with devastating tidal waves. But Nguyen Cong Tru and his people were relentless. The swampy, marshy land didn’t yield to people’s moving and dyke-building, but neither did the people give up. A genius organizer and leader, with 63 recruiters and 12,000 pairs of strong hands. Nguyen Cong Tru accomplished building the Kim Son sea dyke in just over a year, and in the 10th year of Minh Mang reign, Kim Son district was officially established.
Nguyen Cong Tru was an outstanding planner and builder of irrigation systems. First, he connected An River with Can River to get fresh water. Then, to every big village or two small ones, he built roads and dug canals to flush future floods and wash the unbalanced ph, and to optimize land use for paddies. The roads and the canals were built at the same time. Boundaries were defined for every new settlement. Dwelling and paddy areas were separated. The life of new settlers quickly stabilized. And so, only a few years after Nguyen Cong Tru brought his people here, Kim Son became a prosperous area with fertile land, advanced irrigation and healthy people.
Nguyen Binh, a newsman who came with me to Nguyen Cong Tru Temple said, ‘Nguyen Cong Tru was so wise to have advised the Nguyen court to name the two new districts Kim Son (Gold Mountain) and Tien Hai (Silver Sea). The depth of our ancestors’ patriotism was infinite.’
As the birthplace of the Vietnamese petrol and gas industry, Tien Hai today is a golden land, spearheading the economy of Thai Binh Province.

Kim Son currently has 27 communes, sharing an area of 213 km2. From the 12,000 pioneers, its population today has grown to over 200,000 people. At the same time, Tien Hai has a town and 34 communes on an area of 226 km2, and a population of 203,000 people.
200 years from the time Nguyen Cong Tru came here to make new land and settle, the Kim Son people have expanded their dykes 7 more times, pushed back the sea and made their land longer and wider.