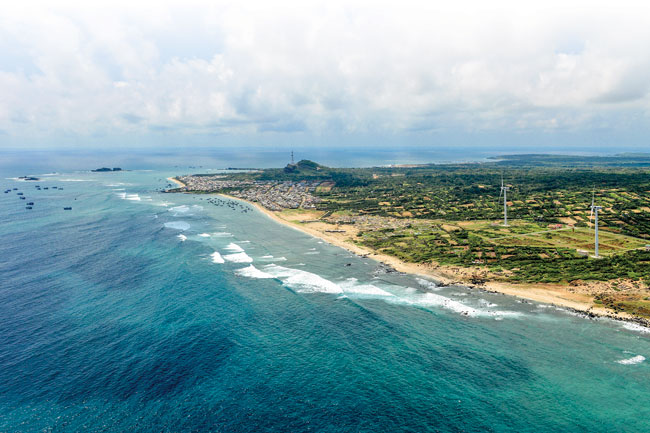 The masters of Phu Quy

Three cultures have left their mark on this
heritage site, and the world is richer for it

Phu Quy is an island district of Binh Thuan Province, a habitat of prehistoric people that has wells, graves, shrines and pagodas, with traces of Sa Huynh, Cham, Vietnamese and Chinese civilizations intertwined. It also has beautiful sceneries, peaceful beaches and fearsome rock faces.
Phu Quy District consists of 10 islands with total area of 17.82km2, 56 nautical miles to the east-southeast from Phan Thiet. The population is about 27,500, concentrated on 16.5 km2 Phu Quy, the biggest island of the 10.
The only way to come to Phu Quy is by boat from Phan Thiet harbour. It takes a high-speed vessel about 3 hours to reach the island.
Having found intact stone tools on Phu Quy Island, Vietnamese archaeologists have confirmed that Sa Huynh civilization did spread to this island in the middle of the sea 3000 years ago.
Sa Huynh, one of the oldest and most prosperous civilizations of Vietnam, existed from 1,000 BC to the 2nd century AD.
Four graves and Five wells dated from 13th century, almost intact, and folk legends led the culturologists to conclude that the next masters of Phu Quy were the Cham of Champa Kingdom, which ruled the Southern part of Mid-Vietnam from 192 to 1832.
The customs, rituals and other ancient religious edifices such as temples, pagodas etc., which were undamaged but weathered by time are proofs that later on, the Viet and Chinese people came here, mingled in harmony with the Cham, creating a cultural mixture unique to Phu Quy.
According to the district Peopleâ€™s Committee, Phu Quy has over 30 vestige sites, most notably the Princess Ban Tranh (daughter of a Champa King) shrine, built in the late 15th Century, Master Sai Nai (a Chinese) Temple, built in late 17th century, Linh Son Pagoda, built on a 80m height in 1747, and Thanh Lam Pagoda, built in late 18th century.

The most special relic on Phu Quy is Linh Quang Pagoda, one of the oldest pagodas of Binh Thuan Province, built in 1747. Sitting on a solemn hill of My Khe Village, Tam Thanh Commune, Linh Quang Pagoda was recognized by the government as a National Cultural Heritage in 1996. It contains many antique items such as Buddha statues, drums, bells, and most notably, many royal decrees of conferment.
The second relic frequently mentioned by tourist-explorers is the An Thanh Temple, recognized by the government as a National Cultural Heritage in 1996. Built in 1781 on a white sand beach of Trieu Duong village, Tam Thanh Commune to worship the whales, it houses nearly 100 skeletons of whales and leatherback sea turtles. Adhering to Viet traditional architecture, the templeâ€™s structures include the main edifice, ancestral shrine, and martial spirit shrine.
Most visitors praise and locals are proud of the beautiful sceneries of the district such as Cave Fall Beach, the Masterâ€™s Grave, Tranh Island, and Bird (Hai) Island. But what I love best is to stand on the slopes or top of the hills and contemplate the tiny colourful human existence amongst the vastness of the sky and the sea.
Perhaps the best place to see and feel it all is the 85m high top of Cao Cat Hill. From this hilltop, one can see also old shrines and temples, now appearing, now hiding behind the canopy and dense dwelling structures of populated areas.
The hill is by itself an attractive site to see with spiraling stairs, and rocky promontories and caverns. At the height of 80m is the time-weathered Linh Son Pagoda, and an impressive statue of Avalokitesvara stands majestically on the hilltop. These elements combine so organically, as if to demonstrate the sacredness of the wild nature.
After a reenergizing hike around you may want to cool down on the wide beach with fine white sand of Trieu Duong bay beside a singing poplar grove.
Adventure lovers wonâ€™t miss a chance to explore the other islands around Phu Quy. The most interesting one is Hon Tranh, the second biggest island of the district, which is just 0.6km2 and a 15 minute boat ride from Phu Quy. Itâ€™s also a habitat for chameleons, sea snakes, rock lizards, flat crabs and egrets. Rocky promontories and white sand beaches line the island. There is a shrine for a hero who saved King Nguyen Anh. The people on Hon Tranh are all marine soldiers ready to share their stories about the sea and to help those in need.